In the last several days, the liberal media and it’s little snot-nosed child social media have been quick to pass judgment on officer Casebolt, the cop involved in the McKinney, TX pool party arrest video that’s been making the rounds this week.

I’ll even admit, the video is hard to watch. The cop not only waves his sidearm at a group of unarmed teenagers in a vulgar display of rabid authority, he performs a tactical barrel roll at the beginning of the video that’s so cringeworthy and embarrassing that it’s almost as hard to watch as eye-surgery videos.

But before you let your liberal sympathies jerk your knees all the way back into your own face, maybe you should consider the video in context. Maybe you should hear from someone that actually lives in the neighborhood – someone who was there.

Luckily an account from a resident is available – in jpeg form – and it’s somehow on the desktop of every pro-police conservative on Facebook. It’s proof that the cop is good – a 100% real post from a man who most definitely lives in the neighborhood in question and was most definitely there: 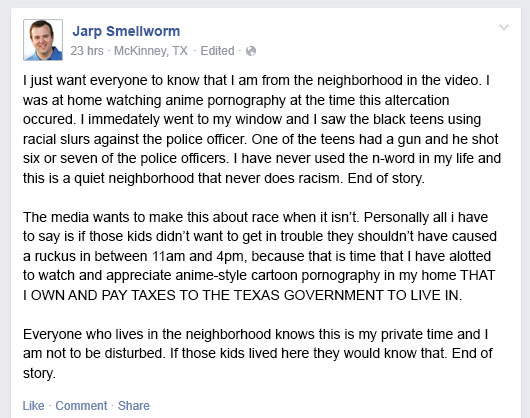 As you can see from this screenshot, this is a real Facebook post, which is 100% verifiable and 100% proof positive that the police are good and we should appreciate them. Maybe now that you have some perspective, you’ll rethink all those other cases of police brutality we’ve seen in the last year or so.

Please share this 100% real image with all of your liberal friends, it’s the best way to win the argument whenever they point out the blatant overuse of force in the video in question. It’s the only way to prove that racism isn’t real, and that the police are good, and that the president is Muslim. Thank you.

Do We Have To Be Offended By Everything?

How To Meet The Love Of Your Life

The Secret Of The Miranda Rights

The Only Way To Love Is To Love Hard

How To Get Dumped

A Modest Treatise On #YesAllWomen For The Men