Well I’m not sure what Mason has done now, but apparently he’s infuriated one of our neighbors simply by tooling around the cul-de-sac as boys are wont to do.

This “man,” Mark, is an asshole who leaves his tools in his driveway and acts surprised when people take his tools and sell them for beer money. Not that I did that, but if I had I don’t think I would be in the wrong considering the awful things he’s writing about my son:

Just look at this one: 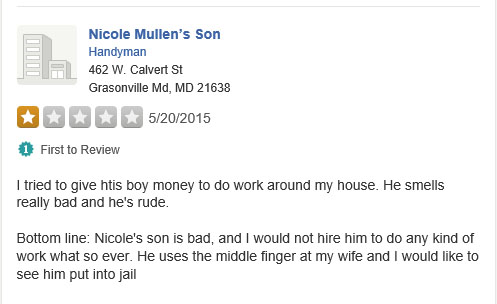 First off, Mark’s wife is easily 400lbs and a complete bitch. He’s mad that he offered my son money to do work and my son flipped off Diane. Why is he offering my son money to do work? He’s a child. It’s illegal for them to work. At his age (13) he should be wandering around the neighborhood, going into people’s things. That’s what young boys do. Mark can’t blame him for that and he can’t blame Mason for flipping off his fat wife; she brings it on herself by acting like she’s hot shit when she could easily pass as a stand in for Gilbert Grape’s mom.

Here he bitches about Mason wearing a diaper around the neighborhood: 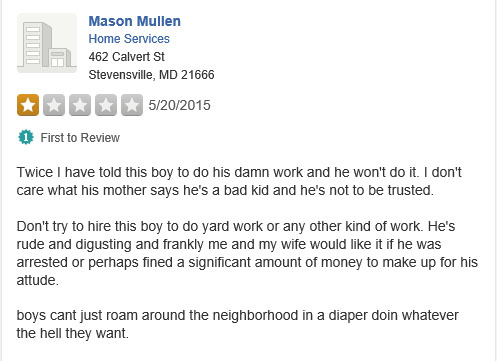 What, so I’m supposed to just let Mason shit his pants while he’s out going through people’s trash? Brilliant thinking, genius. I’m sure you’d win father of the year with that logic. 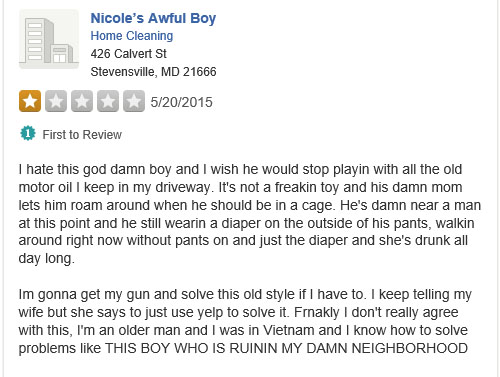 And what the hell were you going to do with that motor oil anyways? It’s just sitting out there, and if Mason wants to play with it that’s his god damn choice. Like you said, he’s almost a grown man now, and it’s no longer my job to teach him right or wrong.

The best part of all of this is he keeps calling the police thinking that wearing a diaper is a crime. They show up and tell him and his fat wife to calm down and then we all go back inside (except Mason) and this cycle continues. This is how it’s been for years, until now, when Mark decided to take this fight to the internet.

Here’s where you fucked up though, Mark: I’m not just some drunk mother with a diapered man-son who likes to steal tools, I’m also a journalist and if you want publicity, you’ve got it friend. So go on readers, let this piece of shit know what you think of him and his wife.

Nightmare Neighbors: 34 People Share Their Tragic Tales Of Living Next To Morons

Seatbelts And Autism: Unbuckling The Truth