Sometimes photojournalism does a big fail, even though it’s better than regular journalism because it uses objective images rather than opinions and therefore it is impervious to bias and misrepresentation. Today is one of those fail days.

In trying to document the severity of the flooding in Oklahoma and Texas, AP photogs snapped a picture of this man, who looks like he couldn’t be more pleased with the biblical deluge: 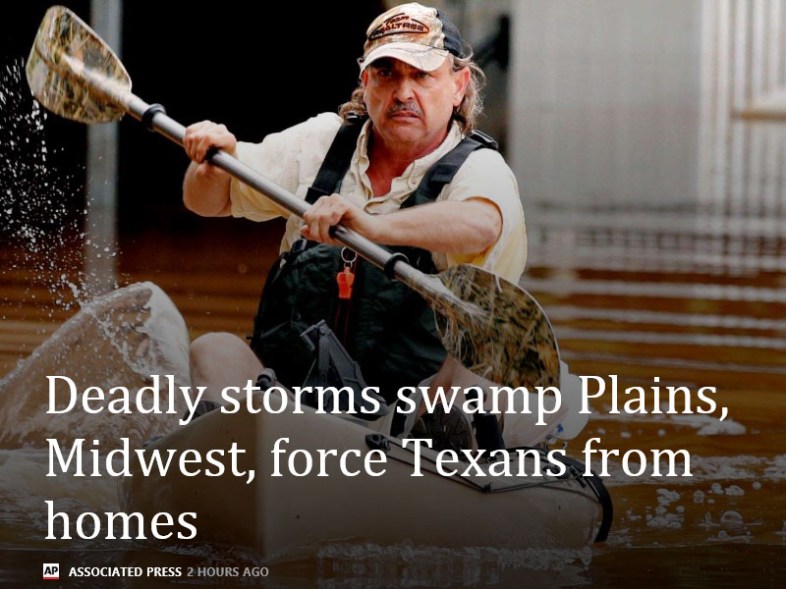 This guy could not be any more excited about the flood. This is the moment he’s been waiting for his entire life. Carefully preparing himself for the day he could row his Kayak through town, showing up all the soft-palmed lilies that laughed at his rugged individualism and his borderline addiction to smoked meats.

I just love this guy’s aesthetic. It’s like if they got diaper-era Brando to play John Voigt’s character in Anaconda, but instead of the world’s biggest snake and a boat full of researchers, it’s a small boat filled with Coors Light and it’s just one man’s mission to capture the world’s largest wife.

Everything about him is perfect. Look at that determination. Look at those Carhardt overalls and the gas-station baseball cap. You can’t make out what it says but I’m sure it has something to do with both 1) live bait and 2) a cuss word. The safety whistle on the lanyard is like a little swamp-cherry on the top of the grease-cake. This is a man of diluvian perfection.

I mean, there’s no way you have camouflaged oars for your rescue kayak unless you’ve been preparing for this flood your entire life, which I’m sure he has. This guy looks like every reality show on TLC fucked the second amendment, got it pregnant, and they decided to do a natural birth in the back of a monster truck using one of those naked lady cigarette lighters as a midwife, swaddling the newborn in an empty bag of hot & spicy pork rinds while removing the umbilical cord with a Bowie knife.

Think about how much that mustache smells like beef jerky. I guarantee you he’s never shaved it off. It’s not even body hair at this point, it’s just sodium and little pieces of denim.

To The Girl That Saw More In Him Than He Could

This Is The Kind Of Guy You Should Look For

This Is How Dexter Should’ve Really Ended

Everything You Need To Know About Choosing The Right Guy