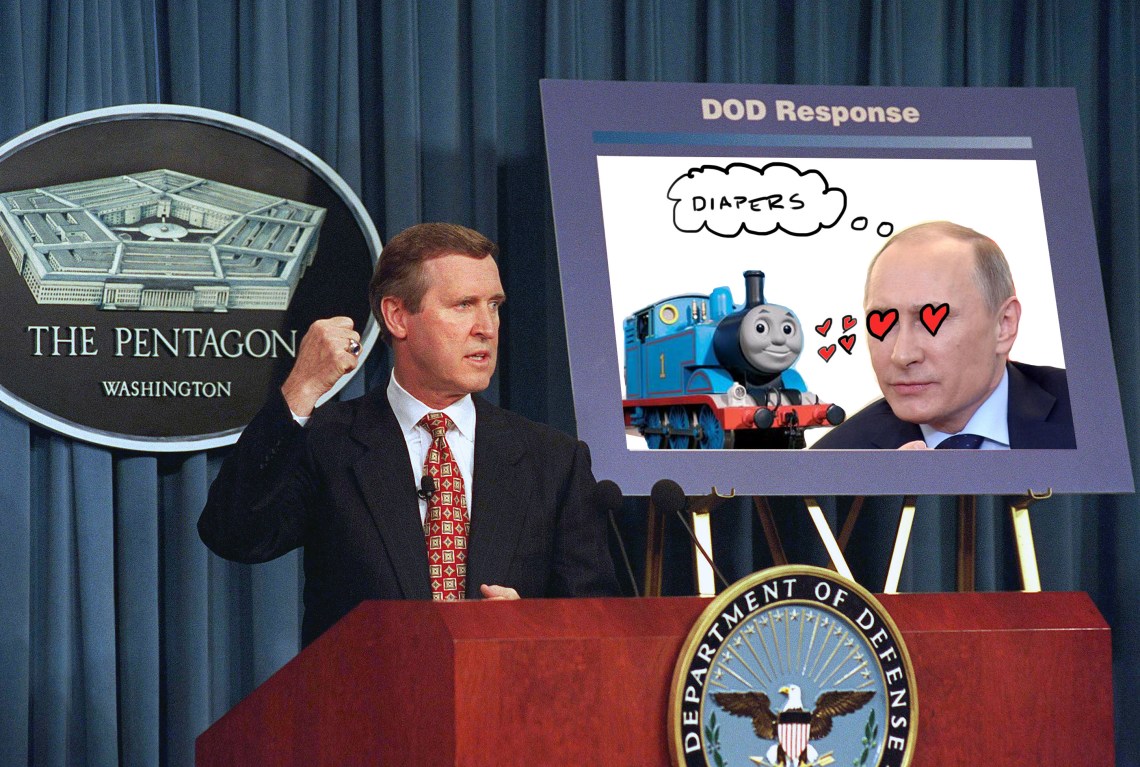 A four year study unveiled at the annual Pentagon press summit about who is bad and why they are bad, has determined that Russian president Vladimir Putin is, in addition to suffering from Asperger’s syndrome, “a huge diaper baby,” according to both experts in the fields of psychoanalysis and military strategy.

“We used extremely military intelligence methods to figure out that he’s an annoying diaper baby,” said LtCol Masterson. “He’s basically a fag and a loser and he gets beat up and he never has sex.”

A chart, projected on the screen behind the podium, indicated that on a scale of “low functioning autism” to “high functioning autism,” president Putin sits closer to the lower end, represented by a picture of himself that had been drawn, “anime style.”

“He’s in love with Thomas the tank engine,” added a general in the audience, turning to face others in attendance. “He thinks Thomas is cool and he wants to make babies with Thomas. He draws pictures of himself conducting Thomas and they’re drawn real shitty and he probably traces.”

Computer experts working with the Pentagon explain that they had hacked into a DeviantArt account that they believed to be associated with the Russian president’s email address. DeviantArt is a website frequented by many who identify as having Asperger’s Syndrome, a neurological condition that has been removed from the DSM, and is therefore really just a set of personality traits and idiosyncrasies.

“He’s got Asperger’s,” said the general. “He’s a sperg piece of shit and I hate him.”

“Look at this drawing he did of Waluigi as a werewolf,” said one of the computer experts. “First off that doesn’t make any sense, and why is werewolf Walugi out during the daytime? And why is he having lunch with Sonic? They’re not even from the same universe and if they were they wouldn’t be friends.”

“That’s how you know he has autism,” said another. “They do that thing where they draw Waluigi pregnant or as a werewolf for some reason.”

The speaker went on to explain that there was “a very high probability” that Putin wears diapers.

“He probably wears diapers, because he likes them and he poops in them so he can jack off to the diapers and act like a baby.”

“I want to smash his DS into a bunch of pieces,” concluded the general.