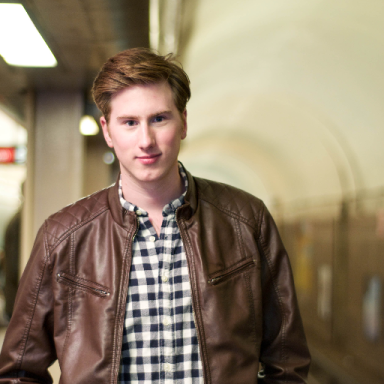 I’m just going to acknowledge the elephant in the room: Evan Peters is hotter as a fem. There, I said it, now we can move on.

Well, another season of American Horror Story is here. Hopefully, you’ve enjoyed the last 10 months of regular breathing and quiet, blush-free evenings and not having a heart attack every Wednesday night. But sorry—not anymore! We’re back for the apocalypse, so keep the paramedics on standby while we once more return to the hellish clan of homicidal showrunners, that is the friendship between Ryan Murphy and Brad Falchuk.

If last season’s Cult was about the divergence of the American people after the election—liberal characters collectively seeking out the scripted equivalent of a big hug, and Trump’s fervent base expecting a sort of legitimacy that says not only are they important, but they are also right—then the first hour of Apocalypse was about the fears of the aforementioned liberal populace realized.

Twice during the episode, summarily titled “The End,” footage of a newscaster reporting on the literal end of the world deadpans to the camera: “I can’t believe we actually did it.” He’s referring to the nuclear war that has erupted, with the first missile launched from our own backyard.

As the bombs drop, we meet a pair of teens, torn from their families for their special DNA and sent to live in a creepy bunker, where people are divided into a bare-bones class system: Purples and Greys. The Purples get to live a life of sitting around staring at fireplaces and eating gelatin cubes—ahh the height of luxury—while the Greys have to do all the work. Honestly, this is some Dystopian YA shit I was not expecting. But, good on Evan Peters finessing his way into becoming a Purple. Evan Peters is THAT BITCH.

In true YA fashion, the teens quickly fall in love and are forced to keep their illicit romance a secret from the terrifying glares of Ms. Venable (Sarah Paulson) and whatever Kathy Bates’ name is. Just like the food they consume, they must also ration their love. And no, that wasn’t a clever pun on my part, one of the characters actually said that. Seriously, did Stephenie Meyer write this episode?

Also cloistered away are a slew of seemingly more interesting characters. We have Coco St. Pierre Vanderbilt (Leslie Grossman)—an aspiring Instagram influencer, and what’s left of her entourage: diligent assistant Mallory (Billie Lourd), affable hair stylist Mr. Gallant (Evan Peters), and Gallant’s grandmother, Evie—a pitch-perfect parody of an old rich white lady that couldn’t be played by anyone other than Joan Collins. Also in attendance are Stu and Andre, a gay couple whose presence in the bunker is a mystery for now.

It soon becomes apparent that Ms. Venable isn’t following the rules set forth by The Cooperative—the shadowy organization responsible for creating the various outposts around the world protecting the last of humanity. Venable is just using this fallout shelter to fulfill her own escape room actor fantasies, punishing and killing residents IRL to keep them in line. This culminates in the episodes only truly gruesome moment, when she and Meade fake radioactive contamination to justify murdering one half the gay couple—you know, so that thematically Evan Peters’ own gay character isn’t outshined in subsequent episodes. I’ll be honest, this scene was a difficult one for me because there was a lot there under the surface. First, as the two gay men are forced to strip and shower (Ryan Murphy always comes through with a naked Evan Peters cameo. Thanks boo boo!), scrubbed by masked men with hard bristled brooms, crying out in pain, as the voice of their capture recites that they must be purified echoes from above; it all felt like the brash religious doctrine that spurs the dangerous, and deadly practice of gay conversion therapy. Then, without missing a beat, Kathy Bates distinguishes the two men from one another. One is deemed “clean” and pardoned of further punishment, the other “dirty” and shot point blank. An HIV parable if I’ve ever seen one, and it struck a chord. Whether it’s the apathy that a lot of gay men have towards those living with HIV, because they themselves came up in a world with PrEP and the AIDS epidemic is largely forgotten, or the outright discriminatory language many put right in their own dating bios, advertising their love for “neg only” applicants. I have to say, the scene was short but packed full of substance—a hallmark of Murphy’s shows.

Not-so-coincidentally, the residents of Outpost 3 are finally served their first real meal since arriving. This suspicious timing leads to Andre’s already iconic line “The stew is Stu,” as the dinner guests begin sifting teeth and bones out of their soup. It’s immediately followed by Coco’s equally amazing delivery of, “Mallory, come here and put your finger down my throat!” Their little brush with cannibalism doesn’t have a great effect on the residents, who begin to spiral. All except for Evie, who seems to be right at home. I can already tell that Evie is this seasons’ sleeper hit, and I am waiting on pins and needles for her peak, in the same vein of Madison Montgomery’s Millennial Monologue a la Coven.

Then, before having the chance to fully comprehend what has happened on screen thus far, someone new showed up. Surprise, it’s Michael Langdon (Cody Fern), AKA the antichrist baby from Murder House, now all grown up with a cascading Connie Britton-esque mane that resident groomer Mr. Gallant will surely get his hands on at some point. Michael explains to Ms. Venable that before long her outpost will be overrun like the others, but that he had his own bunker with enough food and supplies to last a decade, but first, it was his job to determine who, if anyone, was worthy of survival.

And so that’s where we are. A little confused, vaguely uncomfortable, and a lot disappointed the witches haven’t shown up yet. That being said, this show is campy and colorful and solely intended to send you flying into a world of escape, which entails wild cliffhangers, unrealistic plotlines that start to derail around episode four each season, and shocking developments likely to spur a host of all-caps tweeting.

And so, with those descriptions in mind, it’s my honor to be guiding you through these weekly recaps wherein together we will laugh, cry, reveal our deepest fears and crippling insecurities, and try to unravel a few answers to the mysteries that befall the season.

‘WTF Ryan Murphy’ And 10 Other Thoughts We Had During Episode 9 Of ‘AHS: Apocalypse’