The scariest part of “Clue” is knowing that if it came out today, there’d be a fourth ending where the killer is Celiacs.

Whether he’s crying over his dead wife and her Socialist connections or running down the hallway like a mad man, Wadsworth is an absolute revelation throughout the entire movie, just as you are at every social gathering you attend, for better or for worse. You’re that little shit who asks your uncle who he voted for at dinner, knowing it won’t end well. Don’t. Instead use your powers for good, and slyly redirect the conversation everytime a relative asks if one of your siblings or cousins are seeing anyone. It’s good karma.

Colonel Mustard seems to have no idea he’s a dumbass. He fanatically guards his intellectual reputation and grins from ear-to-ear anytime he figures something out on his own, no matter how obvious the clues may be. He’s also a terrible liar, and has a penchant for strong drinks and hookers. All of these inadequacies make him an extremely amusing character to watch, especially since he seems to be kind-hearted in spite of his shortcomings, but none of this will serve you at the office New Years party. Take this opportunity to instead seem like a normal human being. Ask people where their kids are going to school and how their parents are doing after that operation. You don’t even really have to listen, just let people ramble on and on about themselves for a bit. They’ll think you’re cool. They’ll think you’re a friend. Then when it comes time to fire someone, they’ll axe some jerk who never asked about their kids. That’s how you stay employed, by being shrewder and more congenial than the rest.

She rocks the hell out of a black veil, and isn’t afraid to get her hands dirty, but also slurps her soup and it’s a 50/50 toss-up on whether or not she cut off her husband’s penis after murdering him. In any case, she is exactly who you want by your side when shit hits the fan, because she’s a true ride-or-die bitch. The only thing you have to worry about is making sure your little brother keeps up with the lie you told your parents together. Maybe it’s just what you got them for Christmas, maybe it’s how much you really drank when you two went out last night, or maybe it’s about what really happened to mom’s favorite vase that was found shattered on the floor at Thanksgiving. He’s the weak link, so best keep your eye on him. Pro-Tip: walk around the house singing “only two can keep a secret if one of them is dead,” in a hushed tone to really scare him straight.

You’re idea of getting into the Christmas spirit involves creating a marketing campaign for your company, centered around the Holidays. Your “company” may or may not be a high-end escort service, located in the DC area, with heads of state on your client list. You know that the perfect, magical holiday sold to us in commercials are nothing but a peppermint filled fantasy. This is real life, and yes, that is grandma on the back porch taking a hit of her doctor prescribed medicinal marijuana. Skip the required viewing of It’s a Wonderful (er—more like “White”) Life, grab an your coat and join grandma on the porch. You still would rather it be Thanksgiving, because it’s a holiday about the entire family giving Oscar speeches.

Mrs. Peacock is basically the batty second cousin (or aunt? No one knows) who found out about your Christmas Eve dinner on accident, shows up without an invitation, and assumes she’s the life of the party upon her first sip/pitcher of eggnog. She’s not wrong. She also can’t hear you. She has everything to say and she’s exhausted and she’s upset and she needs Wifi explained to her and she loves you and she forgot your name. Honey, what? Speak up. Did you know I was once a senator’s wife? Louder, dear. What? Oh, shut up. You know your way around a dinner party or two and can talk anyone’s ear off. Just remember that people love you for you, and that you don’t have to resort to bribes from Senator Peacock, just in a hypothetical example.

You are the first ever homosexual, or you might as well be. Such a sweet, sweet person. You’re completely harmless… or so they think. What everyone else doesn’t understand is that you’re the real star and everyone else is your supporting cast. Without you, everything would fall apart. You will inevitably ask someone if they remember Ali Lohan’s Christmas single “Lohan Holiday”? They won’t, no one will. People will try to gaslight you, saying it never existed, but you’re gay and you never forget the history of your people. 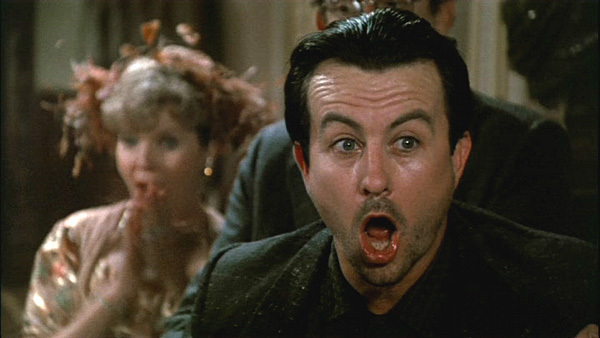 You never stood a chance. After sliding into one too many DMs, your side pieces all found out about each other and have been planning the perfect murder since Halloween. RIP Mr. Dad Boddy.

You’re easily duped, and only mildly aware of your surroundings, which will be your downfall when you attend the holiday party of your significant other’s family for the first time. Do not, I repeat, DO NOT take this lightly. These gatherings are built on traditions passed down through generation after generation, and family politics that take the length of entire marriages to fully comprehend. Seriously, these things are more complicated than the Warsaw Pact. Since this is your first time attending this particular family’s gathering, you’ll be told to bring the ice. They do this because this is some entry-level shit that no one can screw up. Bring lots of ice and that’s it. Nothing extra.

She sings, she dances, and doesn’t overstay her welcome; sadly, she cannot survive gunshots, and is willing to sleep with Professor Plum. Beyond that, there seems to be a lot of interesting things going on with her, in terms of sleeping with Plum and then trying to ruin his life, twice. You always get a head-start, and manage to snag yourself a cute, vintage holiday sweater before the best things get picked over. Don’t drive yourself crazy trying to narrow down the perfect gift for everyone, that is equal parts meaningful and practical, because honestly, it doesn’t make up for all the themed activities you jam packed everyone’s schedules with. And also, because it’s just the thought that counts, blah blah blah.

You’re pretty much the Dawn Summers of whatever party you’re at—inviting you was an afterthought, and no one remembers how long ago you got there. After having to get up at 5:30am to catch that flight back home, you realize you’ve accidently checked your laptop along with the rest of your luggage. Now it’s time for a game of Choose Your Own Adventure. You have the option of: (a) stopping by Brookstone to pick up an overpriced power-pack for your phone, which will be your only companion for the following 3 hours; (b) getting boozed up! Know what Airports have? Duty Free shops that serve up really nice liquors to you tax free. If you have nothing better to do, just get drunk and crack open your complimentary copy of Sky Mall—the premier collection of the world’s most unnecessary products—and convince yourself how badly you need a Hands Free Hair Rejuvenator, or an iPhone Bracelet Case; or (c) head to a Hudson News shop (there’s always one), and ask for whatever over the counter sleep aid they have. The last one is kind of a cop out, but it’s guaranteed to make your flight fly by.

You’re all about the long-con, and have been subtly dropping hints to your loved ones about what you need in the way of household or personal items since August. Things will not go your way and you’re better off skipping everything and staying in with take-out and a good movie. Make it a scary one because it’s so cold outside there’s no way any murderer would deal with that to try and kill you. Plus, snow leaves footprints, so you have nothing to fear.

You wish you were at home trolling Internet forums pretending to be deeply offended about various holiday-related issues that you actually couldn’t care less about. Instead, you’re on your way to your friend’s Ugly (but actually super cute) Christmas Sweater Party. Get there around, oh, cool o’clock or so. Don’t show up early or on time. Wait until you’re pretty sure everyone is concerned that maybe you aren’t coming at all, then you make your grand appearance!