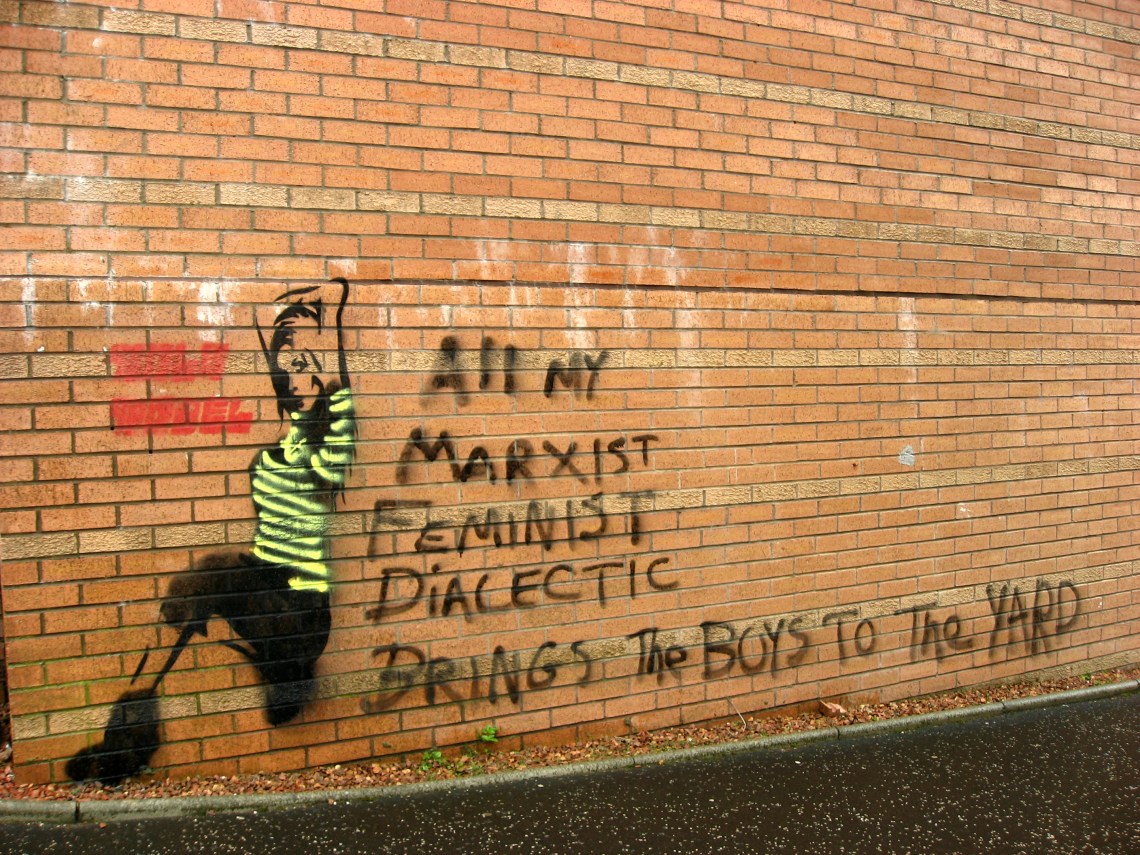 I read a lot of articles that talk about feminism. I also make a lot of comments, and comments on comments on feminism. From this, I’ve been exposed to a wide range of views and attitudes. If I was to put a theme to these conversations, it’d have to be ‘frustration’: feminists are frustrated that feminism isn’t given enough credence, or others misunderstanding feminism and; anti-feminists are frustrated because people can’t see that feminism is a load of crap and/or hurting our society. This article addresses those frustrations.

To me, it seems very clear that you’re going to get frustrated with feminism if you believe that all feminists are (for example): just angry, gay women or disillusioned beta males.

There is no “real” feminist or feminism, nor is there a right way to be a feminist. Sure there’s an official definition, but this is interpreted in a myriad of ways. If you identify as a feminist or a non-feminist and then you argue that the other group is [insert insult or compliment here], then you’re not doing anything productive: it’s just a way to put others down.

You’d think that putting others down is something that a feminist might object to, but when it’s about feminism itself, we can get very angry and strict (read: defensive) about how it. On the other hand, trying to pigeon-hole someone who identifies as a feminist into a group you’ve defined (angry gay woman or disillusioned beta male) is also going to end in frustration – for you and for the person you’re trying to pigeon-hole.

Bottom line: there’s no need to speak about feminism as if it’s a one-dimensional or unified movement: it’s multi-faceted and every type of feminist has a contribution to make.

2. Being a feminist (or not) has become part of people’s identity

Related to the frustration that’s found trying to make feminism one-dimensional, is that more and more people are identifying as a feminist (or not). For these people, it’s very likely that talking about feminist issues is also a discussion about who they are. When the issue is about who they are – how they see themselves – being in a space where you’re prepared to accept a different point of view becomes very hard. It also means that if someone actually agrees with the point you’re making but you identify as part of an opposing group, then you’re likely to hit unnecessary resistance.

I fully appreciate the need to identify with a cause or belief or community and I think everyone who identifies with a philosophy or a movement has the right to call themselves part of that movement (see point 1, above). I just wonder how many more productive discussions would occur if people talked about specific ideas, actions or systems rather than what makes them a feminist (or not).

Bottom line: if you want respect for your own ideas and to feel less frustrated by others’, try pretending like each person is an individual with nuanced opinions, not part of a uniform opposition.

3. People think equality is impossible because men and women are naturally different

There are three sources of frustration in this statement.

First, when this statement is based in evolutionary reasoning. The reason this argument causes frustration is because you can’t actually apply evolution backwards. I’m not saying evolution isn’t real, I’m saying that just because we are the way we are now, doesn’t mean it’s the consequence of evolution. Just because guys like big tits or large was it-to-hip ratios doesn’t mean those desires have developed from a survival/reproductive advantage. People have gotten so used to using evolution and “evolutionary psychology” to support their arguments that we ignore that it’s faulty logic to work it backwards without evidence.

Secondly, thinking ‘equality is impossible because men and women are naturally different’ will cause frustration if you think that ‘different’ is a neutral term. ‘Naturally different’ is exactly what has been said at various times and places about Jews, witches, people with dark skin, albinos and twins (to name a few) – all while people honestly felt like they weren’t saying being different was inherently bad. In our society, where values like logic or discipline or strength or independence are valued, saying women are more emotional or creative or sensitive or home-makers is not a neutral difference.

Lastly, when you actually try to interpolate this reasoning to any single individual, it falls apart. Well, unless you admit you want to take away a person’s right to choose how they live. If you accept people should be able to choose how they live, then telling them they should be a certain way because of their gender simply doesn’t work. How can you justify telling a person they should be more [insert gender-stereotyped characteristic here] simply because they’re a man or a woman.

Bottom line: we attach a value judgment to difference.

4. It doesn’t matter if we go against nature

My response is to point out that there’s absolutely no reason why natural is better.

Bottom Line: we have a bias telling us ‘natural’ is better. Resist relying on that if you want to be less frustrated trying to make your point. I also suspect that saying something is natural, is just short-hand for ‘it’s too hard to change our ingrained way of thinking’.

5. The idea that feminism is there to serve men as well

Nothing’s quite as frustrating as being told that something you don’t agree with is good for you. Take for example; “women having more rights than they do now helps men as well!” It’s like a red-rag for anti-feminists who talk about men are being discriminated against: ‘feminism is hurting men’s rights, not helping them!’

The idea that feminism is there to serve men is frustrating for a lot of feminists as well: for some it sounds anti-feminist, for others it’s just frustrating because people don’t understand why it’s true.

Promoting traits that aren’t inherent to a category (stereotypes) means that little by little, the people that don’t fit those stipulations are made to feel less accepted.

Bottom line: think about how being a ‘real man’ is related to not being a woman; there’s no need to be frustrated if you realise that assumptions about what women should be like is also telling men what they should be like.

6. Most sexism isn’t overt

I’ve had people (SO ANGRY THEY USE CAPS!) demand that I show them the law that gives men more rights than women, or tells women they can’t do something. This is frustrating for non-feminists because very few people can point to evidence like this (that they accept). The good news is that this frustration can be lifted because it misses the point. Most of the evidence of sexism doesn’t come in the form of explicitly sexist laws or policies or people. Sexism is insidious and pervasive and most of the time it’s about the unconscious way we think and act.

The evidence is in the way that advertising tells guys that if they have certain things, beautiful women will appear to satisfy their urges. Or in the implication that a guy can ‘deserve’ a woman – like she’s an inanimate object to be won. Do you feel entitled to stare at a woman you find attractive – even it makes them uncomfortable? Do you just accept the fact that your nurse is woman, but think it’s weird if it’s a guy? When a guy is talking about law/politics does it even register that he’s a guy? When a girl is talking about law/politics do you automatically think about how she looks?

In these situations, nobody is making a law or enforcing a policy or part of a conspiracy that’s designed to oppress women. And yet, all of these things reinforce the idea that women should be a certain way – and that way is not an independent, free, active agent in society.

In conclusion, feminism is frustrating primarily because it’s inconvenient. It’s inconvenient because it’ll require some of us to go against our programming and change the way we think and act. But it’s also frustrating because those who become aware of sexism’s insidious, systemic and unconscious nature means they face a daily battle with themselves, society and trolls in comments sections.