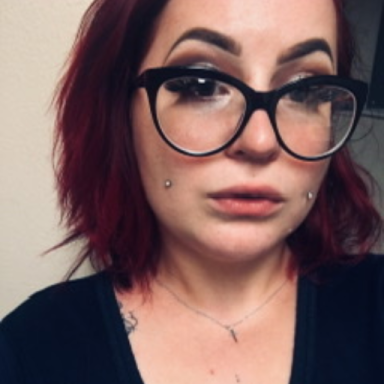 “Rock bottom became the solid foundation on which I rebuilt my life.” – JK Rowling

Rock bottom comes in different shapes, sizes, and colors. It can hit us like a stack of brick or can pass us faster than a blink of an eye.

As I was living the past few years—well really just existing—life was throwing me punch after punch. I was dealing with crippling depression, alcoholism, and being hospitalized at my local mental health ward four times in four months.

Every day I was drowning my mistakes and my sorrows in a bottle of vodka or a 12 pack of beer. I was in a constant state of numbness. Numb was my comfort zone, where I felt the most alive. How sad is that?

I was losing my grip on everything around me. I was losing friendships, relationships, and most of all, myself. I could not recognize myself or how I was treating the ones around me anymore.

I was showing signs of rock bottom for months before it actually happened. I thought it was after my best friend kicked me out of her house, but it hadn’t quite happened yet. I look back at the signs now and wish I would have accepted it sooner.

I officially hit rock bottom one night after 3/4 of a bottle of vodka. My depression whispered in my ear, expressing how miserable and worthless I was until I finally believed it.

Twelve Lortabs, nine Xanaxes, and seven Klonopins laid in my hand. I was sure this was my relief to end the misery. Two days later, I woke up to the sound of hospital monitors, not knowing what had happened. When I was told about how I spent two days on a ventilator, all I could think about was how disappointed I was to be alive.

Two days later, 3/4 a liter of Whiskey and 18 beers later, I knew I needed to get myself to the mental hospital or I wouldn’t make it through the night. I decided to get into my car, stupidly and regrettably.

Thank god I didn’t hurt anyone. I totaled my car, fractured my sternum, and tore some ligaments in my neck. I was immediately taken to the local hospital to assess my injuries.

After a few days in the hospital, I was transported to the mental ward, where I spent the next week building myself back up from what truly was my rock bottom.

I decided that I could not build my life back up if I kept drinking. Drinking kept me at the lowest point I’ve ever been in life, constantly feeling worthless and overthinking every part of my life. Since then, almost 60 days later, I have not touched a single drop of alcohol.

Another step that I made that truly transformed me was that I found my faith in God again. I found the love in myself that he has in me. I am saved, and so very grateful.

My life isn’t fully better, but I’m building it back up. One day at a time.