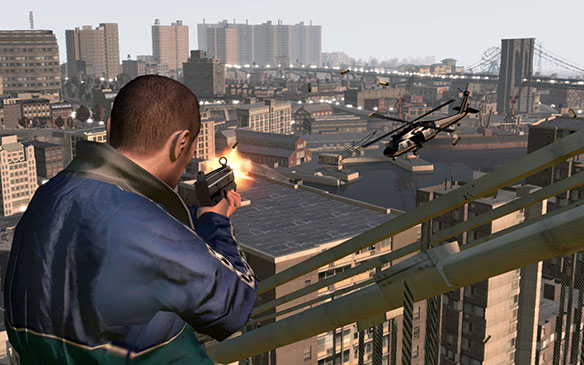 Each of these games helped me level up my soul… “Soul Level” is the combination of the challenges and all of the experiences one goes through life. This list demonstrates how I leveled up from Level 8 to Level 9…

Going to start the list with an unforgettable classic called Excitebike! This game is Trials before there was a Trials. You ride a bike. You perfect your landings. You change lanes. You make your opponents fall. You win. Has a really fun level editor. – 10/10

This rare Bungie gem is such an underrated classic. Tons of cool melee moves in this third person action game. Beautiful architectural design, and smooth animation for the time. This game was criticised a lot upon release for cut content, but maybe because it is so different, it is my favourite Bungie game. What is Halo?

I’ve been playing this game ever since it first came out on PS3 in 2013. Haven’t stopped since. Probably will not stop. I’ve seen the glitches, I’ve seen (un)successful heists, I’ve seen all the Online content, I’ve seen UFOs, I’ve collected all the peyote’s, I’ve seen, I want to say, everything, but there is always more to discover! Along with mods (on the PC), GTA V is probably the best game ever made by humans ever.

This 2-disc original PlayStation classic is a stealth action game that I would put up there with the original Metal Gear Solid (my favourite all-time video game franchise). For its time this game is killer. Slick story and cool gadgets like snipers with see-through-walls sights make this a one of a kind experience. IF you can look past the dated animation that is. This one will make you appreciate how far games have come.

This game is delightful.

There’s nothing like it out there, aside from maybe the Persona games, Persona 4 in particular, but the gameplay is nothing like it so not entirely. I love the anime setting and the cutscenes. Story is really cool too. The only part that’s maybe lacking a bit here is the gameplay, which is just levels with 3D climbing puzzles. Really unique and definitely left an unforgettable impression because of the story and anime cutscenes.

This survival game set in, you guessed it, Tokyo, is one of the best indie games I have ever played. The concept is so cool and gameplay is almost endless with many many animals to choose from and a unique “mating” mechanic keeps the cycle going. I love this game mostly because of its 100% accurate portrayal of the food chain.

I absolutely adore shoot’em’ups, or bullethell shooters if you will! And boy this one is a gem! The music is amazing, the graphics are spot on, and the speed and bullet patterns are perfect! This one is a must play if you like these types of games! Or even if you don’t, because the soundtrack is worth listening to alone! Other CAVE (the developer) shoot’em’ups are really good too, but I specifically like this one best because of the soundtrack and how colorful it looks!

I have probably spent more time playing this than any other game ever, because of the time period this game filled in my life. I was in school, lots of free time, and it was basically the only game around with this kind of scope and freedom in gameplay. As with all GTA games, to enjoy it to the fullest extent, you need community made mods. Like, you wouldn’t wanna miss out on Online Multiplayer where all your buddies are jumping around on Yoshis, you feel me? 10/10

This game is the very first 3D Adventure games I played on my own console, in my own home, not at a friends place. The moment I put this game in and saw the colours and the graphics, I knew this was the future! It looked so good, and I actually think it still does. The gameplay is so much fun, there are so many different varieties of levels to play, from more standard 3D platforming to crazy bike races and levels where you are being chased by a dinosaur or a rolling ball for example. To me all this is way better than Super Mario 64 ever was. (Sorry Nintendo.) Even the replayability is great with Crash Bandicoot 3 because after you’ve beaten the game, you get to play all the levels again, find secret paths, which will unlock secret levels in an extra secret world! There’s time trials and a challenge to collect all boxes in each level. Love it! 11/10

70% of my body is made of video games. Specializing in arpeggios, wobbles, 1-up mushrooms and disco basslines.

25 People On The Horror Game That Gave Them Nightmares

5 Terrible Video Games I Loved As A Child