Ingrid Goes West depicts a young woman, Ingrid, who develops an extreme fixation on an Instagram influencer. Ingrid takes extreme (violative) measures to befriend the influencer, and when the influencer becomes aware of these violations – by which time, the two have progressed into a true friendship – the influencer banishes Ingrid from her life. Devastated, Ingrid’s loneliness drives her to record a video of herself taking a lethal dose of prescription pills and publish it to Instagram. She announces that the video represents her true self and hashtags it “#iamingrid.” She awakens in a hospital to learn that her hashtag has gone viral, with get-well gifts sent from fans who applaud the video’s honesty.

The film’s ending – scored in bright, here-we-have-the-resolution notes – suggests that Ingrid’s suicide documentation saved the day as well as her life. Because of the publication, her romantic interest found her dying and rescued her. Because of her new fame and fandom, life post-suicide-attempt meets her with renewed inspiration to keep living: internet attention.

When I publicly called Spicer out on his reinforcing the effectiveness of attention-seeking self-harm, he responded that “the ending is meant to be ironic and/or tragic.” Tragic, of course, despite its bubbly scoring, the smiling nurse who reassures Ingrid she’s been met with an outpouring of love, and the earnest delivery of our romantic hero’s closer – “Your little video went viral” – followed by the audio of admiring Instagram comments in various languages. 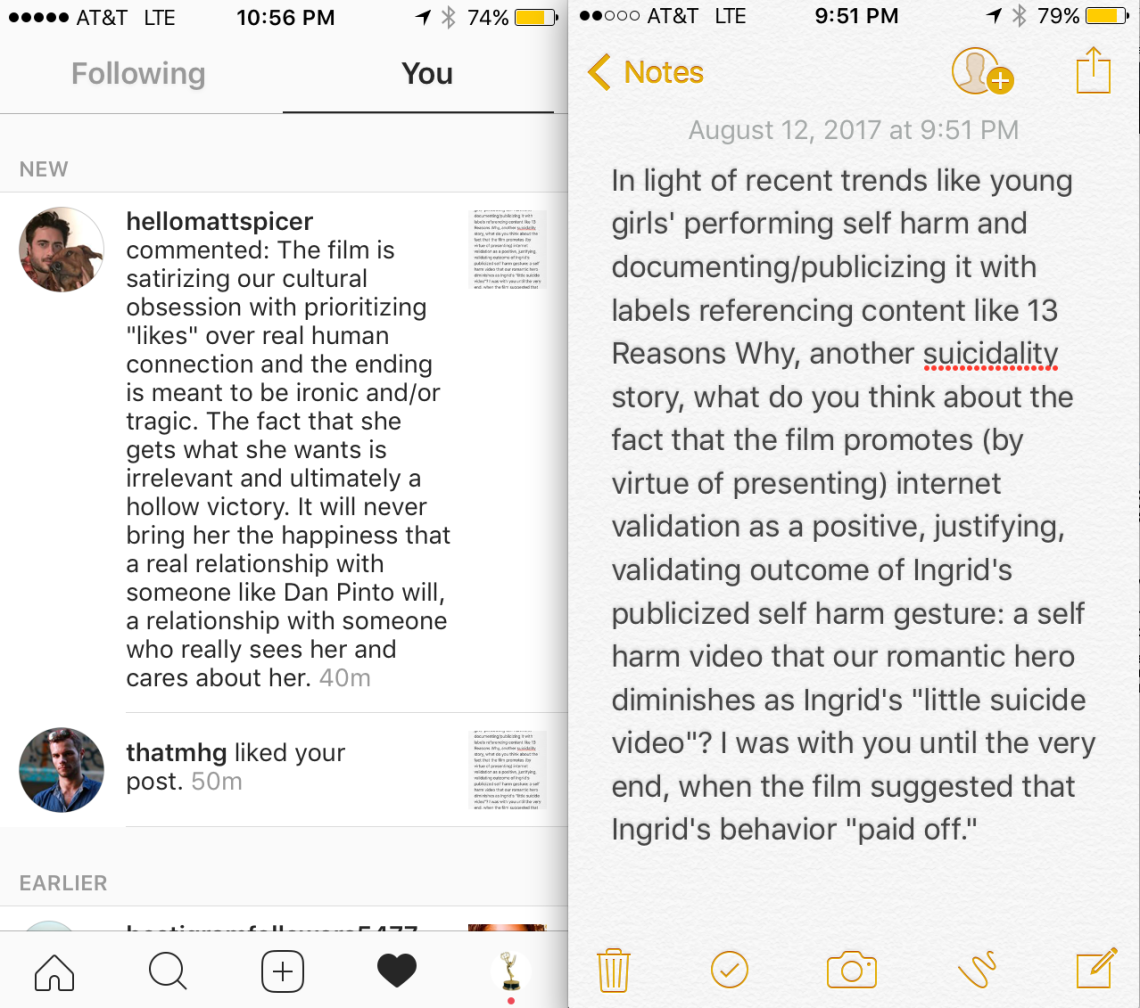 It seems Spicer assumed I wouldn’t have anticipated his response: one not too different from a Trumpian “It was a joke.” One reason why his defense entirely misses the mark: few viewers will follow up the way this viewer did. What this ending says to a young woman who feeds unhealthily off internet validation (an IV drip) and to anyone else who sees it: if you seek to provoke a virtual outpouring of love (if you want a way to feel less alone), documented and publicized self harm can help you reach your goal.

Even excluding the film’s ending, the truth remains that Matt Spicer, a young white man, sold a comedic depiction of a young woman with mental illness for profit. To be sure, the audience (and I) laughed with Ingrid in her more relatable moments (still symptomatic of her illness); for example, healthy people, too, endear themselves to others by pretending to hold similar interests. Even if not sexually attracted to women, many women form romantic fixations on one another. Relatable. In other moments, though, Spicer draws comedy from Ingrid’s more grave symptomatic behaviors: kidnapping Taylor’s dog, photographing every object in Taylor’s bathroom, spying on her for hours on end from close proximity, binging fries and beer in response to shame. Do some of these behaviors have a relatability factor? Maybe. Does it change the fact Spicer has, with Ingrid Goes West, sold jokes about symptoms of serious mental illness for money? Not at all.

The sickening reality: this act of monetizing a mockery of a young woman’s pathology (to depict the illness in its full severity doesn’t make the comedy any less of a mockery) will likely lead Spicer to prestige and power. He wrote and directed a believable story: believable characters, dialogue, and scenarios. Rare. I liked the film until the very end: a tragic ending in the full convincing guise of a valid resolution. The ending exposed the reality of the film on the whole: Ingrid Goes West manages to both exploit and encourage mental illness.

The Journey Of Accepting My Mental Illness

This Is How You Embrace Living With A Mental Illness

Your Mental Illness Is Not Your Fault, So Please Let Yourself Get Help