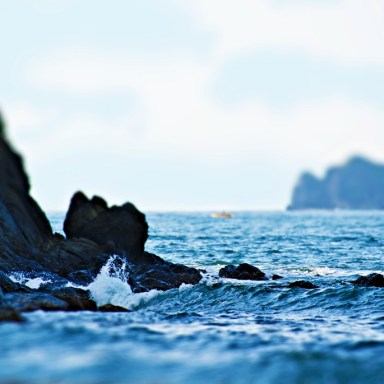 After moping around my apartment for almost three months while I nursed a broken heart, today I had let my roomies Jen and Myra convince me to go out with them for a girl’s night out. I was about to call the cab when the doorbell rang. I was surprised since I wasn’t expecting anyone.

I opened the door and saw Jen’s hunky boyfriend Majid. Originally from India, Majid worked at his father’s grocery store and gas-station while attending community college. Jen, who worked as a freelance photographer, would often say whatever he lacked in brain, he more than made up for it

Majid looked me up. It had taken nearly three days of non-stop efforts from my girls for me to say yes. But once decided, I hadn’t spared any efforts. I was dressed in a cute one-piece red dress that barely reached my thighs. My large breasts were threatening to spill out of its neck. Unlike Jen and Myra, who are genuine head-turners, I am a plain girl; the tiniest bit stronger and bigger than most men prefer.

Now as Majid stood with that insolent grin on his face, and looked me up and down without making the least bit of effort to conceal, I felt color rising in my cheeks. His gaze was so openly lascivious that I wanted to say something sharp and yet I find myself tongue-tied. I stammered something about getting him a cool drink and walked in our tiny kitchen. I nearly screamed and dropped the can of sprite when I turned and saw him standing behind me.

“Hey you look good,” he said in his thickly accented English. And to my surprise, I found I was actually enjoying the gaze of a man.

“Thanks, I guess, here,” I said and walked past him. He let me pass but I could literally feel his eyes follow me as I came back in the living room. I took my phone from my purse and started to call Jen. I noticed my fingers were shaking as I tried to enter the code in my phone.

“Hey doll, show us what you look like,” Jen said.

“Liste—“I tried to say something but she overrode me.

“Show us what you got girl,” she said. I reluctantly held the phone away and showed her my dress. Myra was with her and when they saw how I had dressed up, they did the appropriate ooh and aah noises.

“Listen Jen, Majid is here,” I told her finally.

“No, I meant why he isn’t in the frame, pawing all over that gorgeous bod?” she asked and winked. I felt Majid’s breath on my neck as everything became clear in a second. I felt my mouth so dry that my tongue felt like it weighed pounds.

“Hey babe, later,” Majid said and took the phone away from me and kept it on the sofa.

“She called me your slump buster,” he said as his work calloused palm rested on my fair, slightly plump thigh and gave a tentative squeeze. I drew a sharp breath and turned sideways. I also became painfully aware that my breasts, already squeezed to the limit to get into that dress, were about to spill out. His eyes followed mine and he gave a roguish smile that made me go a little weak in the knees. Damn, why are these working-class men so rough and gorgeous?

Majid put his hand around my waist and eased me against the wall. He bent down to kiss the top of my breast out of my dress. His face was full of coarse stubble that made me break in goose-bumps and almost involuntarily my hands pressed his head there. I knew now there was no turning back from here. The next moment, his hands reached behind me and raised my tight dress to reach inside it. He stood up and pulled me towards him for a kiss. His mouth touching my ruby red lips sent sparks flying all over my body. I made a muffled moaning sound and pressed my body against his. His hands cupped and kneaded my buttocks as his tongue pushed my mouth open and probed it.

When we disengaged, I tried to control the heaving of my breasts and stared at him. Again melting me with that grin, he reached and picked me up in his arms. I gave a squeal of delight. I had never been picked up and carried in a man’s arms like that until now. Majid didn’t show the least bit of effort as he carried me in his arms and carried me to the room I shared with Myra. He tossed me on the bed and as I gave another yelp of surprise, he stood over me, taking his white shirt off. His eyes never left me. I sat up in bed and slid away from him in a coquettish manner. He tossed his shirt aside and reached to grab me by my ankles. Then with one swift move, he pulled me towards him while he stood at the edge of the bed. He grabbed my hair and turned my head up and as we kissed again, his hands expertly reached behind me to undo my dress. The straps fell from my shoulders and sighed.

Majid stared at me without blinking for several minutes before murmuring “marhabba” as I sat at the edge of the bed, divested of the dress and now wearing only a set of brassiere and panties. His strong hands grabbed my shoulders, while his thumbs slid inside my bra. I closed my eyes and sighed. When he gave the slightest of the push, I went down almost too willingly. He paused only for a minute to discard his trousers before mounting me. Our mouths met in a long, wet kiss while he took my hand and wrapped it around his throbbing, circumcised dick.

“See how hard you made me,” he sucked at sweet-talking in bed, but then if what I had in hand was the beginning then I didn’t care if he never uttered another word in bed. His tool, like the rest of him, was gorgeous, strong and all-conquering. He didn’t have to tell me to spread myself for him. He supported himself on his elbow and we looked at each other for a moment, me lying in supine position, my tanned, slightly fleshy thighs spread, he all taut masculinity with a gorgeous organ hanging between his legs and I realized I was about to be busted out of my slump the way Majid seemed to do everything else- primitive, direct, rude. All man!

I let out a loud moan as he entered me and then wrapped my thighs around him. Our mouths seemed incapable of parting even for a moment. Majid’s large palms, rough like sandpaper, had cupped my large breasts and he kneaded them in a circular motion while his cock thumped its way inside my body. I threw my head back and let out a large sigh.

“Ya khuda—- kya khubsurat,” he had reverted to his native tongue, and somehow that was turning me on even harder. Soon the bedroom was filled with my loud moans, his panting and the special sound that a man and a woman’s bodies make when they attempt to fuse into each other. I had had my ex-boyfriend stay over a few times when we were together, but I don’t think my bed had seen the kind of vigorous activity that it saw that day. About half an hour (and three orgasms for me) later, when Majid gave me a painful love-bite on my breast and emptied himself in my body, I realized it was the first time I had let a man inside me without protection.

And of course, we were not done. As soon as I emerged from the bathroom, the brute pulled the towel I had around my breasts and made me kneel in front of him. I felt lightheaded with shame as he stood behind me and entered while holding my waist for support. After a couple of strokes, I grabbed the dressing table for support and allowed him to ride me like a wild bull. Within a few minutes, he was back to panting and thanking his creator. After some time, he bent to cup my breasts through my armpits and held onto them during the entire ride. We finished with me turning around and resting my bottom on the dressing table with my thighs wrapped around his middle. He kept sucking my nipples as he took us to yet another rip-roaring, earth-shattering orgasm. I barely remembered him carrying me to bed and placing me in it before I fell into an exhausted and deliriously happy slumber.

I woke up around nine with the girls back in the apartment and Majid long gone. After the euphoria, I was struck with some shame at fucking my best friend’s man, but Jen, the doll that she is, put me at ease by telling me this had been the plan all along. She told me that they had brought a bottle of wine and some eats and asked me to join them in the living room.

“Remember darling, men will come and men will go, friends are forever,” Jen announced as we hugged each other and got ready for a long night of girl chat. My slump was over.

A repressed housewife from the land of Kama Sutra. Every once in a while, I wear a cape and go searching for kinky sex.