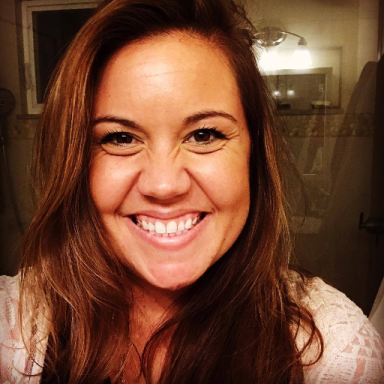 I had an outrageous amount of confidence when I was little. I often wore tap shoes as regular shoes, always said what was on my mind, and once made an entire birthday party sit down while I read each and every card out loud like a one woman show (it was really fun for everyone). My unabashed little kid confidence is best illustrated by the fact that I carried some core beliefs that came entirely from my own brain. Never did I think to question them or check with an adult, because why would I? I just believed them to be the truths of the world until someone discovered them and corrected me.

1. You picked a new name when you became an adult.

This one was unearthed by my first grade teacher when a picture of my family had two Cindys. One was my mom and one was me as an adult. She had to tell me that my name would always be Molly.

Apparently, whenever I wanted out of a conversation, I would just close my eyes. I thought if I couldn’t see you, you couldn’t see me either. Conversation done. I’m going to bring this one back, I think.

3. You could only pick one favorite song your whole life.

I remember telling people Ace of Base’s I Saw the Sign was my favorite song for like 3 years even though I was sick of it. I thought once you declared a favorite song, you weren’t allowed to change it… ever.

4. The priest at our church was Jesus.

I stand behind the solid logic on this one. He had a beard and all he ever talked about was Jesus. So, obviously, he was Jesus. Pretty sure I made his day.

5. I would be older than my older brother one day.

When Tim and I would fight, I would often throw out threats that started with “When I’m older than you…” For some reason I thought if I was five and he was six, in two years I would be 7… and he would somehow still be 6. No one wanted to break it to me that I would never, in fact, be older than my older brother.

Moral of the story: Little kids are the best and we should never grow up.