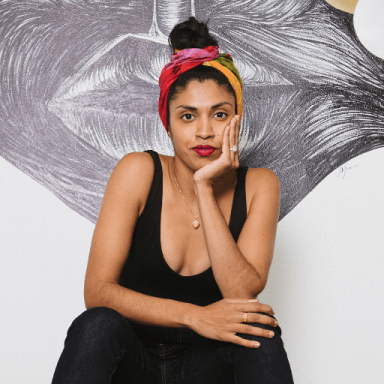 A fun fact about me is that my first name is Sompurna (SOME-PURR-NAH), but for the first 31 years of my life, I went exclusively by Mini. It’s a nickname that has stuck very well, and I began my art career with that name.

With a name like Sompurna growing up, roll call was especially painful by teachers who had never seen such a name, so that got phased out for Mini. My best friends in high school were named Sydney and Sarah, and I remember desperately wanting their blonde hair and hairless arms (so much so that I once bleached all my body hair before I joined them for pool party). I remember feeling ashamed of my first name Sompurna and anything associated with being Indian for most of my teens and early twenties. These feelings were always there under the surface, even if I didn’t have the awareness back then to speak up and talk to my friends about it in case it would make them feel uncomfortable.

White, affluent, hairless with easy-to-pronounce names — even living in a socially progressive town and having friends of all different ethnic and economic backgrounds, these were the core superficial attributes I lusted after as an upper middle class Indian girl born and raised in middle America. With only the clarity that hindsight provides, I can see now that was what being American looked like to me back then. And despite my parents best efforts to socialize me with other Indian kids my age, I couldn’t relate. They seemed to always do what their parents expected of them, and I looked down on them for being “those Indian kids who wanted to become doctors.” Hindsight is 20/20, and I could have given many of those kids the benefit of the doubt by being less judgmental. They were probably going through their own identity issues too.

Now, after living and working all over the world across a couple different industries, my definition of being American has drastically evolved. Being American means embracing that we’re a melting pot country and that our differences make that melting pot even more delicious to live in. What’s also given me perspective is the blessing of being in an interracial marriage with someone who is aware and open-hearted and is also caucasian. We fight and see the world differently at times, but I see myself better because we face the challenges of coming from different cultures head-on.

Now I think, Why the hell wouldn’t I want to embrace that name when it means that? It sums up everything I want to feel about myself and the world. This name reflects the growth I have experienced as a woman and as an artist. And interestingly, my name hasn’t been hard for most people to pronounce! I have been surprised by how many compliments I get when I’m out and about in LA.

One last thing: I’m not sure if others in my boat feel this way, but if you ever can’t pronounce someone’s name (first or last), just ask. I appreciate that you tried to connect and that’s all that matters to me. And when you try to connect, it shows you’re caring and open. And, in a small but significant way, it’s these moments of connection where shame, racism and otherness fades away. I know a lot of us can agree that we need more connection right now, so when in doubt, ask.

I paint with fire 🔥