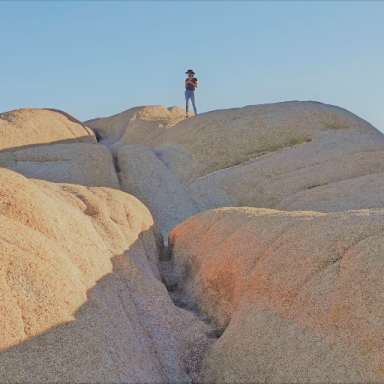 Slow like the tides as the full moon sets overhead. The moon makes its rounds with the changing of her phases, listening with the body. Going through each moment with a silent overview, unapologetic about the way that her face plays with the light of the setting sun. She is on the prowl in the darkness and isn’t worried about her lack of makeup nor her pock-marked skin, orange on the horizon.

Woman: the feminine. The divine energy. Grounded in her roots, taking in life and growing it as well within her womb. Woman is the mother, the daughter, the lover. She is the emotional pull of the changing tides and feels with the gravity of earth’s orbit. Her hair flows freely down her back in curls, spiraling with golden illumination.

She walks barefoot along the sand, catching the iridescent blues and greens of each shell that has washed up on the shoreline. Buried in the silence as the waves barrel over, lapping at her toes, she prances in the cold and cares little about how wet her legs become as she wades in and out with the pulls of the ocean. She is guided by her body, charged by the nights and the shifts of her own growing life. She is magnetic, pulsating in frequencies that attract lovers and friends while emanating a forcefield of boundaries.

Woman in love with her own uniqueness. While the world continues to spin around her, she settles into her own skin like a deep sleep under velvet blankets. The wind picks up and blows her curls across her face, creating a veil. With a lick of her lips that wipes away the saltiness from her softness, she digs her fingers into the ground and picks up each tiny grain of sand under her nails. The world is parsed down to the smallest bits, made up of the universe that spins around us.

She listens as the waves begin to rock with her soul, and her heartbeat pushes and pulls deeper towards the ocean. Like the kelp forests that flow with the underwater currents, she sways in gentle solace among the murkiness, finding clarity in the dark unknown. Centered inwards, the orbit of her world circling the glowing heart in her chest. She creates her own beauty instead of that which is plastered along billboards and painted across shiny magazine advertisements. She is salty and naked with her curves, her unmanicured eyebrows, and the dirt that remains calloused on the bottom of her feet. The earth is a part of her and she, a part of the earth.

This is a woman in her element. Dirtied and fashioned against the stability of the cultural sheep staying in their pen, eating the same grass day after day. With her wild hair, she is the lion unafraid to roar in her passion and fiery resolve. She chooses her own path in this journey of life and moves her slender, svelte body through the crowds as they cower in fear.

She is the keeper of secrets that she hides in her soul and yet sprinkles throughout the universe on her strolls and swims. Whispering through the trees, palm fronds gracing her skin in warm summer breezes and birds cheerfully greeting her as she passes by. While the sun kisses her skin and she glides her fingers across the blades of grass, soaking up each ray as it sinks into her soul, the exhale comes and the leaves float in a tidal dance with the oceans. In these coastal towns, she plays in smiles and laughs, wonder reflected off the waves she swims in and the grasses she rolls in.

The woman is our connection to the universe. Sitting in silence, in solitude, in reflection, she spreads herself out among the daisies and the weeds to take it all in. Both the sweet midnight jasmine that awakens her soul and the stinging nettle that leaves raised red bumps along her ankles. She is both the sun and the moon. She is fire and water, air and earth. She shakes her dreams loose as they blow away like diamonds to sit in the sky above, flickering in their glow of the lightyears she has traveled to be here as a child of this universe.

Nature turns me on and connects me more deeply to others.