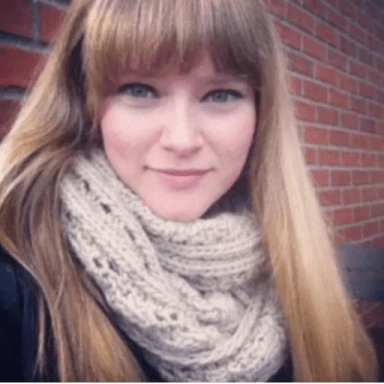 Get there a few days early, alone. Wander down Frenchmen Street at night and loiter on the sidewalk listening to jazz outside of Vaso, Blue Nile, Snug Harbor, The Spotted Cat. Eat a vegan sandwich at 13, and try to get through your fresh Tinder queue despite the BBQ sauce sticky on your fingers.

Get beignets at the green-striped Cafe du Monde the next morning and sit on the steps in front of Jackson Square, watching the tourists take selfies and horse-drawn carriages lumber by as you brush powdered sugar off your palms. Sit by the Mississippi River to finish your coffee, the chicory and cream thick on your tongue.

Walk aimlessly through the quiet downriver side of the French Quarter, remembering what the sun feels like on bare shoulders, and stop when an older local starts to ramble at you. Let him. Learn about the levees, the sandbar that New Orleans is balancing on, the long bridges that lead in on all sides, the city seemingly like an island.

He’ll tell you about nearby coffee shops you can work at—EnVie, Rose Nicaud, Who Dat, The Orange Couch—but then he’ll slyly suggest Lafitte’s Blacksmith Shop, just a block away, the oldest bar in the States, where he’ll insist you get “at least five” cherries soaked in bourbon for a sweet buzz.

It’s only 1 p.m., but choose the bar, and elbow past bridesmaids’ parties, and groups of men hitting on bridesmaids’ parties, to get to the old bar top. Order a gin and tonic, a safe choice, you think—hesitating for a moment at the icee tubs of Purple Drink daiquiris, a somewhat mystifyingly famous slushie that tastes like rum and grape Kool-Aid—then pull out your laptop and play the game: “How long can I work before this buzz kicks in?” Ten minutes later, half a drink in, tipsy and cool, close your computer and go to the patio, to the sun, for the best eavesdropping in the city.

Buy Purple Drink on your way to the ghost tour that night—which you’re ironically going on but secretly excited about—the thick Styrofoam cup heavy in your hands. Try not to hate the wooo boys who scream dumb questions at the tour guide and grope their pretty girlfriends; try to resist leaning over to the girls and saying, “Honey, you can do better than that popped-collar, khaki-shorts approximation of a man.”

Stand in a tight group on French Quarter corners and learn about the lonely ghost at Muriel’s who is now appeased every night by an empty set table, fine linens, a glass of expensive French wine; even ghosts in New Orleans want to be part of the party.

Learn that the tour guides don’t dare walk under the awning at the haunted LaLaurie Mansion, a place where spirits are known to leave with you—the mad scientist cougar and her twentysomething husband brutally experimenting with the shapes of their slaves in the locked room upstairs.

Learn that Faulkner used to hang out on his roof in Pirate’s Alley smoking a pipe and drinking and shooting BB guns down at passersby; learn that the ghost of Faulkner, apparently, still hangs around to grope female employees at the bookshop downstairs. Look at the wooo boys; feel unsurprised.

Walk past Touchdown Jesus, his shadow rising up from the statue at the back of St. Louis Cathedral, ghostlike with his hands up in the air, facing Bourbon Street with a shrug: Alas, I tried.

Walk back to the hotel, but stop by Balcony Music Club (BMC) for a quick Sazerac sweating in a plastic cup to listen to a set. Leave three hours later—entranced by covers of “Superstition” and “Valerie” and a few of the band’s original songs, by the trumpet and saxophone and double bass, by the normal-looking boy with the beautiful voice—their CD in your pocket, even though you literally own nothing that plays CDs anymore. You just couldn’t leave without a piece of that music.

On your way to get coffee the next morning, get caught in a hurricane. Stand under an old, broad Marigny awning with the delivery guys, the middle-aged tourist couple, the chain-smoking local man, and watch, trapped, completely powerless but somehow ecstatic, as sheets of water slice down, flurry sideways, and pummel the broken streets, fill the gutters in seconds, the water a white flash as lighting cuts through it. Miss the tornado warning on your phone, because you forgot to charge it. When the rain fades to mist after twenty minutes, stumble happily to the Cafe Rose Nicaud, your body thrumming.

When your friend arrives that night, walk him down Bourbon Street, just to see—past wooo boys en masse, dive gay bars with rainbow flags out front, fold-out tables with fortune tellers, voodoo shops, karaoke joints, strip clubs, buskers, everyone drinking out of plastic cups or tall, bulbous green Hand Grenades in the street. Then take him immediately to Frenchmen and wander past the tangle of locals and music-minded tourists for jazz at The Spotted Cat.

Meet a local boy from Tinder on neutral ground on Esplanade—what locals call the medians between one-way streets. Convince him and his friends to trek to karaoke at Kajun’s at the top of the Marigny.

When the sun comes up a few hours later, you’ll be surprised, blinking into the strong Southern sunlight, not having had that closing-time cue to go home. But before you leave, make out with the Tinder boy on the sidewalk in the whitewashed dawn light, sweet and exhilarated in your exhaustion.

Walk back to your hotel down empty 6 a.m. streets as your friend eats a breakfast po-boy from Gene’s. Sleep until noon.

Meet a local friend for lunch at Turkey & the Wolf in the Irish Channel. Get the triple-layer collard greens melt and a bourbon cocktail. Walk up Magazine Street and get District donuts and cold brew coffee for dessert. Then, sated, tired, lounge on her porch in the Irish Channel in a rocking chair, and smile and say “Hello” to everyone who passes by, and mean it.

End the night at the white linen tables of La Petite Grocerie at 10 p.m.—eat butter, fried oysters, chili broccoli, shellfish stew, shrimp and grits. Think about meeting up with your Tinder boy again at a bar nearby, but—sated, tired—go home and sleep for 12 hours.

Get brunch at 2 p.m. at Elizabeth’s in the Bywater, loud colorful walls and house-made hot sauce to pour over your eggs, your warm biscuits, your smoked pork chops and country gravy, your Bloody Marys garnished with spring green beans.

Stop again at Lafitte’s to say hello to your best friend from college, who also happens to be there for the weekend, and hug her hard and make her promise to call and tell you about her New Orleans when you’re both back home: following a second line parade, bounce music at Siberia, lounging at hip or kitschy pool bars across the city—Country Club, Drifter, ACE—where clothing is optional or nearly optional (women in pasties and men in suits that make banana hammocks seem conservative).

Wander to the courtyard of Napoleon House and relax with a quiet Pimm’s Cup as you plan your night. Say you’ll come back to the Katrina Museum.

Everyone will tell you to go to Bacchanal, a wine and cheese place at the edge of the Bywater, and you’ll think—I didn’t come to New Orleans for wine and cheese. But go because the Tinder boy is there.

Take a $5 Lyft from the French Quarter and walk through the wine shop to the back patio, huge and sprinkled with mismatched tables and white-iron chairs, recliners, strings of fairy lights, a jazz band set up beneath soft red light, a bar upstairs where the bartender will look at you and assume you want the Midtown Shimmy—gin and lime—but tell him you’ll get the Hibiscus Old Fashioned, the bourbon warm in your mouth, like the music feels.

Plan to go to the neighborhood bar, Mimi’s In The Marginy, but end up back on Frenchmen Street. Wander through the night Art Market that sells spoons shaped into rings and monsters drawn over maps, and into d.b.a. to drink another Sazerac, shockingly presented in a frosted glass, not plastic.

When the band is on break, and everyone is outside drinking and smoking and talking, take the Tinder boy to the dark back room of the bar and make out with him, like you mean it, and don’t worry about the footsteps you hear passing by to get to the bathrooms. Don’t stop kissing him just yet. You’re only in NOLA for a few nights.

End up at the Apple Barrel, a tiny one-room bar where you have to squeeze past the band to get in, and dance around. At 1 a.m., stumble to the food truck outside—a heavy white Ford with a grill sizzling in the bed, and watch your friend eat barbecued pork ribs, stealing bites of his baby potatoes infused with smoke.

When the jazz band is drunk and starts to play Green Day covers, walk your new friends to the neutral ground outside your hotel, the divider on Esplanade, and kiss the Tinder boy in the street before he disappears into a car, and then slink back to the hotel with your friend to eat fancy La Petite Grocerie leftovers with your fingers by the pool. Sleep hard and long and heavy.

Take your friend back to the Bacchanal patio the next day for happy hour, and watch him squeeze the lemon from his tall Tom Collins over his whole fish as you spoon fresh green gazpacho into your mouth and slide baguette slices through a mound of salted butter and fresh radish.

Drive past Treme, past the Central Business District, blinking in surprise at the skyscrapers that jut up beside you, reminding you that you’re in a big city, not just quarters of Spanish wrought-iron balconies covered in plants, Bywater shotguns, Garden District mansions, single-story neighborhoods of graves.

Walk past the stately homes on Prytania Street toward Hot Tin, the Pontchartrain Hotel’s rooftop bar for Mule Mondays. Litter the table with a graveyard of mismatched tin cups as you watch the sun sink over empty skyscrapers and older women in animal-print wrap dresses slow-dance to funk with college-age men.

Pass by the pleasantly sacrilegious church pews in St. Joe’s Bar to get to the globe-lit patio, and when everyone realizes they’re starving, head to Cooter Brown’s for late-night oyster and shrimp po-boys, sliding down St. Charles Avenue past the dark openness of Audubon Park and the thick stone Romanesque Revival façade of Tulane University, lit up in the night.

After you eat, slip around the corner and make out with the Tinder boy, like you really mean it, until your friend clears his throat behind you and tells you it’s 2 a.m. and time to go.

Kiss him again, hard, and casually agree: “If you’re ever back here, or I’m ever there—” But know it doesn’t really matter if you never see him again.

Have a Lyft drop you off at BMC for one last Sazerac, one last set. But it’s Monday, now, and closed already, so wander up the block to your hotel, the air still warm after midnight, still full of jazz slinking down from Frenchmen Street—and sit by the pool one last time, wordless and happy, sated and tired, letting your last moment in NOLA linger.

Writer & editor who spends a few months a year in Ubud, Bali