In the summer, Coney Island is a beacon for adrenaline seeking park goers looking to test their fate. However, in the winter, Coney Island is a place of little action. Except on Sunday afternoons. In the dead of winter, while everyone else is hiding in their apartment binge watching Netflix, a motley crew assembles at the Education Hall of the Aquarium with only one thing in mind. Running into the ice cold water.

Before arriving, I hadn’t put much thought into who would join a club dedicated solely to getting into a freezing ocean. And yet, I was surprised when I caught sight of the Polar Bear Club. Yes, there were a few eccentric people in the crowd, but it was mostly average Joe’s. A group of regular people who formed a bond by running into cold water every week. Sounds crazy right? But I swear, the camaraderie in the room is undeniable, and you’re welcomed into the family as soon as you say that you’re joining in the madness.

My friends (Pat & Lisi) and I arrived early and therefore had ample time to prepare ourselves. Preparing mostly meant standing outside without pants on to prep our legs for the cold. While hanging around, I ended up talking to several members, and the obvious question that came up was, “How long have you been doing this, and what makes you come back here every week?” Some started because their families have been doing it for years or even decades. It’s a non-traditional family tradition so to speak. Others like the rush. But my favorite answer was “perspective.” One woman explained how she use to complain about being freezing cold all the time. Now, when Sunday rolls around, she has a whole new outlook on freezing. 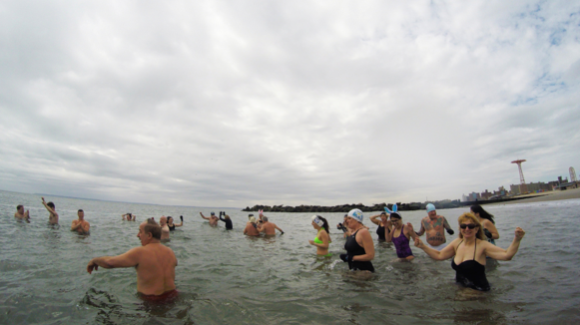 Finally, it was time to get in. We worked our way down to the beach hopping around like a group of unruly children in desperate need of Ritalin. Everyone formed a circle to do jumping jacks while yelling back an army style chant. Getting pumped up to run into freezing cold water was surprisingly easy. People were running around high fiving each other, and an animalistic nature came over everyone as they jumped up and down screaming. Just being near the members was infectious. Finally, everyone ran in, and we didn’t hesitate.

The initial thought in my head as the water hit my toes was “oh f***!” but I pushed on. As I got deeper, I began to feel the tingling in my legs. As soon as the water hit my lower back, I knew I wasn’t making it in much further. We formed a circle in the water holding hands while screaming, yelping, and yes a little cursing took place too. Everyone laughed, clapped, and then broke apart. Some people swam. Some had floaty toys. But everyone had fun.

After what felt like 5 minutes, but was closer to 20 seconds, Pat turned to me and said “I think I’m good to get out.” I insisted that we could not be the first ones to get out of the water, so we waited another excruciatingly long 10 seconds until we saw someone else leaving. Pat yelled “he’s leaving,” and at that moment we both ran as fast as we could to get out of the water. We looked around frantically for Lisi who had our towels. We practically tackled her as we eagerly ran up the beach. We began to dry off, and I literally could not feel my legs. It was a sensation I almost can’t put into words. It was as if my leg had been amputated. There was nothing there. It was completely and totally numb. The feeling returned to my legs slowly as we watched the others splashing about.

I’m not sure what made me want to run into the Atlantic Ocean when it’s only 38 degrees outside. Maybe it was for the rush, or maybe it was because it makes a great story. Regardless of why, I’m glad I did it. Swimming with the Coney Island Polar Bear Club is the most fun that I’d never want to have again.