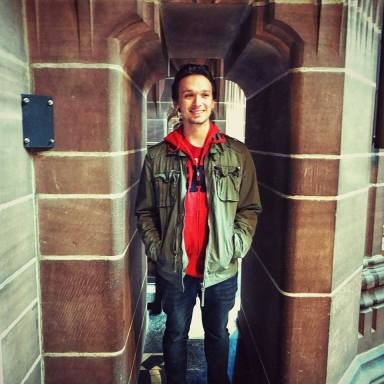 The pain was by far not the worst part. Friends, sports, food; just a few things from the endless list of things I had to give up on living with chronic pain caused by an incurable disease. It never ceased to amaze me how little people know about Inflammatory Bowel Disease. It isn’t as pretty or easy to advertise as cancer or heart disease, and so people know far less about it. Yet there are more than 250,000 people affected by IBD in the UK alone. So I decided to share my story with you to shed some light on the matter.

In my particular case, I struggle the most in the mornings and evenings. Any time before 9 AM is a definite struggle; yet that’s the time the lectures start, so every day at university can be a battle.

Whenever I attended lectures, I tended to sit in pain unable to focus on what was being said. But that’s a small issue when compared with evenings. As alcohol increases my symptoms by tenfold, I soon lost interest in partying and going out. There is only so much you can take as the only sober person at the party. As you can imagine the impact this has on my life is huge. I can no longer count how many parties, nights out and birthday outings I’ve missed because of my illness. This leads to even more countless nights spent alone sat in my bed watching Netflix. A lot of people tell me to toughen up, take some pills and enjoy being young. But it’s not so easy when painkillers make the pain worse, instead of better and every step you take hurts as if you’re walking on glass.

Food is even worse. Weirdly you can get used to abstinence from alcohol; it’s much harder to resist the temptation of eating on daily bases. I walk by fast food restaurants every day and every day I fight the urge to buy something on the go. I can’t drink anything with caffeine in it; no energy drinks, no coffee, even tea is a struggle. Raw veg and fruit are also a no. No dairy or eggs either. I think you can start to get the picture of what I deal with on daily bases. Going out and partying with friends is not an option but neither is catching up over food and coffee. On good days when my pain was not severe, I could catch up with my friends, but it normally still meant watching them eat and drink; a sight you get more irritated with as the time goes by. However is it a small sacrifice when I think about the times I spent in my bed, with severe abdominal cramping and bloating caused by food I just can’t handle.

The most irritating part of it all was the inability to do things. For every good day I got three bad ones. And the symptoms came and went, I could feel fine and happy and a few minutes later I would like my stomach will burst. And that makes commitment to things hard. Clubs, societies, sport, almost all of them require commitment and regular attendance. When I realized how quickly I was falling behind on my friends playing Volleyball I quit the club in rage and anger. It was more emotional than rational but it’s something that’s very difficult to control. Staying in shape is even harder. Although exercise can be beneficial, there are just days when you can’t do it. And when you miss a day of your training program, it takes some real determination to keep going and not fall into a downward spiral of failure.

My last relationship ended when my girlfriend told me I didn’t spend enough time with her.

What you have to understand is that for many people with chronic illness, tiredness becomes an integral part of life. I can sleep for up to 12 hours a day and still be as tired as I used to be after a football match. I can wake up with aches and pain which progressively gets worse throughout the day. It’s difficult to maintain a healthy relationship with someone when half of the time you’re physically unable to attend their needs (and yes, that includes sex).

As a result, you tend to shy away from people, because you can see the inevitable failure of the relationship. Friendships can be even harder. Out my age (hitting the early 20s), relationships tend to come and go but lifetime friendships are built. The problem is, not many people are willing to put with it. My friends don’t tend to see me as often as they see one another. I often find that when we do meet up I don’t always catch on or get their references as I just wasn’t there when the things were happened. And the worst thing; I understand how frustrating it must be. I often ask myself if I wasn’t ill if I’d be able to do it. To be there for someone who can’t always be there for you. And I also know no matter how many times I explain my illness to my friends there are still days when it’s just not enough. It only takes one missed birthday or a night out too many to tip the scales and cause the mother of all arguments.

Ever since I began a treatment for my Crohn’s, my life has improved greatly. My symptoms are far less frequent and significantly less severe than they ever used to be. But the greatest support came from my true friends. Without them, I could have never gotten through this illness. Although I will never be fully healthy, knowing that they are there for me makes me want to live once again. I hope my story has shed some light on what it’s like to live with IBD.