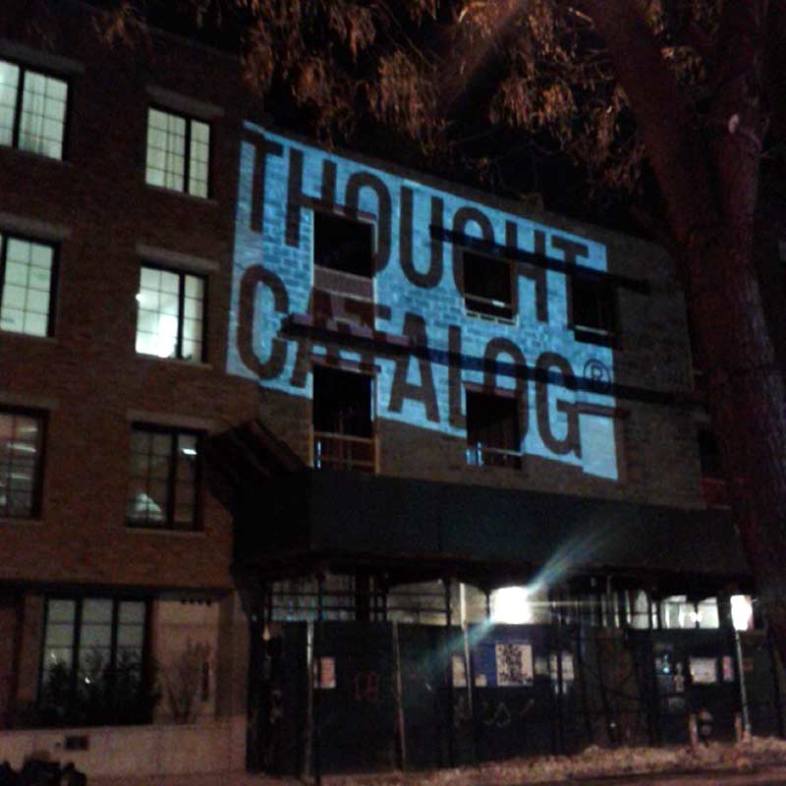 This past Saturday saw Thought Catalog’s Fifth Anniversary party here in beautiful scenic Brooklyn. Sure the air was filled with smoke from a local fire that night, and it was literally freezing, and no doubt other primordial attacks were imminent. But still a busful of us brave souls defied the elements and made our way to the W Loft. Chris Lavergne—this website’s cofounder—liked my idea that site contributors write up their impressions of the event. So here is a catalog of my thoughts, in order, as the night went on:

The venue was a loft with ceiling-to-floor glass walls, with Million Dollar Listing views of the Manhattan skyline. It felt like a Gossip Girl (RIP) party. It didn’t hurt matters that the wait staff looked like they were out of central casting, and it further didn’t hurt matters that they were all very friendly and personable. Well, I guess someone has to be the villain. (It’s the part I was born to play!)

I’d been to enough parties like this one where I was trapped in a conversation with people I didn’t really hate but didn’t really need to converse with either. To my surprise I ran into two old friends who I hadn’t seen in years: Rachel Kramer Bussel and A. J. Daulerio. All three of us came onto the scene when blogging first became a thing (yes, there was a time where it was innovative and not everyone was doing it). There’s something wonderful about passing by old friends and seeing that they’re thriving. It makes you think there’s some justice in the world.

3) “This new pomade is really the business.”

I got in new product from a Japanese company and hadn’t tried it before. A bathroom break revealed that my hair appeared slightly tousled but was in fact utterly immobile. I realized that this is one of the goals of Hugh Grant’s character in About a Boy, which made me fear that I will die alone, but then I realized that he found someone by the end of the movie. Existential crisis averted; now back to the party.

There’s one at every party: a mystery woman who you simply must talk to but never end up doing so, like Charlie Brown’s little redheaded girl. This one was wearing a print that looked like vintage wallpaper, which sounds awful but really worked. In my view (AKA the holy scriptures) she was the best-dressed one there. Sadly there was a shaved-sides haircut guy with her so I was content to admire from afar.

5) “Live music can actually be enjoyable.”

Watching live music has basically become my idea of awful. The volume, the crowds, the imprecision—and I’m paying for this? So when Astr cleared a space and began to perform I cringed on the inside. I not only didn’t hate it but they sounded tight, unlike so much of that Williamsburg art-dreck.

6) “I am completely out of touch with mainstream music.”

My friend identified that one of Astr’s songs was a cover, but neither of us realized that it was a cover of a Drake song. That’s when I realized I literally can’t name a single Drake song but I have seen every single episode of Degrassi (including the original 1980s series), where he got his start. This does not mark me as a hipster so much as someone completely out of it. But also a hipster. I do also have the DVDs of the Kids of Degrassi Street—you’ve probably never heard of it. 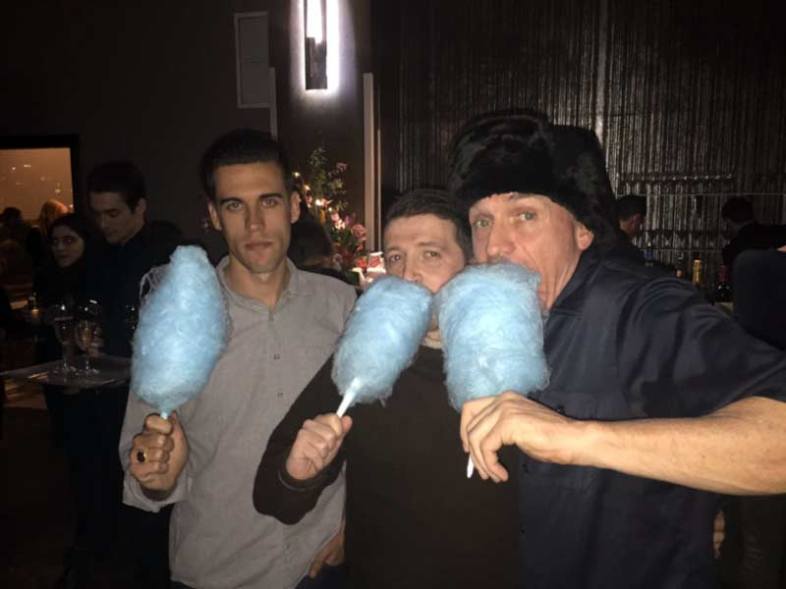 7) “I have to get a goofy Axis of Evil picture with Ryan Holiday and Jim Goad.”

8) “I wonder if cotton candy and champagne go well together.”

You know how you watch Top Chef and you think that it’s not that hard, that you can just add, I dunno, pomegranates to steak and all of a sudden you’re basically Julia Child? Anyone can do it! How clever it would be, I decided, to mix champagne—the symbol of wealth and opulence—with cotton candy—the food of the fair? It’s food art! Except it’s not, it’s terrible and puerile. Knives packed, away I go.

Am I in Inception yet?

10) “This is probably the first media party I’ve been to without posturing.”

Everyone seemed to be having a nice, relaxed time. There was no looking over shoulders, none of that frequent New York City event awfulness where the room seems to imagine it’s in the middle of some hierarchy. I didn’t have any perfunctory small talk all night, no one was sizing each other up. That was a relief.

Yes, self-critical mind, I do remember! I had graduated college and was too smart for my own good, and the thought of working a room sounded horrible, douchey but necessary. I both wanted desperately to know how to do it and to be the kind of person who never has to. In my day we didn’t have Thought Catalog; we had to figure these things out on our own. Fortunately I have, so I’ll be glad to write about that soon.

Some Thoughts I Had While Coming Down From Shrooms