1. Battery Park City was developed using over 3 million cubic yards of unearthed soil and rock from the construction of the World Trade Center and other major developments from around the city. This resulted in an additional 92-acres of land on the southwestern point of Manhattan. As of 2010, 13,386 were recorded as being residents of Battery Park City.

2. Union Square is actually named for the “union of the two principal thoroughfares of the island,” which are 14th Street, Broadway, Park Avenue South, and Fourth Avenue.

3. Theaters in New York City were located along the Bowery up to 14th Street (this was before the Civil War). Today, most theaters have relocated to the Theater District up around W40th to W54th Street on Broadway.

4. Gramercy Park isn’t shortened for “Grant Mercy.” It’s rather the anglicization of “Crommerserie,” which is derived from the Dutch word “Krom Moerasje,” meaning “crooked little swamp.” So there you have it. Gramercy used to be a swamp.

5. The former Fulton Fish Market (since relocated to Hunts Point in 2005) used to be associated with some New York Mafia families. In 1987, federal prosecutors sought federally appointed supervisors to minimize influence from the crime families and to eliminate racketeering.

6. SoHo might have never existed if Robert Moses got his way. He planned to construct parts of the Lower Manhattan Expressway over the neighborhood, but its residents eventually won out (thank you Jane Jacobs).

7. The original Pennsylvania Station was constructed in 1910. It was torn down in 1963 and replaced with the eyesore we know today, a place where both people and pigeons go to get lost underground. Comparing the old Penn Station to the new, Vincent Scully, a Yale architectural historian wrote, “One entered the city like a god; one scuttles in now like a rat.”

8. In 1904, there was a tragic fire on a passenger steamboat called the General Slocum carrying members of St. Mark’s Evangelical Lutheran Church. This disaster ended with the death of 1,021 of the 1,342 people on board. It is generally accepted that the fire started around 9:30 AM. It was first witnessed at 10:00 AM, to which a 12-year-old boy tried to notify the captain. Unfortunately, the boy was not believed, until 10 minutes later, which meant the fire had been burning for a full 40 minutes before any action was taken. Many of the passengers wore wool clothing, which meant that they would weigh them down in water. They did not know how to swim and the life preservers were said to have been useless “and fell apart in their hands.”

The captain of the ship, William H. Van Schaick decided not to ground the ship and instead traveled into headwinds, which prolonged the fire. Many passengers ended up drowning, due to the weight of their clothes in water, or mauled by the still-turning paddles of the boat, or when the boat itself collapsed. Many more perished in the fire, fueled by flammable paint and the winds. Captain Van Schaick was later found guilty on criminal negligence, for failing to maintain proper fire drills and fire extinguishers.

9. There is a mixed drink named after Loisaida. It consists of Olde English, apple cider, and a wedge of lime.

10. Murray Hill is named after an 18th-century Quaker family, which is far removed from the current residents of the neighborhood today. The Murray family, in fact, the mother, Mary Lindley Murray is said to have singlehandedly saved the American Revolution simply by delaying British officer William Howe and his army by two hours using only tea.

11. On July 13, 1863, an angry mob burned down an army recruitment office and the surrounding three blocks in Turtle Bay. Just five years later, in 1868, brownstones lined the streets.

12. Sugar Hill was named in the 1920s, because affluent African Americans described it as a “sweet place to live.”

13. When Manhattanville first came to be, its population was as diverse as it is today, albeit without British loyalists, American patriots, slave owners, Quaker anti-slavery activists, abolitionists, the poor, and the wealthy.

14. There used to be an institution for the mentally ill called the Bloomingdale Insane Asylum. The name Bloomingdale comes from the Dutch Bloemendaal, which was subsequently anglicized to Bloomingdale. The asylum was bought by Columbia University for the tune of $2,000,000 in 1892. According to ScoutingNY, there is only one building left standing from the old asylum and it is now called Buell Hall.

15. Tenement housing located around “San Juan Hill,” bordered by Amsterdam Avenue to the east, West End Avenue to the west, 59th Street to the south, and 65th Street to the north, was delayed in demolition for the filming of West Side Story. Gentrification and urban renewal led to the construction of Lincoln Center, which opened in 1962.

16. Inwood Hill Park is where the island’s only natural forest is left intact.

17. There are eight homeless shelters, three privately operated methadone clinics, 37 drug and alcohol treatment facilities and 37 mental health facilities in East Harlem, the highest concentration of any community on the island of Manhattan. The neighborhood is roughly 2.4 square miles, or 1,520.2 acres, which means there is one facility for every 40 acres, or one shelter for every 190 acres.

As of today, East Harlem is a rapidly gentrifying neighborhood — where there were once empty lots, now stand luxury condos and co-ops.

18. The Boston Post Road (a road used to deliver mail, which ended up becoming the first ever major highway in the USA) used to run through Manhattan until it was abandoned sometime between 1839 and 1844.

According to Wikipedia, these were the following post markers found in Manhattan: 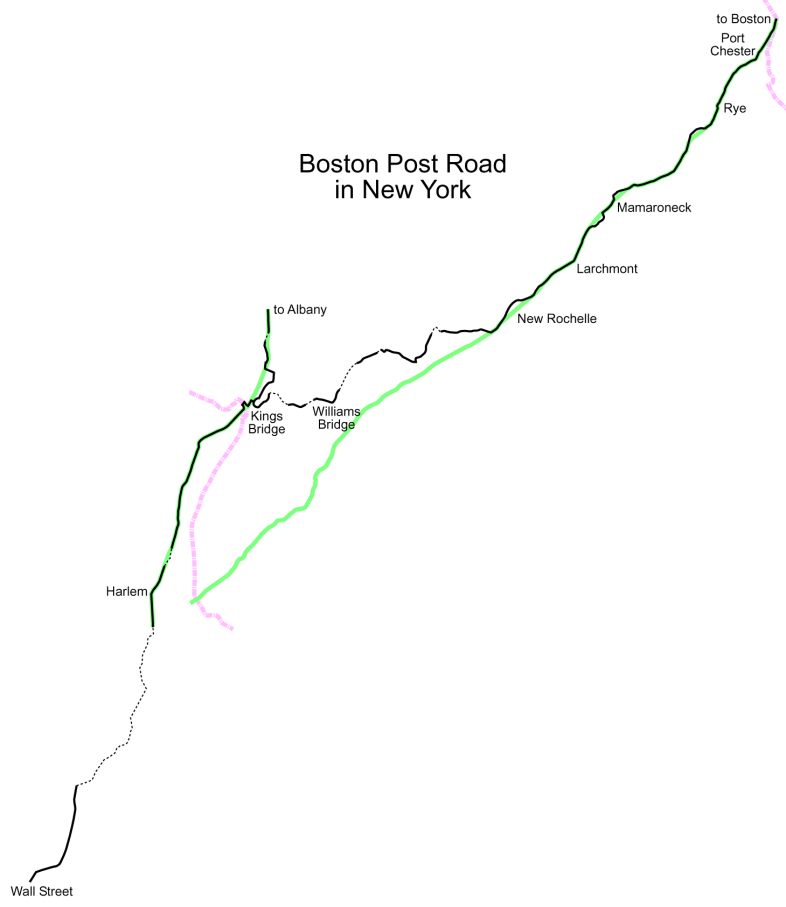 19. In 1857, Hamilton Square (a never-materialized park, of which CUNY Hunter now stands on) was the site of a demonstration to call for the secession of of the city of Manhattan from the state of New York.