I had a dog for about two months until the landlady found out and I had to lie about “taking care of him for a friend.” Odie, as I came to name him, was then given away to my mom’s friends. I cried when they drove off. Odie was crying when I placed him into the lady’s arms. It was as if he knew what was going on.

We got him when my aunt’s fat dog, Sarang-ee got pregnant and had a litter. My mom asked me and Jason (my brother), if we wanted a dog. Of course we said yes. What kid wouldn’t? I remember us driving to Queens and picking up the puppy. We debated on his name. He was part beagle and part…terrier, or something like that. Jason and I settled on Odie, after the dog from the Garfield comic strip.

The poor thing threw up when we traveled back up to Westchester. His poor little body threw up the milk that he had from his mom, covering him in it. When we got home, Jason and I ran to the bathroom and quickly washed the throw up off of Odie and dried him off as carefully as we could.

We made a makeshift doggie bed using a small cardboard box. I placed an old pillow on the bottom and grabbed an old fleece and placed it above the pillow. I wanted Odie to be as comfortable as possible. Jason and I watched him sniff his bed and he settled in the middle, closed his eyes and fell into a deep sleep. Jason asked me what we were going to feed it. I had no idea. We used Yahoo! Answers and people recommended that we give Odie some greek yogurt, but not before calling us “fucking retards” for taking the puppy away from its mother.

Odie grew very attached to me. He would follow me around the apartment and howl when I left him alone. He loved to chase after tennis balls, which he could not get his jaws around, and he loved tummy rubs.

I brought Odie out to socialize him with dogs and people. When he stepped foot outside, he promptly pissed on the sidewalk and tucked his tail between his legs. He was scared to be outside. I picked him up and walked towards Main Street and placed him on the sidewalk, where he whimpered while looking at me. A girl shrieked and ran over, and Odie pissed himself again. A man saw Odie and he said to me, “That dog is a chick magnet.” The man was actually arrested for possession of child pornography a couple of years ago.

I picked up Odie again and walked up to the elementary school. Next to the open parking lot was a dirt path called the Aqueduct. I let Odie explore the path (leashed, of course), but he looked uncomfortable. I tried jogging with him, but his little legs would trip over the leash and he kept stopping to scratch his collar off.

My mom and Jason tried to give Odie a bath that day. He ended up snarling at them when they tried to dry him off. I stepped in and he calmed down.

As he grew, he came to be petulant and quite gluttonous. We’d give him a good-sized portion, but he would always ask for more and watched us with his beady eyes when we put the dog food away. I know he would’ve figured out a way to get to the dog food if he had more time. Then the humping started. He would hump your leg if you gave him a chance. His little body would thrust his front legs would wrap (or try to) around your shin and try to go to town. I must’ve frustrated him a lot because he persistently tried to mount my legs.

One day, when I took him out for a walk, I noticed that someone was watching me from across the street. Ah, it was the landlady’s brother. Silently cursing myself, I waved hello and quickly walked away from him.

That night, we got a phone call from the landlady. She sounded almost…surprised that we had a dog. “You guys are just dogsitting, right?” she asked. “Yes, yes we’re only watching him for another week,” I said, lying through my teeth. I remember glancing over at Odie. He was next to me, pawing at my leg.

I told my mom and she sighed. “It was only a matter of time,” she said. And she started making phone calls.

I messaged a girl whom I was involved with at that time and I told her that my dog was going to be taken away. I felt a deep sense of loss, as if a child was being taken away from me. 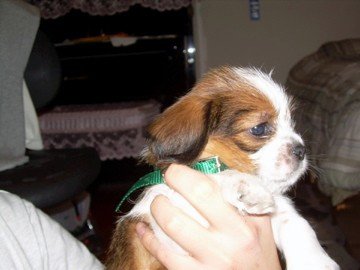 I remember the night when my mom told me to get dressed. I remember my stomach dropping and my heart feeling heavy. I picked up Odie, who began to lick my face. “Goodbye,” I said, nuzzling his furry head. He continued to lick my face as I stepped out into the dark, where a party of five stood waiting for Odie.

“What a beautiful dog,” one of the ladies said to me. “His name is Odie,” I said. “Odie,” she said, rolling his name around on her tongue. I placed Odie in her arms, but Odie squirmed and whimpered. I scratched behind his ear. “This is goodbye,” I said, turned around and walked to my porch. My mom bid them goodnight while I watched them from afar. I saw Odie looking out the window, looking for me. I felt tears well up in my eyes and heard his muffled barking. I couldn’t hear him barking anymore when the car rounded a corner, disappearing along with the red glow of the brake lights.