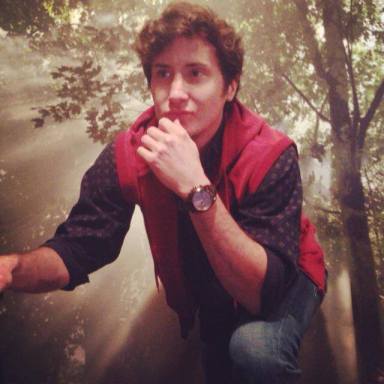 My mother, who’s 65 years of age and technologically obstinate, has never quite understood the concept of meeting lovers online. It’s understandable that someone from her time who can hardly operate a microwave would view online dating as bizarre and threatening. Her only exposure to the idea has come from the Dr. Phil show; therefore she thinks any potential soulmate you speak to on the internet is either a murderer or some guy in India attempting to scam you out of money.

Little does mom know, I’ve met several women through dating sites. For the most part all of these meetings went well. Some progressed beyond a date. Others were a one-time thing because the girls were either substance abusers or shocked by the fact that I’m a skinny, weird ass son of a bitch. Regardless, dating apps provided me with wonderful opportunities.

Before the online dating scene came about, or at least before it was present in my life, I was making friends online. No, not strangers in AOL chat rooms. I was not “cybering” with guys named Steve with the exception of that one guy named Steve who I cybered with.

At age 15 I began posting videos to Youtube. I thoroughly immersed myself in the community that Youtube once was. In the site’s early days (2007-2009) there were a lot of people like me, both young and old, who simply wanted to put their voice or work out there for the world to see. We, the original Youtubers, were very different yet so much alike. We all lived divergent lives in various regions. We had our own individual hobbies. We even had our own motivations for being on Youtube. However, what united us all was the simple fact that we loved uploading videos.

Some folks turned to Youtube as an outlet to be heard because they didn’t have many IRL friends (IRL means “in real life” for the people who probably have more sex than me.) I myself felt I had some comedic value to offer the world. Also, I desperately craved attention. Being the class clown from elementary through high school wasn’t enough regard for me, I suppose. I didn’t expect to build a devout fanbase, and I certainly didn’t expect to chat with and befriend others. Although that’s exactly what ensued.

Just a couple years into my Youtube “career” and I had a group of pals who I spoke with daily. The crew and I would meet in group chat rooms, speak via video blogs, and even text. These somewhat mysterious comrades of mine were growing closer to me than any friends I actually saw in person on a daily basis. Kids from my school or neighborhood who knew me personally may have thought of this as weird. Believe me, I was at a point where being called “weird” or a “weirdo” no longer bothered me. I embraced these online friendships despite how others felt.

Years down the line it’s the same story. I’m still in contact with many of my former Youtube buddies. Some are Facebook friends of mine. Others follow me on Twitter. Hell, some even text me from time to time. We all chose different paths in life, but fond memories of the Golden Youtubing days will forever reunite us.

When I originally created this online persona of mine I truly did have a lot of friends in real life. I wasn’t like the social outcasts who turned to Youtube for a place to escape reality’s reclusion. I was more of a social butterfly. Today it’s almost the polar opposite. My social life is comparable to that of the average Hot Topic shopper. Of course, even goth kids have someone to shop with. Guys in eyeliner who talk about blood probably get out more than me. I’m perfectly okay with this.

Why am I content with having very few close friends in real life? It took me until age 23 to realize something very important about me, my life, and the people in it. The folks I’ve met through the internet genuinely care for me. They care for me more deeply than anyone I’ve considered a real life pal ever has.

I’m currently quite active on the Vine app. Admittedly, I have a plethora of negative things to say about the network. It’s ridden with no-talent narcissists whose “comedy” is slowly but surely killing actual comedy. But there are a ton of great, talented, and interesting people on there as well. In its own way Vine has provided me the same opening that Youtube once did. It’s essentially the identical tale: Through Vine I’ve chatted with and befriended some marvelous people. They’re all very different than me, yet they’re doing exactly what I’m doing. The main difference between my Youtube friendships and my Vine friendships is the age at which I formed them. I’m old enough now to sincerely value these bonds, conversations, and mutual affinities.

It took a slight mental breakdown for me to figure out how special all of this is. Just a few days ago I was facing severe anxiety and stress (per usual.) I was contemplating the trail of life I’ve chosen to strut skeptically on. I was driving myself nuts, rethinking all of the online decisions I’ve made over the years. Overall, just wondering if posting content throughout the years was even worth it. Being the deluded whackjob I am, I took to Facebook and Youtube in order to declare my perturbation.

Shortly after publicizing my uneasiness, a few great people reached out to me. You know who didn’t express concern or attempt to contact me? Literally everyone I know personally on a face-to-face level. Nobody from my university. Nobody from my former university. Nobody from high school. None of the dirtballs who grew up on my street. Despite this, numerous chums from THE INTERNET took time out of their nights to speak with me and lift my spirit. I received calls and messages – all from Vine friends, Twitter homies, and former Youtube buddies.

The way in which I describe this makes me seem to be a needy pussy. Calling me that wouldn’t be completely inaccurate. Don’t let my feeble nature distract you from the main message, however. I want others to understand how incredible online bonds can be. Many people, like the ones I used to call my best friends, would turn a cheek to the notion of forming a friendship through an app or social network. That’s perfectly fine. Some people don’t need that channel.

I spoke of dating apps earlier, and they too can be an avenue to form new companionships. Sure, their key intention is to help singles find a mate or a quick pork, but who says you can’t form a friendship through dating apps? One never really knows until they enter the online networking world with an open and unperverted mind.

The internet changed my life (understatement of the year.) It gave me the ability to have a voice and generate a few laughs. Much more importantly, it opened a whole new window of personal connection. Without it I never would have formed bonds with such remarkable, caring people. Surely it can do the same for you. Maybe you don’t need it. For me at this point and time it’s just about all I’ve got.