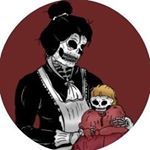 When I moved into Hollow Oak last year, I knew it was meant to be. The community was small and peaceful, most of the neighbors were very welcoming, and the houses were absolutely beautiful.

I had just gotten out of a terrible relationship that was headed nowhere from the very beginning, and decided I needed a fresh place to start over. I was right. The day I unpacked was the best day of my life. I was free to finally be my own person again without the deadweight of broken promises holding me down.

The first night in my new home was jovial as I set up my bedroom the way I wanted. My own private space of peace away from the busy world. Once my bed was made and my string of salt lanterns were hung above the bookshelf, I nestled in to the soft glow that illuminated my sanctuary.

I sighed as my head gently hit the pillow, ready for sleep to blanket my tired soul, when I saw a light turn on just outside of my window. I blinked in that direction and noticed the small glow practically mimicked me. Taunting me to come over and look.

I groaned as I sat up and made my way over to the window. Peeking through the blinds I noticed the neighbors’ porch light was flickering on and off, almost like one of those bug zappers. I pulled the curtains closed and shuffled back to my bed, thinking I would buy them a new lightbulb the next day as a neighborly gesture.

Now, I don’t really remember the dreams I had that night, but the sweat that covered my entire body assured me that they couldn’t have been good, and they never did get better. Each morning from that first day I would always wake up the same: tired and sweaty, with echoes of terrified screams trapped inside my mind.

I do remember the day I brought the lightbulb over to my new neighbors though. Given the stepford appearance of Hollow Oak, I assumed their porch lamp was similar to my own. I was very wrong.

Carrying over a plate of cookies with the bulb gently wrapped in tissue paper, I gave their door a soft knock.

I tried to knock one more time and the second my knuckles hit their mahogany door, it flew open with a very angry looking man waiting for me on the other side.

His soulless eyes gave me a once over before he spit out, “What the fuck do you want?”

That’s all I remember getting out before he slammed the door in my face. I can tell you right now that I never did go back to that house and honestly, I regret that the most.

Every night for almost a year his porch lamp would slip in through my window and lull me to sleep. Its rhythm was calming and I had grown used to the fluorescent glow.

It wasn’t until he moved away last week that I realized just how sinister that light had really been. I’ll never know if the screams I heard for the past year were real, the house was stripped down to bare bones by the time I called the police.

What I do know is, that beautiful rhythm I had grown to love…

Your nightmares are my dreams