One of my biggest fears in life is looking stupid. My other fears are saying stupid things and actually being stupid (the first of which can be avoided by hitting “mute” on myself and losing the remote. The second one is more existential).

I also have a monumental fear of heights and a terrible pun habit, but that’s another story.

Fear, that unworthy friend, had been navigating life for me. I had been taking instructions from a phobia, which is likely even more confused about cardinal directions than I am. Too many moments were squandered feigning nonchalance, hiding in janitors’ closets, or “forgetting” to speak up. So many self-help books were perused that I probably earned an honorary degree in Procrastination with a minor in Weeping, and my face was turning into beef jerky from all the tears.

So I took a stab at exposure therapy, in which, loosely interpreted, you confront your fear until it doesn’t make you black out anymore. My goal was to purposeful look ridiculous, brace for negative reactions, and let those reactions slide the way ketchup never does from a Heinz bottle.

Lesson One: Most People Don’t Care 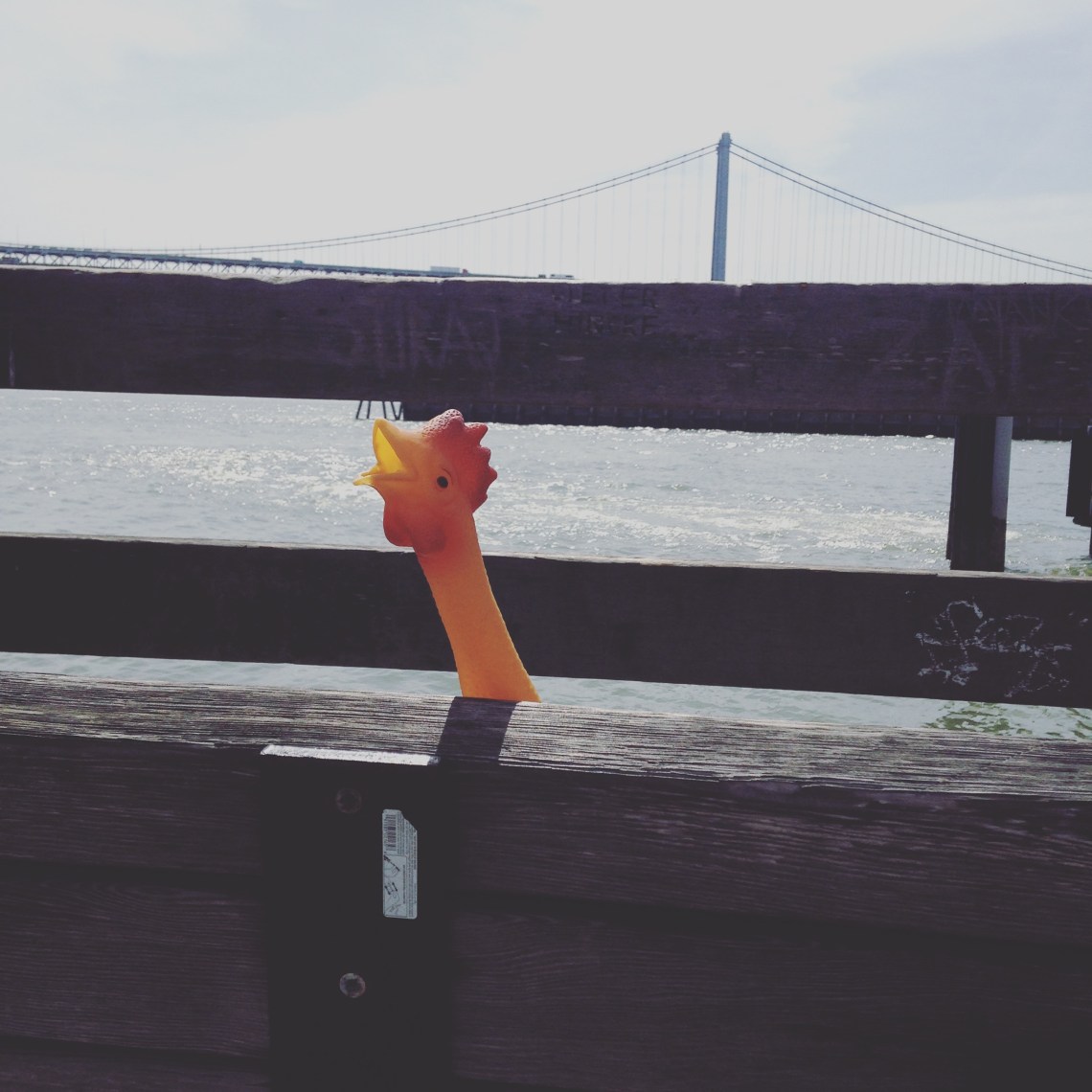 Kids acknowledge the absurdity of the chicken, but most adults will either adamantly convince themselves that the chicken is not there or not pay attention in the first place. The first time I took Roger out in public, the Stanford professor who sat across from me on the Caltrain raised his eyebrows but said nothing. The man who later sat next to him also said nothing, though he kept peering at me.

The staff at Thorough Bread and Bakery didn’t do anything when I propped Roger across from me at our table. The servers at Burma Love walked right by when I positioned the Thai tea under Roger’s beak. Most adults probably didn’t want to clip my wings, or think I’m cuckoo and want to stay far, far away. Case in point: at the Ferry Building’s farmer’s market, one lady did exclaim, “Oh, a rubber chicken!” She chuckled when I positioned him on a wooden bench for his obligatory Bay Bridge tourist photo. I deadpanned, “Yes, his name is Roger,” and proceeded with the photoshoot. She chuckled again, somewhat nervously this time, then, after a pregnant pause, turned to her friend and said, “Well, shall we?”

Lesson Two: Some People Will Be Mean To You 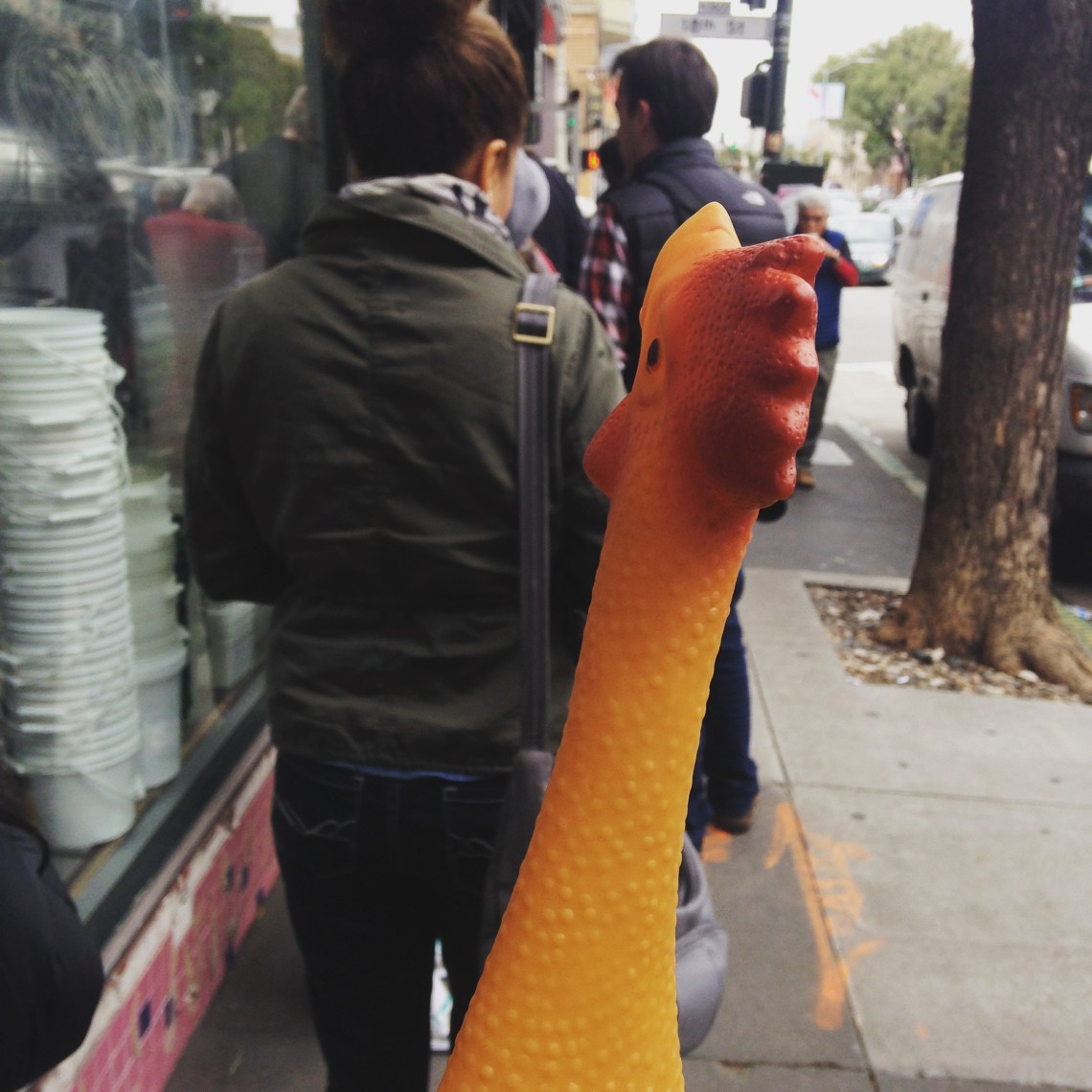 People at the Caltrain are the most vocal when it comes to inanimate poultry. One guy, while passing by me in a crosswalk, exclaimed, “What the fuck?!” (You mean “What the duck?”) Another guy, jogging around me out of the station, said, “Hi ugly girl.” (Again, “ugly duckling” would have been funnier.) There was also a time when I took Roger to the Banks concert at The Warfield and the bouncer, confused about why I brought Roger, wrung his neck. (Duck you, bouncer. You’re a booby. Go suck an egg.)

Lesson Three: Some People Will Be Delighted To Engage 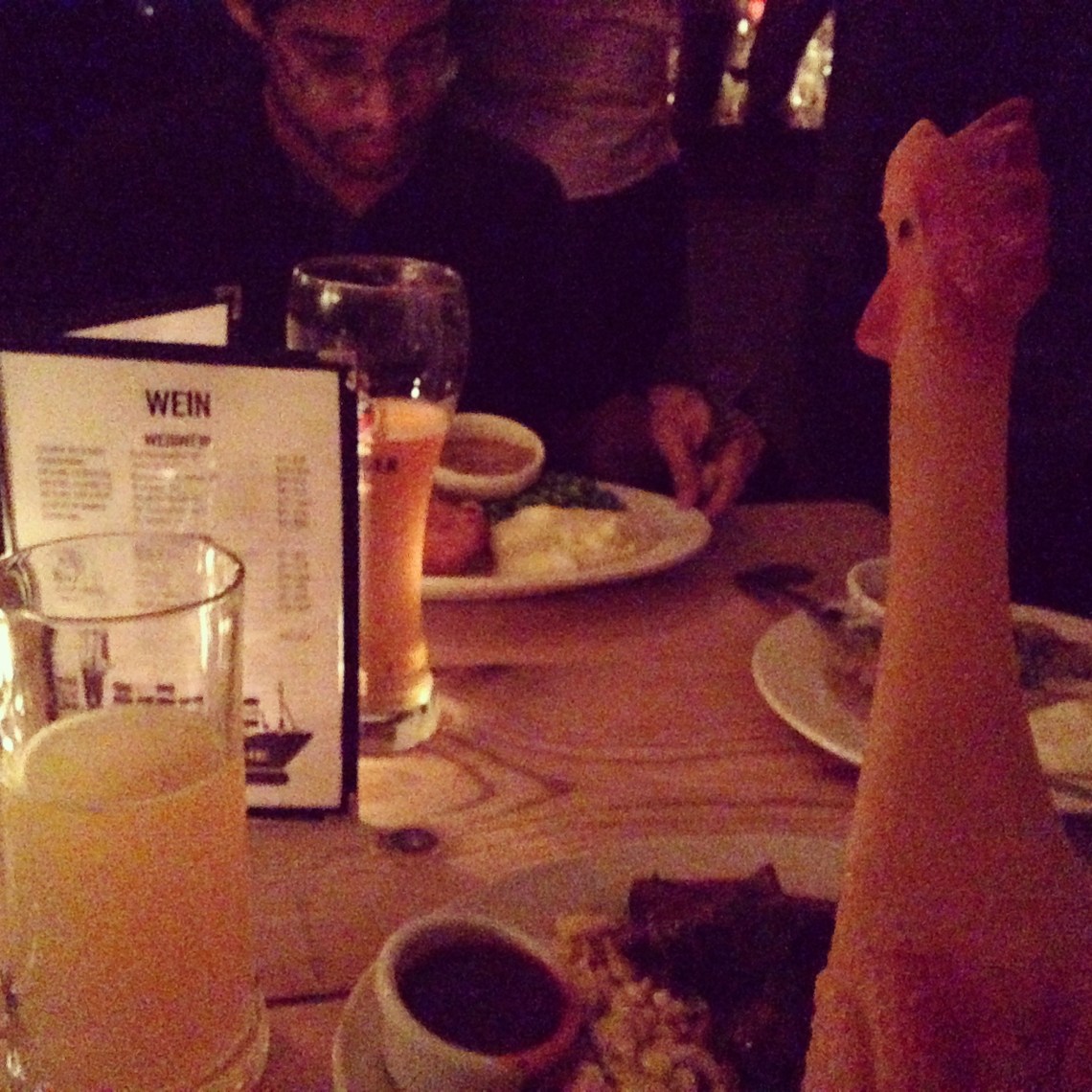 For those who know me, there was also a very Melody-esque moment one day when I was carrying Roger on a day I had an improv drop-in class. The class went out for drinks and I didn’t feel like explaining why Roger was there, so I tucked him in my armpits underneath my overcoat, literally taking him under my wing. I retrieved my pucker-worthy Berlinerweisse from the bartender then rejoined the circle that had formed in the meantime. When I took a sip, Roger flew from my pits and bounced into the middle of the circle.

Everyone looked down. Crickets. Then one classmate chirped, “Did that chicken just emerge from you?” Um, well. Yes.

She also asked if I knew about the concept of “peacocking”—for my non-pickup artist friends, “peacocking” is a technique for starting conversations with strangers. You wear or carry an extremely eccentric accessory that others can use as a talking point when approaching you. That, frankly, was not my intention, but I did realize that I was “cocking”, pun fully intended.

And a good conversation starter Roger does indeed make. In fact, a Stanford sports coach popped into my UberPOOL, commented, “I won’t ask about the rubber chicken,” proceeded to do exactly what he said he wouldn’t, recounted that an ex-girlfriend had also dabbled in flying trapeze, then asked about commissioning me to make a map for him for his brother’s wedding.

Lesson Four: If You’re Scared To Do Something, You’ve Got To Do It 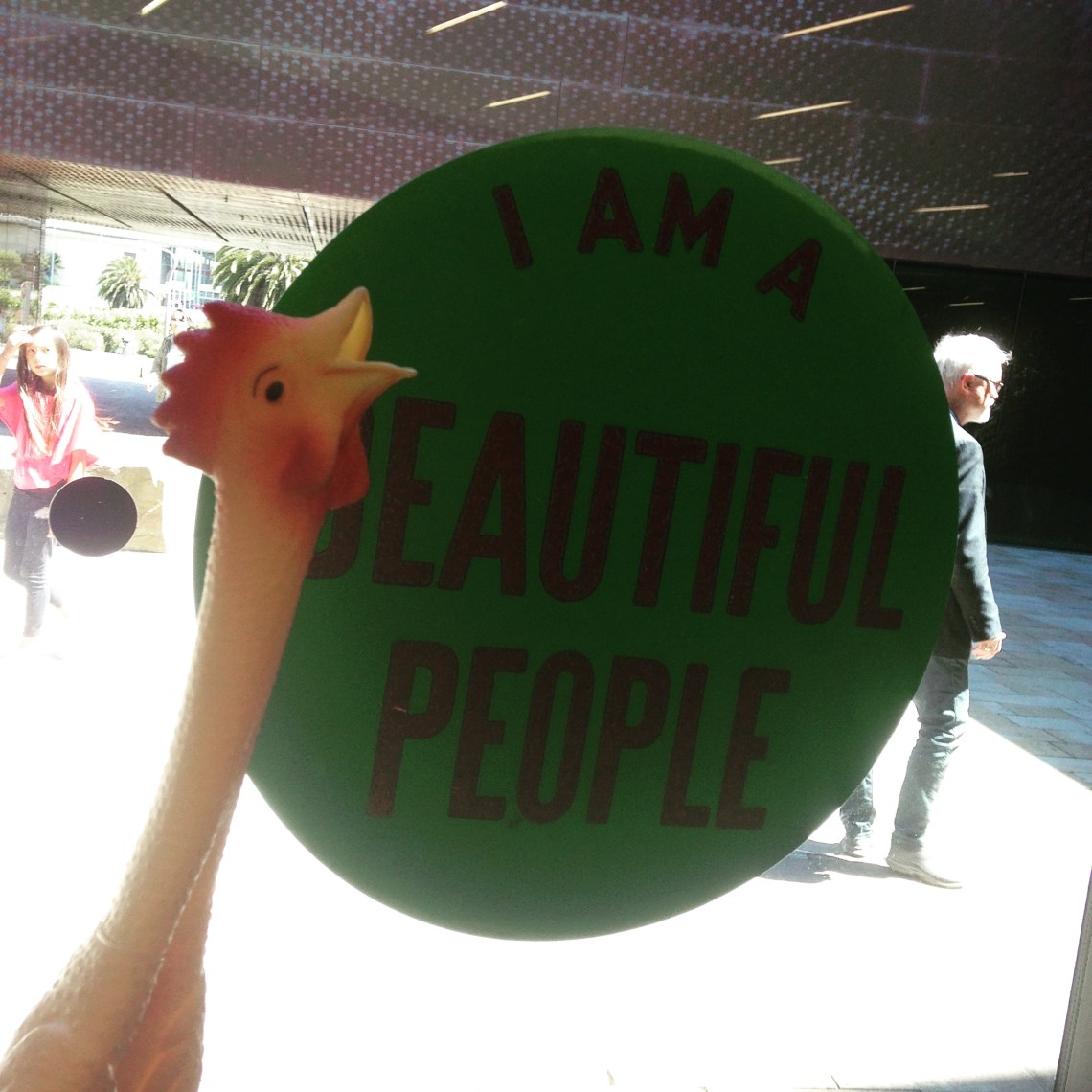 Ultimately, I had a ball. I cracked myself up when I saw my reflection—an offensively normal-looking girl with a very stiff, very unalive caricature of a chicken in tow. Some people deem me insane, some people salute me, but at the end of the day, what strangers think of me is really none of my business.

I was also sometimes painfully honest about the premise of lugging the chicken around, and others surprised me with their vulnerability matching. One girl talked about how she was contemplating voice lessons because she felt her voice was too deep. She said it was hurting her career because her voice couldn’t resonate due to its lowness.

Someone else confessed that she obsessed over drinking enough water because she had a huge phobia of being constipated.

And of course, the verdict: am I still scared of looking stupid? Certainly. If I wove my life around a certain type of thinking for 23 years, I cannot unravel everything with merely a month of company from a feathered friend. But is the anxiety as bad as before? Definitely not. I’ve never been as fearless about badgering people to hang out with me. I also don’t mind eating alone in a restaurant anymore, as it’s actually less stressful eating alone than eating with a rubber chicken as your date.

Because we must remember that having courage doesn’t mean feeling no fear. It’s not about being bulletproof or perfect or getting it right the first time around, or even getting it at all the first time around. The definition of courage is “the ability to do something that frightens one”—to do, even when you’re really scared and want to nest in that janitor’s closet and be a chicken.

I Tried Meditating With A Horse And This Is What Happened