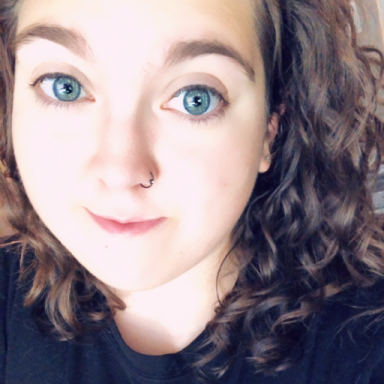 While I’m lucky enough to work in a school where there’s virtually no stigma over mental health, many educators are not. I still vividly remember being eighteen and the youngest member on the psych ward as another patient was crying in fear of her employer finding out where she was – or worse, her students’ parents. She was absolutely terrified of being fired due to the parent concern her illness may cause if others were to ever find out.

She was so terrified, that she almost scared me away from the field I’m most passionate about altogether because I’ve been in a psychiatric hospital over twenty times. I’ve been in long-term treatment centers twice. For four years, I was unable to hold a job and unable to attend school, because every time I did I ended up back in the hospital.

Here’s why I believe all of that makes me a better special educator and more qualified to teach my students every day.

1. I know how it feels to be incapable of using my own voice.

I remember being unable to advocate for myself because I didn’t know I was allowed to. Being terrified to ask simple questions, such as, “Can I go to the bathroom?” in fear of bothering the person I was talking to is a time in my life I wish I could forget. Self-advocacy is an essential skill in life, but also a surprisingly hard one to learn if you don’t already know how to do it. However, through my mental health journey, I’ve learned that it might be the most important skill you’ll need, so it’s something I try to enforce every day with each student I teach.

2. I remember how it feels to have everyone else making your decisions for you.

You’d be amazed at how little decisions you get to make if you’re viewed as mentally insane, and the same goes for having a disability. The kids I teach get so few choices in their lives, and I know firsthand how that can be beyond frustrating. I understand the power in letting my students choose if they want to sit in this chair or that one; if they want to do a task now or in one minute. Making choices gives my students a sense of control and independence. My own recovery taught me that.

3. I remember how it felt to be capable of doing something myself, yet others doing it for me – which eventually made me think I could no longer do it myself in the first place.

There’s a term called “learned helplessness”, which basically means the person feels they are helpless because that is what past experiences have taught them, and you’d be amazed how often that’s the case with my students. It seems like so many people assume my students can’t do something when they are perfectly capable of doing it on their own. Then, that leads to my students truly believing they can’t adequately do it on their own despite their ability level.

I remember how that felt, which is why I always assume competence. My past experience causes me to take nothing for granted, and I always want to empower my students by making them realize that they can do things, even when other people think they can’t. They are not as helpless as the world may sometimes make them seem. Doing things for themselves allows for a sense of pride and accomplishment, and my students deserve that. These kids are smarter than we all know.

4. I’ve experienced how it feels when a professional gives up on you.

After being committed time after time, it was clear that many treatment providers stopped believing in my ability to recover. I would get better, then regress, then end up back in the hospital, and because of that, it felt like my treatment providers began to lose hope. But because of that, every time I see that struggling student who seems to only be regressing, I know there’s a deeper reason. I know they don’t want to go backward, but rather that something’s going on that’s bigger than I know. Because of my experience, I have such huge compassion during those times that I might not otherwise have.

Because I do remember when that was me, and I do remember that what really would’ve helped me during those times was an understanding, trusted adult, standing beside me and still believing that I could do better – that I could still improve and grow, despite taking a few steps backward. Because a few steps backward are not the same as being back at square one – even if it seems like it sometimes. However, I know the importance of having an adult by your side who believes that too, and that’s the person I aspire to be every day.

So, while there is an apparent stigma in the teaching world about mental health, there shouldn’t be. Because we get it more than anyone, and believe it or not, mental illnesses really can make educators even better. I hope people start believing that.

If you decide to publish this story, it does not have to be anonymous and my name can go on it.

Educator by day; Writer by night.