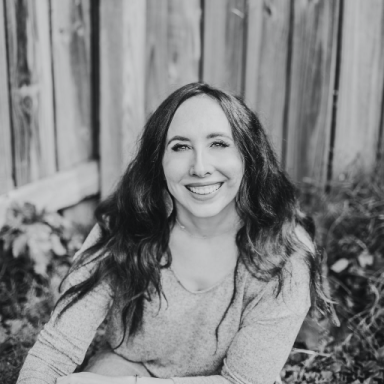 One Sunday afternoon at the end of last summer, my husband and I were sitting on the couch watching television when I got the distinct feeling we were being watched. I looked to my left to see a black cat with a tiny strip of white down its nose gazing back at me through the back door.

It narrowed its eyes at me as if it were inspecting me, sizing me up. We continued this stare down for a few moments before I got up to greet our new visitor. However, before I could even reach for the door handle, the tiny cat scampered off.

We didn’t see that cat again for several weeks, but when it finally reemerged, we realized it wasn’t alone. As it happens, our visitor was a new mom and had brought her two adorable kittens to say hello.

Now is probably a good time to tell you all that I am highly allergic to cats. But let me also tell you, cats do not care.

In hindsight, I think Mama Kitty was seeking out a safe place to have her kittens, a place she could call home. And apparently cats can spot an allergic softie from a mile away… or at least from six feet away through a glass door.

While we pondered what to do with these cats to make sure they could have the best life possible, we bought them some food and bowls and they began to feel comfortable enough with us to let us get close to them. We took them all to be vetted, spayed, neutered, and microchipped with the intention of getting them all adopted out.

Our sweet neighbors fell in love with one of the kittens, a gray and white chatty baby who is now named Socks. However, Mama and her other baby, a black wide-eyed curious boy with two tufts of white on his chest, remained.

At this point, Mama felt like the perfect name for the mother cat who was sweet, but also had no problem giving her kids (or our three dogs) a good swat when she wanted them to leave her the heck alone.

We decided to name the other cat Binx because Hocus Pocus is one of my favorite movies. And much like his fictional namesake, Binx was sweet, whimsical, and clever. Luckily, he didn’t appear to be a real boy trapped in a kitty body because of a 100-year-old curse. So that’s a relief.

We made them a two-story kitty condo. Then we started buying them special treats and somehow cat toys began to magically appear in our grocery carts. One afternoon, Binx and I were playing outside when my husband reminded me I was allergic and we couldn’t keep him. I scoffed and gave him the stink eye and he realized we were now cat owners, bringing our fur child count up to five.

Fall finally arrived, but with it came a difficult time for me.

My work was falling through, I was getting rejection letter after rejection letter, and I had to have hand surgery that left me in a lot of pain. But these cats kept me and my mind busy. They provided a much-needed distraction from everything happening in my life.

Granted, some of these distractions I could have done without. Have you ever tried to save the life of a baby chipmunk in your ugly pajamas with only one hand while wearing a face mask and without your glasses on? Because I have.

All while yelling at Mama to put the rodent down. Then suddenly I had a whole, very much alive, very frightened chipmunk in my only available hand, and I realized I did not think this through. Lord, I hope my neighbors don’t have security cameras out back.

My hand recovered, but other areas of my life did not bounce back as easily. Some mornings, I struggled to get out of bed. But I knew I had to because there were two kitties who insisted on only being fed first thing in the morning.

Being used to dog ownership and them generally being content to have dinner at the same time we do every day, I wasn’t used to these demanding little creatures. Also, my dogs are kind of lazy and would be thrilled to stay in bed for hours. The cats, on the other hand, would not be deterred. They needed their food and their affection on a very specific schedule. And Binx, who I am fairly certain is a dog in a cat suit, needed his belly rubs.

On the days where I struggled to just put one foot in front of the other, I gave myself one task to complete—feed the dang cats.

Some days I would curse to myself as the morning light poured into the house, wanting to pull the covers over my head. Just feed the dang cats, I told myself. But the next thing I knew, I was making breakfast in the kitchen with little Binx rubbing his face into my feet.

Why are cats like this? Someone please explain. Then I figured I was already up and moving, so why not send a few more pitches out to magazines or schedule more guests for my podcast? Those tasks gave way to more and more, and suddenly the darkness had lifted. Because of Mama and Binx, I was able to get out of my own head and get back to putting myself out there.

All this time I thought Mama and Binx needed us, but it turned out I was the one who needed them.

One afternoon, I took a break to enjoy a couple of nose boops and some love from my two favorite (and only) kitties. That is when it occurred to me that it was no mistake that Mama chose us. You see, God has a knack for giving us exactly what we need when we need it, even if we don’t know we need it.

At the end of the summer, God knew I was going to need help. He knew I needed a little refresher course on faith. He also knows I won’t ever turn a creature away, allergies or no allergies.

When Mama showed up, she didn’t know we would feed her or that she had found a home where she would be safe. She didn’t know that we would take care of her, but she took a chance and showed up anyways.

Faith is showing up in the unknown, even when it’s scary, and knowing somehow, someway, we will be provided with exactly what we need. Mama showed up with her babies and she trusted we would care for them. And I showed up for Mama and Binx every morning, trusting they would be there waiting for me. Every single day, they were waiting for me to show up for them and to show up for life.

Through the love of two cats I never asked for, I got everything I needed.