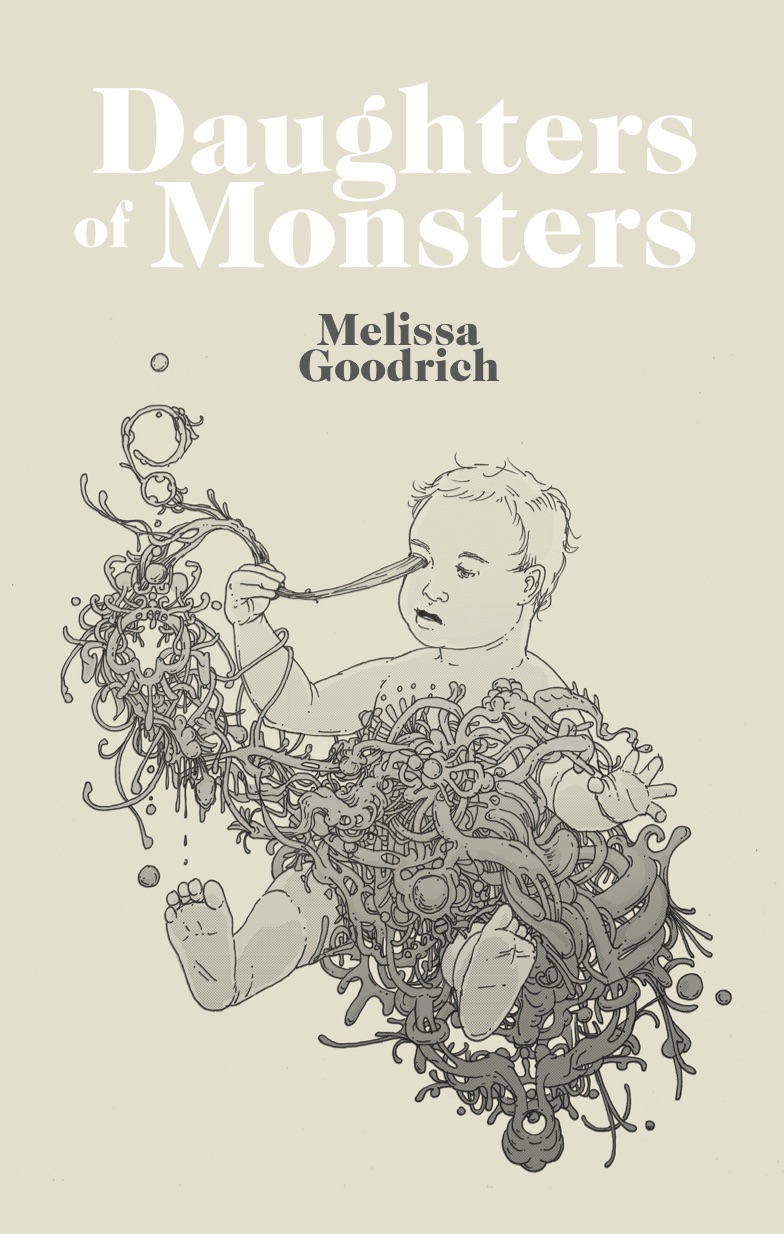 All over town people are finding baby animals in the snow. Or I suppose this is what I suspect when I see our neighbor Tadd running a giraffe’s neck out an upstairs window, chewing on a floral pillowcase. I see rhinoceros tracks through the snow, or a black bear with a thick collar leading a child on a sledge. It is keeping us all very busy. Iguanas appear in mailboxes. Tiny jade snakes, silky as dress ties, curl on a porch swing. All the animals are infants, quarter-versions of themselves: a tiny swam draped with bells, a keg-sized buffalo out the low window of a house, sucking snow from hedgerows.

The newspapers are full of it – stories, photographs – but we keep our ape to ourselves. His eyes were froze shut when we lifted him from a snowdrift, light as a paperback book. We moved instinctually towards the fire. We pulled our curtains close and peered carefully outside.

His arm’s bent backwards at the elbow. He’s been bleeding a little, the blood frozen to his coat. I make a nest with my coat, lay him by the fire. It crackles and two logs give like lovers. The snow on his toes starts to drip, turns to water.

Eric gives me a look, and I give Eric a look. Ours.

The wind ploughs backwards and forwards and sideways and downways in the yard. It’s snow-storming so hard it’s sandbagging us in, and we don’t know it yet how trapped we’ll be, we’re just slogging, just shoveling when there’s a pause midday and a light from the sky leaks out. A neighbor lifts a sloth’s claw from the snowy down of a bush. A white rabbit leaps through drifts. It’s all plushness for now. It is two nights till Christmas. Eric and I are forty years old. It’s religious-feeling, thinking like this.

An ape is in my arms.

All night I keep turning him like a rotisserie. First one side of the body, then the other.

Overnight, our ape grows. Twice as big seems like. He is large as a dictionary now, heavy as a vase filled with flowers.

I call him Anna.

I hold Anna to the mirror to show him himself, to check out the two of us as a couple. Then I steer us towards the window, feeling instructive. I badger his hand against the glass. I say, Snow. You see the snow?

His eyes are watchful. His fur is black and thick, his eyes ringed with wrinkles, and he hangs scarf-like from my neck. A good weight. I hook my arm under his legs and the thumbs of his toes grasp my shirt.

Is ape correct? Maybe gorilla? I wonder, and carry him to the den. Online I learn that yes. They are herbivores. They forage for food in the forests during the day. Leaves, fruit, seeds, tree bark, plant bulbs, tender plant shoots, and flowers. So I immediately think we have little of that. I pull a fistful of daisies from their vase, shake their stems free of water. I will hide these through the house. We will forage, Anna and I, together.

So I slip an orchid under the sofa. Leave a trail of houseplant leaves from the kitchen to the closet. Anna comes with this shyness, with these nostrils large like thumbs.

All night it snows and snows.

Anna grows huge. Anna grows balls the size of barbells. He scratches them on the ruined couch pressed hard into the corner of the living room, where he keeps the other things that he breaks. All Christmas he had at it: the bad television. A bookshelf with poorly constructed shelves. A plastic chair he shredded with his teeth. Eric’s old tropical-print bedspread.

The presents are smashed beneath the tree and the tree. The tree’s smashed too.

There’s no saying how high the snow is going to get, the weatherwoman tells us on TV, her face flickering. She is pregnant, and her belly sticks out over Tennessee when she faces east, blots out Kansas when she turns west.

What Eric and I know for certain is we’re being buried alive.

We call the police, the hopsital’s 24-hour line, but no one can move, the city’s in stasis.

When the phone rings, we think someone’s called us back, but really it’s our fancy French neighbor Sarge. He’s weeping, his komodo dragon having eaten up his legs. We give him the hospital’s twenty-four hour number but they’re not coming, not for days, not until the snow stops and they can unbury their truck.

Maybe you’ll get airlifted? we offer.

I hold the phone and Eric stands up to pace.

It’s okay, Sarge, I tell him. You’ll be… you’re putting pressure on your legs, right?

Eric is googling what to do, I tell him, but Eric is flattening his hair down with his hands.

Sarge breathes into the phone. He’s making this hiccupping sound.

One of us hangs up.

We draw the curtains and pull on another layer of wool socks. Eric and I nestle in an armchair together, me hugging my body over his like I’m armor. I can protect him this way, I make us twice as big.

I squeeze my legs around his legs.

You’re kind of hurting my stomach, he says.

I hook my arms around his back like a holster.

Then Anna wanders in.

And whatever injuries Anna sustained when we found him have healed in about four nights. He’s fully restored. So Anna is not exactly gentle with us. He crawls up on my back and chews on my hair.

Anna, no, I tell him, and this word, I know, he recognizes.

Eric punches Anna in the cheek.

But since Anna’s bigger now I hold my body out across Eric’s. Anna hits me not as bad. It’s hands, I tell myself. They’re just hands squeezed into blocks. It’s blocks it’s blocks.

But it is bad.

Afterward we press our bruises with snow. We spend hours googling “head wound treatment” and “diseases you might get if ape of unknown age bites you?”

There’s a ring of teethmarks on my shoulder. Eric’s ears got boxed. There’s long scratches across his arm.

We hate applying peroxide but we have to. We barricade the bedroom door. We tie a bandana through each other’s teeth, like hostages in television crime dramas.

I wake in the pitch pre-morning waiting. I find Eric’s face with my eyelashes. I say, We’re fine, we’re fine. I’m whispering, I’m finding his heart with my fingertips.

And how do you propose we do that? he asks.

I propose we use a shovel.

I squeeze his leg with both my knees, not sure how serious I am.

But soon Anna enters our bedroom, shoves the dresser from the door. I lay still as stones. I am expecting hands, I am expecting my larynx inside of fists. The smell he makes is copper and stale and piss. It comes closer.

Eric jolts under the covers and Anna bullies him, huffs in his face. I squeeze the comforter. When Anna drags Eric from the bed, he expands his chest until he is wide, boxy as a dresser. Eric crumples. Eric hurries into his snowpants and coat and boots and gloves, I’m going I’m going, he says and opens the front door, piled twenty-four feet with snow. Good God, he says, and starts a tunnel, to dig us out of here.

At night he tells me, I’m getting us out of here, Maggie. Give it a little longer. Give me a few more days. I kiss him with my bruised lips.

When he’s out with the shovel, Anna crawls back into the bedroom and looms like a canopy over me. How crushable I am, down here. I wait. I perfect this silence. I don’t know what is expected.