On the brink of having actual penetrative sex with my significant other for the first time since giving birth to our daughter, exactly three months after our little girl’s birthday, I couldn’t help uttering these fractured commands one after the other. Talk about a pre-sex buzzkill, right?

In response, my ever-supportive partner remained calm. “It feels the same,” he said as soon as he was inside me.

Physically, my doctor had reassured me that I was fit for sex, but psychologically I was a wreck. I was terrified that things would be permanently different ~down there~. Petrified that I would never be able to experience pleasure the way I once had. Most of all, though? I was mortified by the extra pounds I was still carrying on my hips, thighs, and butt. I didn’t want my lover’s frisky paws grazing my mushy tummy or my engorged breasts.

The brutal truth was that I didn’t feel quite like myself yet. Twelve weeks after pushing a tiny human out of my vagina, I had a long way to go before “getting my body back,” or feeling relaxed enough to enjoy sex.

When I first found out that I was pregnant, I assumed I’d be one of those women who loves being pregnant—who embraces every change to her figure while marveling at her body’s magical, feminine properties. I imagined casually posing naked for my partner every few weeks or so, clutching my belly with one arm and hugging my breasts with the other so he could capture every glorious stage of my natural transformation.

After all, I was a confident young woman! Before pregnancy, I was one of those willowy people who sincerely (maybe even annoyingly) enjoyed exercising and eating healthy to stay fit. Like any other person, I had my insecurities, but for the most part I was comfortable with my body. In my twenties, I was quick to tear off my clothes during most romantic encounters, or to suggest late night skinny-dipping. I wasn’t afraid to ask for what I wanted in bed.

But as soon as I started to gain weight during the first trimester, every uptick in the number on the scale unnerved me. Rather than celebrating the “miracle of life,” I found myself lamenting every bit of bulge that appeared on my butt, breasts, and belly. Even my upper arms seemed thicker in diameter. I felt wider everywhere—from ankles to neck—maybe because I was imagining it, or maybe because I was retaining that much water. Whatever the case, I didn’t like putting on weight, plain and simple.

Throughout, my partner was reassuring. “Do you realize how hot you are?” he’d say whenever he caught me naked. He looked at me longingly like he always had, and seemed genuinely turned on by my expanding form (especially my plumped-up chest and ass). Strangers were kind as well, often going out of their way to note how I “carried well,” or appeared to be “glowing.”

Still, I couldn’t see myself the way they did. By the second trimester, I was avoiding mirrors altogether. I dreaded getting dressed each morning because nothing seemed to fit. When my significant other caressed me tenderly, I sometimes recoiled from his touch. Try as I might, I couldn’t shake the feeling that I’d lost something—that I was no longer as attractive or appealing because I was no longer thin.

Between Googling the hell out of the issue, I sent frantic texts to friends imploring them for details about how much weight they’d gained during pregnancy. One friend reported gaining 40 pounds during her first pregnancy but only 17 during her second. Another friend gained 32 pounds by week 24, but barely gained in the weeks thereafter. Yet another gained 65 pounds, but lost it all somehow within two months postpartum. The information I gathered confirmed one thing: Everyone’s body, and every pregnancy, is different.

Somewhat unsurprisingly, the Internet told me a more harrowing story—that gaining too much weight can negatively impact both mother and baby. According to a 2015 report by the Center for Disease Control and Prevention citing guidelines from the Institute of Medicine (IOM) about gestational weight gain (GWG), 47 percent of US women gain too much during pregnancy. As stated in What To Expect When You’re Expecting, excessive GWG can lead to various complications, including hypertension, gestational diabetes, and problems during delivery, not to mention (ahhhhh!) stretch marks and cellulite.

Even after testing negative for gestational diabetes, I worried about every additional pound. I’d be lying if I said I was mainly concerned about health risks, however. Mostly, I resented the way I looked—and I wasn’t used to feeling that way about my body.

Standing in front of a full-length mirror, scrutinizing every inch of my third trimester figure, it occurred to me that I wasn’t actually the body confident person I’d always thought I was. In fact, all of those years I’d stripped naked so cavalierly, I was just lucky to be effortlessly thin.

In that moment, what I loathed even more than the sight of my naked body was the self-conscious woman staring back at me. You are about to be the mother of a daughter, I reminded myself. If you want her to have a healthy body image, you’re going to have to do something about your own fucked-up attitude. You’re going to have to rewire your brain, because thinness should not equal confidence. 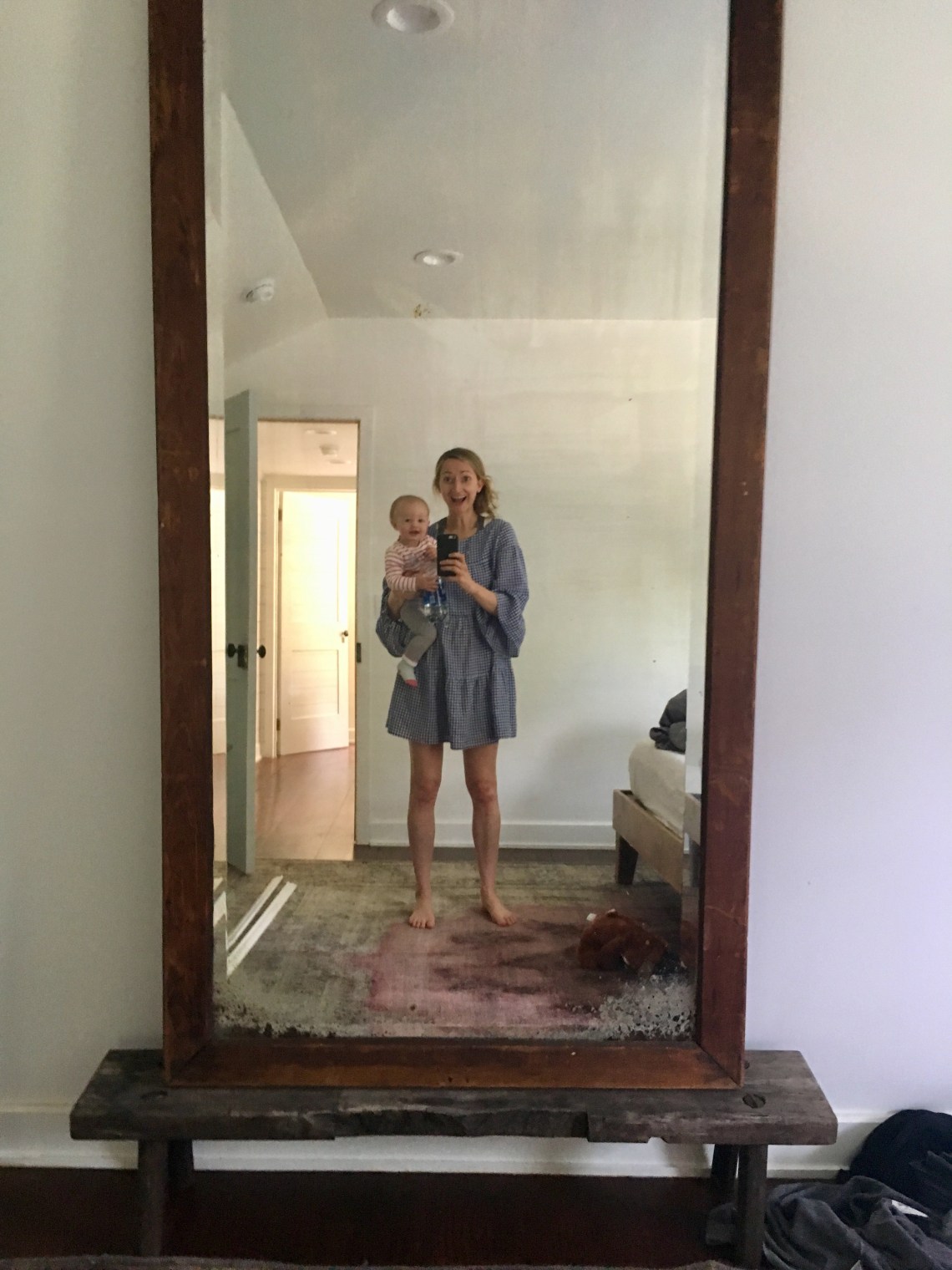 Thirty weeks into pregnancy, I pledged to be kinder to myself. I wanted to be a mother who could accept herself at any weight. Who felt good about herself for reasons that had nothing to do with physical appearance. Who would not be a hypocrite the day she coached her daughter into loving herself for her heart, her mind, and her character above all else.

I hid the household scale in the back of a closet and forced myself to compliment my own reflection. “You are smart,” I said. “Stop being so hard on yourself.” During sex, I tried my best to shelve any toxic thoughts that popped into my head.

Slowly but surely, I re-learned how to enjoy myself in bed. By the time my due date arrived, I was sending my significant other hilarious nude selfies so we could marvel together at my metamorphosis. The female body is truly capable of magnificent things, I had to admit.

Of course, developing an authentic sense of body confidence is an ongoing process. After giving birth, I faced a new set of hurdles that impacted my sense of self. I became preoccupied by how long it would take to shed the baby weight, and how weird sex would feel after the vaginal trauma that is pushing a pumpkin-sized baby out of a canal more suited to cucumbers. (Hence the back-to-sex meltdown previously mentioned.)

The difference is that my baby girl now exists in the outside world. Every time I hold her in my arms, I’m reminded just how important it is to lead by example on the body acceptance front. If I want my daughter to be comfortable in her skin, I have to keep working towards correcting my negative thought patterns. I have to learn to feel like myself, no matter what the scale says.

I adore the following, in no particular order: knee-high tube socks, acrostic poetry, and my little brother. Click here to learn more! Follow Mélanie on Instagram or read more articles from Mélanie on Thought Catalog.

Pregnancy Shocked Me, And Then It Almost Killed Me

10 Confessions From People Desperately Fighting The Urge To Cheat