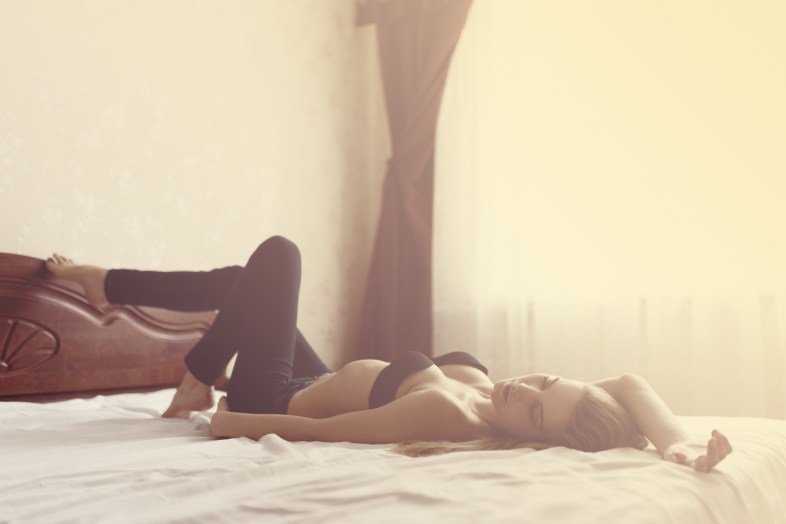 1. From riding the subway to riding each other (female, 26)

“I caught him staring at me on the subway and when our eyes locked, it was like we both knew we’d be naked together within the hour. He stepped off the train at the next stop and I followed, even though I wasn’t anywhere near my destination. Somehow, he seemed to know that I was trailing him. Moments after climbing the steps to exit, he turned suddenly in the street and stood there waiting for me to catch up. I practically sprinted the last few steps so I could wrap my arms around his neck. He grabbed my ass cheeks, lifted me up, and carried me down the street, the bulge of his crotch teasing my vagina just enough to get me sopping wet. We checked into the nearest hotel room and fucked our brains out for hours without even exchanging names. Then we said our good-byes and went our separate ways.”

“I was visiting a mid-sized city on business and I spotted her seated alone at the bar of a no-name restaurant. She was reading a book and picking at a plate of fries between sips of white wine. She wore flats and a sensible skirt and blouse, but her auburn hair was tousled in a way that told me she wasn’t the conservative type. There was an animal inside her. I took the stool next to hers but she didn’t acknowledge me, let alone put down her book. So I touched her thigh tenderly—careful not to scare her—to transmit the sexual energy I could sense brewing between us. We didn’t bother with dull pleasantries, abandoning our seats within seconds so we could go at it in the bathroom. It was a quickie, but a ravenous one. I ripped her shirt open and buried my face in her chest as she massaged my hard dick and then I fucked her standing up. We came simultaneously. It was the best sex I’ve had in years.”

We were both someone’s last minute date to the house party where we met. Neither of us knew the host, nor any of the other guests. But from the second we bumped into each other at the bar, equally eager to refresh our drinks, it seemed as if we’d known each other for years already. Since it was storming and particularly cold out for a summer night, we knew no one else would brave the screened porch. So that’s where we went, shortly after introducing ourselves. Name, occupation, astrological signs. That’s all the information we traded before embracing passionately and touching each other all over, our bodies like those of two frantic lovers reunited after months apart. We dry humped for what seemed like hours before we had actual intercourse. Lightning struck right as I climaxed, and I screamed the loudest I’ve ever screamed during sex, trusting that the thunder would drown me out.

“I was 25 at the time, working as a waiter at a fancy Caribbean resort. She was middle-aged, 48 maybe, but fit, on a girls’ vacation for the long weekend with a bunch of other women married to rich guys. She’d decided to do her own thing for a couple hours, I think, because she was alone there in the lounge. I could tell right away that she needed to get laid, and I felt like it was my duty on some level to be the man she used that night. After serving her a third martini on the house (trust me, even wealthy women love a free drink), I told her to wait for me inside the bungalow situated right between the pool and Jacuzzi. I’d be off in 15 minutes, I told her. By the time I arrived, she was already naked, splayed across a lounge chair, nipples erect. When she saw me, she slid her hand down her abdomen slowly until it was between her thighs and started playing with her clit, delicate but determined, as if instructing me. I stripped off all my clothes as fast as possible to join in the action before she could make herself climax. It was unreal. Names weren’t necessary.”

“He was a doctor at the end of his shift and I had just finished visiting a friend who was hospitalized after a minor surgery. I could see that he was exhausted, but the disheveled doctor off duty look was exactly what I craved. It had always been a fantasy of mine to hook up with a man in scrubs and this was the right one, my gut said. So I tapped him on the shoulder and asked him outright if he wanted to fuck. He was stunned at first, but then he snapped into action. He led me to a medical supplies closet with a spare cot where the doctors sometimes nap and locked the door behind us. Then he kissed every inch of my body and plunged his cock inside me. It was everything I’d hoped for. Now I can move onto ‘sex with a fireman,’ I guess.”

How To Better Handle The Pain Of Rejection