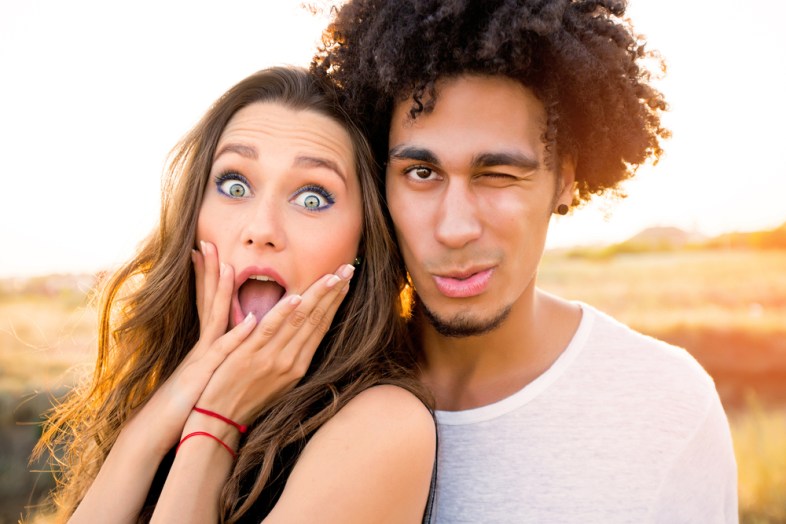 You don’t have to be in a relationship to do something crazy in the name of love. When you crush on someone hard enough, you’re bound to push boundaries and to break your own rules—to do anything to impress the object of your affection so you can finally win them over. In partnership with the CW’s ‘Crazy Ex-Girlfriend,’ we bring you this list of the most insane things people have done to attract a crush.

1. “I wanted to seem really cool in front of my crush at my first co-ed party in middle school, so I made the mistake of playing Truth or Dare and boldly demanding a dare when it was my turn. The challenge? Streak across the front lawn in my underwear. Obviously, I couldn’t back down in front of my crush. While I was running, half naked, a few people (including my crush) decided to hide all my clothes. I ended up heartbroken, shivering, and crying in the arms of my friend’s mom. Not the coolest look.”

2. “As a teenager, I fell really hard for this super laid back surfer guy. We were working together as volunteers at an event for kids, and I decided to show him how fun and carefree I was—just like him, you know—by spontaneously hopping inside the bouncy castle and jumping around like crazy. I ended up deflating the entire thing, which was built for kids under age 10. Two of the underprivileged children who hadn’t gotten a turn yet burst into tears. It was awful.”

3. “I lived in Hoboken and she lived in Coney Island. In the middle of the night during the workweek, I rode the train into Manhattan and then took the subway all the way out to Coney Island, which is about a two-hour journey. Using a can of pink spray paint, I wrote ‘I love you’ in giant letters on the platform of the station where she started her morning commute. I stood there, waiting to ask her out right after she saw my message. A year later, we were married.”

4. “One time I organized a game of pick-up basketball because I knew my crush played in his spare time and I figured I’d invite him to join. To other people, that might not sound like a crazy move. But if you’ve ever seen me attempt to dribble or shoot, you’d understand what a grave mistake I’d made, all in the name of spending an hour with my dream guy. What I didn’t account for is that I’d be in a state of constant panic for the entire hour. I looked like a middle school version of Michael Cera stumbling around the court, and every time someone passed me the ball, I had a full-blown anxiety attack. Needless to say, my crush was not impressed.”

5. “In college, I was trying to land a dude who was obsessed with ‘Dr. Who.’ I’d never even seen the show, but I decided to become an expert in a single weekend so I could then impress my crush with my expansive knowledge. I binge watched episodes while researching on the Internet non-stop for 48 straight hours. The thing is, I hated it. We ended up going out on a few dates, but there was zero chemistry between us.”

6. “I was obsessed with this really athletic swimmer girl in high school and I convinced myself that the only way she’d notice me was if I got into crazy good shape. I worked out so hard, I lost ten pounds in three weeks. By the time I had the guts to ask her to prom, I felt so confident because I had a six-pack for the first time ever. Of course, she managed to shred my ego anyway with one soul crushing ‘no.’”

7. “I bought a last-minute plane ticket to Australia on a whim to hang out with this guy I’d met backpacking in Europe the month before. I spent every dime I had left on that one-way ticket without even thinking about how I’d get back. Thank goodness I did, though. Two years later, we’re still together!”

8. “When I was 14, I stole $250 from my 10-year-old brother—his entire life savings, probably—to buy the girl I was ‘in love with’ back then an expensive bracelet for her birthday, even though we definitely weren’t dating. When my mom found out, she made me ask the girl for the gift back so I could return it and reimburse my brother. It was the most humiliating experience of my life.”

9. “I was so desperate for an excuse to talk to my crush in college, I actually ended up changing my major to his. I figured I’d enroll in a few of the same classes, ask him questions, become his study buddy, and then his girlfriend. He was really interested in discussing the major, but ultimately not so interested in me! I changed my major back a few weeks later, confusing my academic advisor even further.”

10. “The summer after my freshman year of college, I was 19 and head over heels for this beautiful, curly-blonde-haired girl. She had a boyfriend who built motorcycles or something, so I had to think big to win her over. I ended up recruiting this Physics major from UCLA to help me bungee jump from a 180-foot bridge just to prove myself to her. It was definitely illegal and ridiculously dangerous, but things worked out—for exactly one week.”

11. “In the ninth grade, I was fixated on this boy who seemed to really like the fact that I spoke Spanish. So any time he was around, I’d whip out my cell and fake a phone conversation in Spanish. I would have these really long, detailed conversations with myself basically. It was exhausting, but it totally worked. We ended up dating for four months, which is eons at that age.”

12. “I was such a sap as a teen. I fell for a popular girl and decided to mimic that famous scene from ‘Say Anything’ with John Cusack. I even managed to source a vintage boombox. It was pathetic. I don’t even think she was home that night. But part of me wishes I still had that crazy romantic streak in me.”

13. “Summer after freshman year of college, I threw a pregame party at my parents’ house just so I had an excuse to invite my crush over. But my parents were only out at the movies. When they got home, about two hours after they’d left, my dog was in the lobby of our apartment building, the front door was wide open, and there were empty bottles of alcohol all over the place. I was grounded for the rest of the summer. NOT awesome.”

Click To Read More From Our ‘Crazy In Love’ Series!