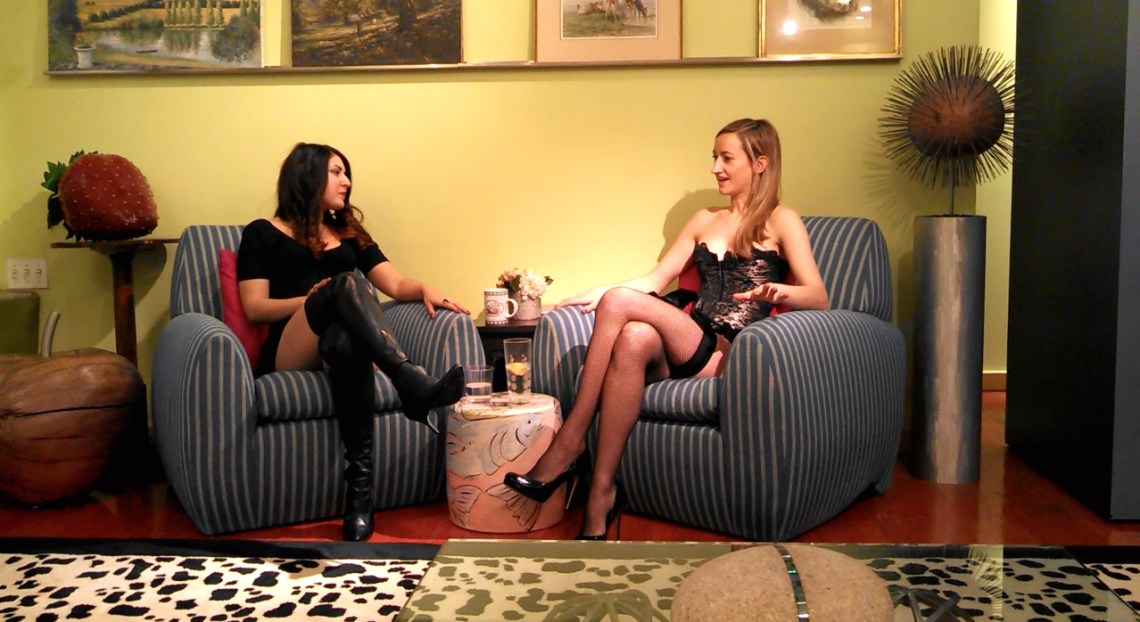 In white thigh-highs topped with bows, four-inch pumps, a short plaid skirt, and a cropped blouse knotted at the chest a la early Britney Spears, I consider my reflection while twirling pigtails to amplify the innocent look.

Equally startled and amused, I straighten my back, suck in my torso, and eye my master.

“Now bend over,” says Boyer, emitting authority with each calculated pace in my direction.

Save for a thick layer of rouge on her lips, the raven haired Boyer wears all black. As if teasing the punishment she’s about to deliver, she smacks a ruler into the palm of her hand several times before declaring: “Your skirt is two inches too short!” Then she pushes me over the arm of a chair, lifts up my skirt, and, to my astonishment, gently grazes my rear while scolding me softly for the inappropriate attire.

Soon enough, I recognize Boyer’s sudden tenderness for what it is: a ruse designed to enhance anxiety. With each passing moment I grow more nervous about the impending spanking session. At what point, exactly, will she dole out the lashings? How hard will the hits be? And how many will I receive? 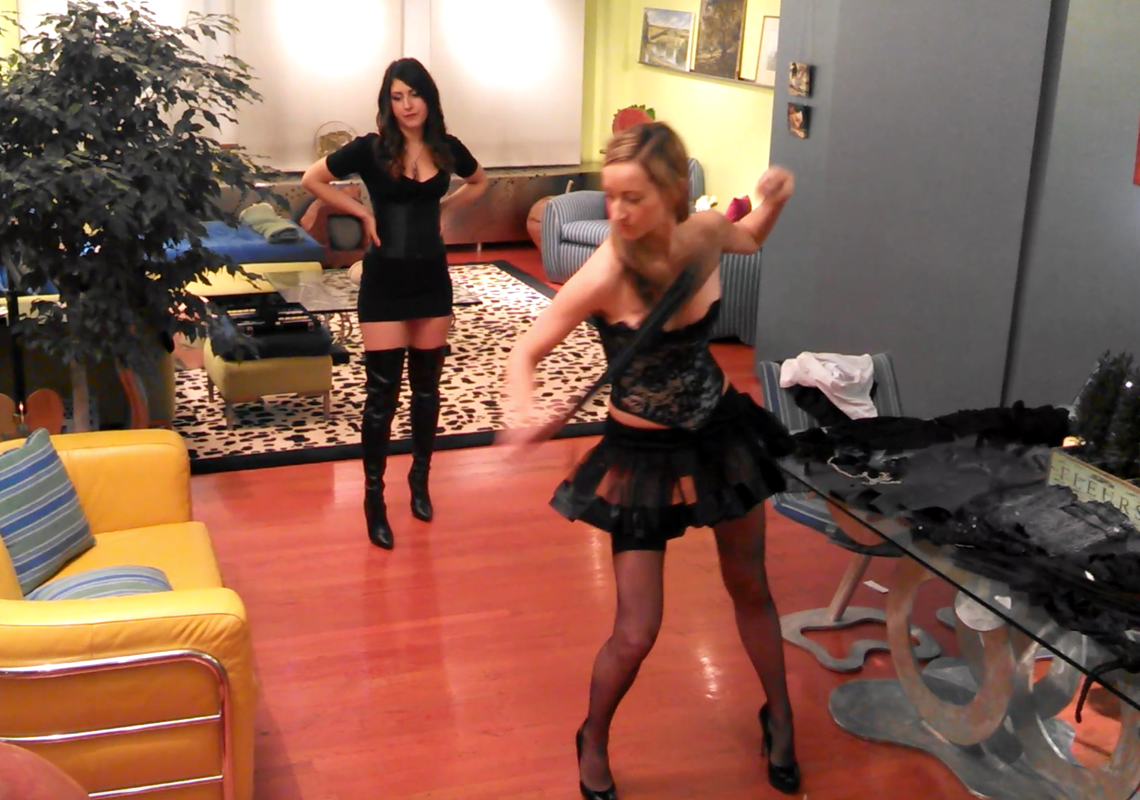 “Overall, it doesn’t look like there is anything special that makes a person curious about BSDM,” says Dr. James Cantor, a sexologist and associate professor at the University of Toronto Faculty of Medicine. “Instead, it seems that people who are extroverted and open to experience in general will experiment with all kinds of things—sex being just one of them.”

Boyer began by revealing the contents of her “goody bag,” an unassuming beige carpet duffle that held a paddle, two floggers (one small, and one “to work up to”), a crop, a pair of fur-lined handcuffs, a purple dog collar, several corsets, and a few costumes. Splayed across my dining room table, the erotic display intimidated, but Boyer patiently addressed each of my concerns (How exactly does one flog? I feel strangled by those plastic capes at the salon, so I don’t know about the collar!) without a hint of condescension. Then she asked me a series of questions to evaluate my preferences and limits.

“I’m interested in the basics,” I reminded her. “And being the submissive,” I added, figuring this urge had something to do with my non-confrontational nature, or being a middle child. Boyer explained, however, that people in positions of power often assume the “sub” or “bottom” role because they crave respite from the pressures of being in charge. Was my inner control freak desperate to break free?

By tapping into the schoolgirl theme, we planned to review various spanking positions and techniques. Boyer also promised to introduce me to a host of tools and textures. 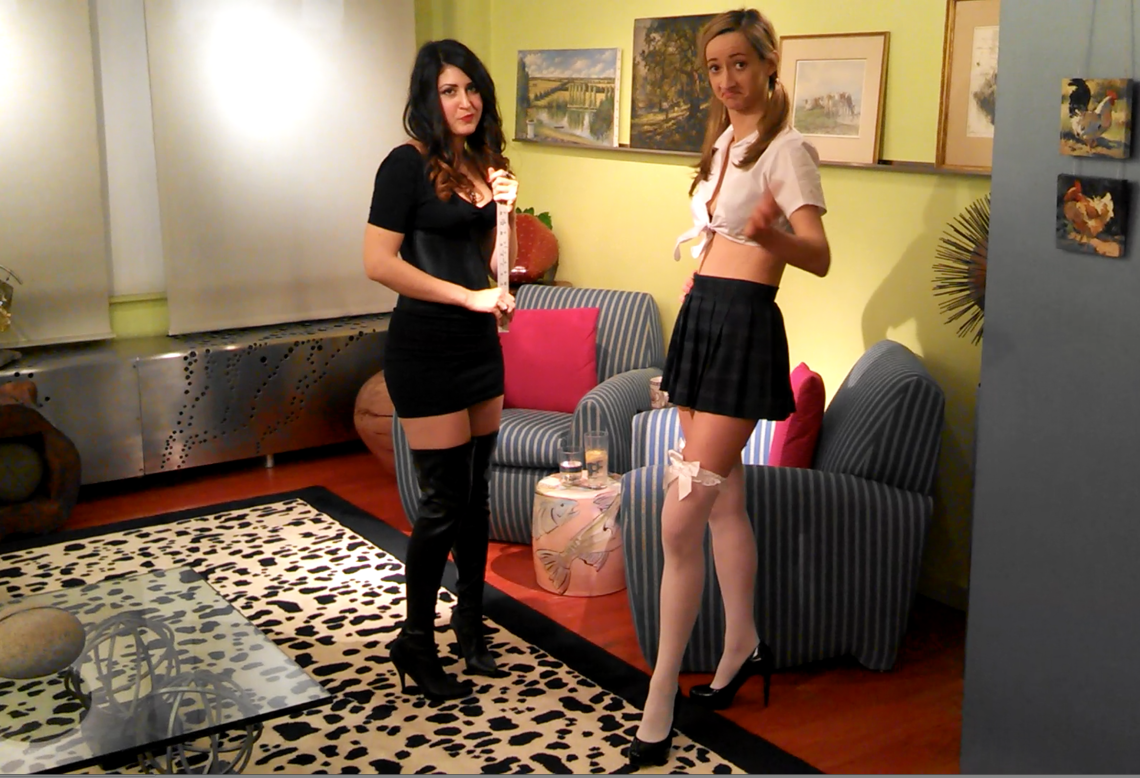 “The key is to dance along the fine line between pain and pleasure,” she instructed.

But until I am bent at a 90-degree angle, anticipating the moment Boyer will stop teasing me with the ruler’s edge so she can smack my backside properly, I don’t fully grasp what she means about balancing these opposing sensations. Sure enough, after demanding that I count out loud while she hits me 10 consecutive times, Boyer returns to light stroking, as if healing the wounds she just inflicted. Such momentary “rewards” are consistent throughout our session, during which Boyer delivers blows with a paddle, a crop, and a flogger while I am sprawled across various pieces of furniture or lying across her lap. At one point, she handcuffs me and drags me to and fro so I’m forced to walk backward or forward in sudden spurts according to her whim.

For the most part, I welcome the adrenaline rush that accompanies each new, unexpected round of discipline. While there is something unsettling about the uncertainty one invites by relinquishing control, there is also something undoubtedly exciting about it.

At a certain point, I worry that my ass and legs are swollen and riddled with red marks, but I don’t mind so much—because I know I can put an end to things whenever I please (my safe word is “Simba”), and because Boyer is supremely attentive, peering into my eyes regularly to check in. Later, I learn that she was also closely monitoring my body’s temperature and appearance.

After an hour of punishment, Boyer insists on discussing our time together, noting that “aftercare” is critical. “Especially following sessions that involve harsh degradation and/or intense pain, it’s important to remind your partner that you care about them,” she says. “You also want to figure out what they liked or didn’t like for future reference.” An impressively reasonable directive.

When I report that I favored the crop, Boyer guesses, correctly, that I was once a horseback rider.

“People often incorporate past experiences into their fantasies,” she says. “I think it’s helpful psychologically.”

My gut tells me this makes sense. Suddenly, so does the fact that Boyer considers herself a “drama therapist.”