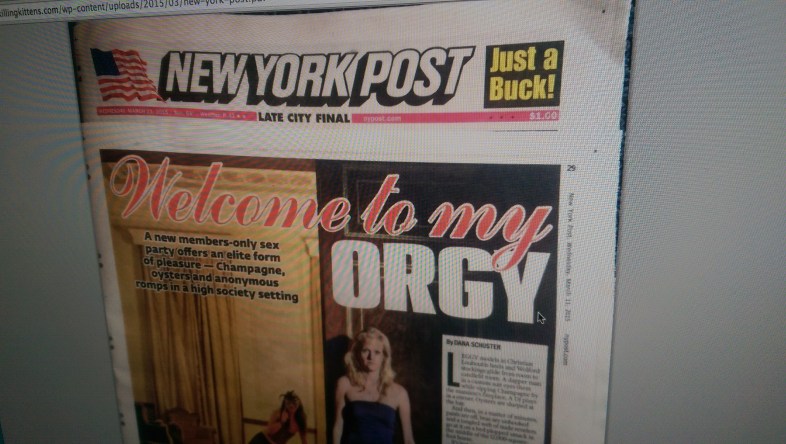 Killing Kittens, a London-based society for the “sexual elite” has received an onslaught of media attention in conjunction with its recent New York City launch. But so far, most of what we’ve learned from a sex party regular who attended Killing Kittens’ opening U.S. bash indicates that the operation isn’t quite as selective or glamorous as its website would like us to believe.

1. Its New York debut was a poorly disguised press event.

2. The owner of Killing Kittens is using her “friendship” with Kate Middleton to promote her “elite” sex club.

Emma Sayle, Killing Kittens’ press hungry owner, has been trying to align herself with the Duchess of Cambridge as far back as 2012. We’re guessing Middleton’s actual buddies don’t go around using her name to advance their business objectives. And aside from an eight-year-old photo of Middleton and Sayle walking the streets of London, the connection between the two seems shoddy at best.

In an interview with The Daily Mail, Sayle explained that she attended Downe House, an all-girls school where Middleton was briefly a pupil, but that she has “no recollection of Kate at her school”. Years later, in 2006, Sayle founded a charity fundraising group called The Sisterhood that counted Middleton as a member, but only for a short stint. Sayle’s success at exploiting such a loose connection is a testament to her marketing savvy, and the media’s thirst for clickbait-y headlines. What it is not is a testament to the bonds of friendship. As for why Middleton hasn’t bothered denying Sayle’s claims, we’re guessing Buckingham Palace has a few more important items on its agenda.

“As in London, each applicant is vetted according to our strict criteria,” reads Killing Kittens’ website. I applied for membership at 10am on Wednesday, March 18. This entailed providing some basic biographical information (birthday, gender, email address, phone number, etc.) and uploading a few photographs. A few hours later, at 4:32pm, I received notice that my account had been vetted successfully. There was no fee. As for admission to the actual party, according to our spy official identification was not required. Emails were cross-checked against a list at the door, making Killing Kittens easier to get into than most nightlife destinations in the Meatpacking District.

4. Guests had to shell out extra for drinks.

No one likes a cash bar—not even those who can afford it—because they aren’t chic. Who wants to reach into their pocket every time they need to buy a round, or risk forgetting their credit card after starting a tab? If you’re really targeting the well-to-do set, why not charge $500 to $1,000 a ticket and have an open bar rather than charge $250 per couple and make people pay to booze? Weird.

5. The décor was more sad bachelor pad than posh penthouse.

In contrast to secretive, un-Googleable sex parties, which our insider reveals often take place in the penthouses of fashionable hotels, the Killing Kittens event was held in a Flatiron District apartment that was “nice, but not all that posh or modern.” The main room featured black leather couches surrounded by a giant bed (much larger than a California King) dressed in black sheets. A few hints of red punctuated the otherwise dark space, and bowls of condoms were peppered throughout. As for the music, “They played pop house from a few years back—stuff like Afrojack.” If you’re starting to feel a bit like you’re on the set of a low-budget porno, you’re not alone.

6. The crowd wasn’t stylish, either.

Although many of the female guests were reportedly clutching Chanel handbags or Birkins, we all know that money can’t buy style—and that it only goes so far in buying good looks. “Think decadent, raw physicality with beautiful people in a beautiful setting,” reads a Killing Kittens’ party description. But our spy characterized the crowd as “about average” in appearance, and definitely far less attractive than the “models in lingerie” populating other sex parties around town—you know, the ones that work hard to maintain some semblance of caché. Writes the Daily Beast, “Within an hour of arriving, two of the more attractive women I’d spotted earlier are frantically pushing the elevator button.”

7. People were allowed to ditch their masks altogether.

A mask mandate evokes the intense erotic intrigue of Eyes Wide Shut and the pageantry of medieval masquerade balls. By requiring guests to conceal their identities (an email sent to partygoers stipulated “no masks, no entry”), Sayle successfully imbued Killing Kittens with an element of mystique—but only up until people abandoned their disguises altogether, and it became clear that Sayle’s seemingly strict directive was hollow at its core. According to our friend, who dropped $70 on a beautiful bejeweled piece specifically for the night, you could see most peoples’ faces twenty minutes after they entered. When no one bothers to enforce the costume requirements at a theme party, everyone is forced to wonder: What’s the point?

8. They served strawberries and oysters.

9. The premise is borderline offensive.

10. Barely anyone was actually having sex.

Men, You Aren’t Getting Sex From Me Until You Take Me On A Date (Like, A Real One)

10 Reasons Why Couples That Party Together Are The Happiest Ever