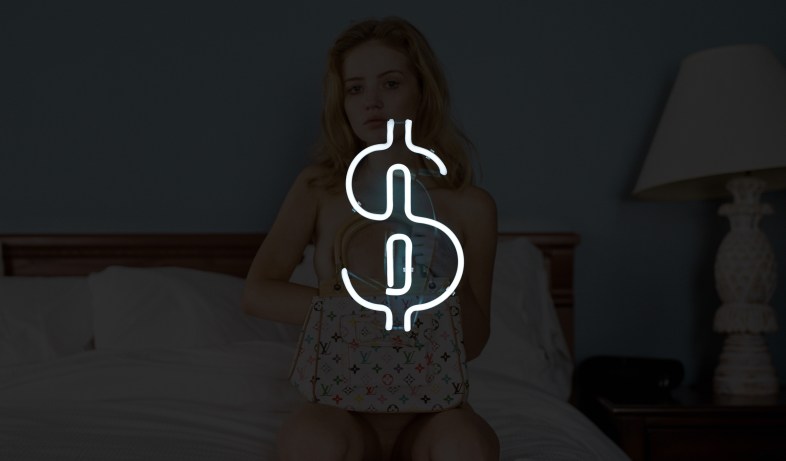 I awoke instinctively at 5:15 in the morning and reached for my cell phone. I anticipated a voicemail or text from my firm’s Tokyo-based trader regarding overnight market activity. If something relevant happened—a terrorist threat, say, or a natural disaster that forced the closure of an Algerian oil rig—I had to know about it before sitting down at work at 6:15. Instead, what stared at me was a text message from my boss, Carl Pratt*, a fortysomething married man with kids. Delivered at 3:30 a.m., it read: “Just woke up from a dream. I had you on your belly and took you from behind. You came multiple times.”

I laughed at Carl’s presumption of prowess and use of the word belly, which seemed to date him. Then I wrestled momentarily with the decision to reply—a silly dilemma, perhaps, but the kind I’d grown accustomed to since beginning my career as a trader at an elite investment bank.

Out of hundreds of bond traders at the company, I was one of about 10 women, the only one hired from the 2002 class of summer interns. My colleagues were hardworking, ambitious men.

Because we all shared the dream of a luxe life and already earned enough money to live quite well, I was comfortable in their world. I worked the long, stressful hours happily. As nonchalantly as they did, I downed $250 bottles of wine and mounds of Nobu’s rock shrimp tempura.

If anything, my token status gave me an extra thrill. There was something doubly funny when I drilled a Nerf football into some guy’s head. Something gratifyingly titillating about my accidental flubs, like the time I announced, too loudly, “I love nuts.” I enjoyed being called a “fucking dullard” or being instructed, patronizingly, to “remove head from ass,” because my reaction—to grin rather than cry—impressed the guys. I loved their attention and the daily opportunities to prove that I fit in.

And fit in, I did: in sass, in mathematical acuity, in ambition. I signed a contract with my strict French parents at age 10 that assigned a monetary value to each grade on my future report cards. Performance was expected (99 percent on a test meant nothing if a classmate scored 100), and it translated into cash. I never forgot that lesson.

What separated me from my colleagues was physical: my 5’9″, 120-pound frame, my long, blondish hair—and my vagina. But I didn’t view these distinctions as disadvantages; they were the reasons Carl confided in me about personal matters, like his frustration with a stay-at-home wife who supposedly whined incessantly about having to carry their children up the stairs of their McMansion (after the nanny went home, that is). Being his confidante gave me an edge, I thought. Certainly Carl would want to reward the person with whom he shared the intimate details of his domestic travails.

I had two options with my boss: trade sexual banter or resist. Typically, I chose the former, feeling blessed to be able to play the sex card rather than cursed to have the game foisted upon me. I also didn’t worry about teasing Carl, he of the Napoleonic complex and odd superstitions. My overwhelming preoccupation was procuring a fat bonus check. Like most traders, my base salary wasn’t terribly high—$75,000 at the start of my third year. The bonus was all, and getting the right number rested on one thing, as I saw it: my willingness to promote my boss’s fantasy of fucking me. (Sure, performance mattered, but my reviews were always stellar.)

And so, that morning I texted Carl back: “Wow. And I thought I was the only one still having wet dreams.”

A short while later, I traversed the currency-colored carpet of the city-block-size trading floor. I passed rows of communal tables divided into individual spaces by territorial traders. Within the hour, hundreds of screens would display the prices of thousands of bonds in a tiny illuminated font. The overnight quiet would be displaced by the cacophony of grunting men tapping keys and slamming down phones. I adored the place for the savageness its inhabitants exuded; for the heavy demands the culture placed on its participants; for the bizarre brand of orderliness residing beneath the appearance of chaos.

Taking my seat, I pondered how the day might play out. Carl, I knew, planned to spend the night at a hotel in the city. “Dreams do come true!” his second message to me read. “Late meeting tonight. Staying at the W. We’re both getting lucky.”

Until then, Carl and I had flirted regularly, but it had been difficult to actualize our exchanges because he lived in a far-flung suburb. In retrospect, it was naive—perhaps willfully so—to imagine that there was some kind of protective moat that kept suburban men from bedding city girls. Maybe it was equally ignorant to wink coyly or flip my hair coquettishly without considering that I might be expected to go further. Whatever the case, it was not until I faced the real prospect of sleeping with Carl that I became apprehensive about what I’d set in motion. At work that ominous day, I quantified my self-respect: Was it worth 25 grand, 50, or more? I let the question flit through my mind but not take root.

After a long day of bids, offers, high fives, and bacon-egg-and-cheese binges, I went home. Predictably, at around midnight, my cell phone vibrated against the kitchen counter. I sat up in bed, disconcerted. I entertained the idea of ignoring the call but picked up the receiver anyway.

“Come over,” Carl demanded, his voice raspy for a nonsmoker.

“You’re drunk,” I said. I pictured his raccoonlike features, manicured hands, and graying temples. Although he wasn’t conventionally handsome, there was something sinister and sexy about him, something alluring in the way he rolled his shirtsleeves inward, enhancing his likeness to a pirate.

“What do you mean you can’t? Come over.”

“That time of month?”

“Yeah,” I said. And with this admission—it was actually true, but not something that normally interfered with my sex life—came the vivid image of myself in adolescence, that now-cherished time of innocence before menstruation. At the same time, I began to imagine Carl having sex with me as he’d suggested. While I doubted my capacity to follow through, I saw him grasping my waist, his torso oscillating behind me with metronome-like precision.

“A little blood doesn’t scare me,” Carl said, drawing me back to the conversation.

“I pulled my groin,” I added, knowing this sounded contrived, although this, too, was true. It was also true I was stalling.

Carl laughed. When his chortle melted into a sigh, something told me he was touching himself. I felt mischievous. And aroused. “Hey, rent a movie,” I said, “for both of us.”

“Done!” he exclaimed, employing the trading colloquialism to confirm that a deal is contractually sealed.

I pulled off my pajamas to change. Naked, I stood before the bathroom mirror, considering my reflection. Gently, as he might, I grazed my legs; they were cleanly shaven. My hair was matted, but I fixed that by pulling it back into a ponytail. I splashed cold water on my face, sprayed perfume on my neck, and dabbed a bit on my lower abdomen. I threw on jeans, a T-shirt, and a thin cashmere sweater. I reached for my coat and went out the door.

Outside, I hailed a taxi with nerve-wracking ease. The driver knew where the W Hotel was in Union Square. Within minutes, we were three blocks from the entrance, at which point I found myself wondering what I meant to Carl. I wasn’t deluded about the nature of our relationship, but I couldn’t separate sex and emotion completely. Or could I? Don’t be ridiculous, I told myself. You’re not like other girls. But I couldn’t stop myself: Did Carl feel anything for me beyond a desire to sample something new? Something naughty? Stop it, you’re using him too. But, but, but. Was my push-pull predicament his fault, mine, or no one’s?

The cab fare came to $6.90. I handed the driver $10 without asking for change. I felt benevolent. See? I am a good person.

My first few steps from the cab were plodding: Seize this opportunity. You can’t gain anything. You can gain everything. Fuck. Shit. I broke into a spastic trot for the last five feet separating me from the building. In the lobby, I located the front desk.

“I’m here to see Carl Pratt,” I stated, or admitted.

Too briskly, the elevator transported me to the twelfth floor. I stood, ears popped, on the hallway’s plush carpet, pondering again. I imagined Carl’s arms around me. Then I saw him at work, rounding the corner to my desk, vigorously shaking the back of my chair, upsetting my balance before locking me in his devious grin.

I was Carl’s underling, but I refused to consider myself a victim. Our audacious, perpetual flirtation was not one-sided. I could have ignored him. I could’ve avoided the girlish smiles and spurned the extra attention. Foreseen that it might not end well.

I looked from the indiscernible smudges of the abstract painting on the wall to the small numbers on the door to my left: 1201. Neither told me what to do.

I glanced behind me. In an inspired moment of clarity, or out of acute fear, I made a promise to myself: If I could lunge back toward the elevator doors in time to thrust my hand between them, I would go.

A few impossibly large steps brought me to the elevator bank, and I sprang toward the narrowing gap. A soft beep sounded. A brightly lit empty box opened before me. I was gone.

Ultimately, Carl did fuck me. At my year-end review a few months later, I sat in his small, glass-walled empire of an office. He leaned back, hugging himself, then handed me the 8.5″ x 11″ sheet of paper that detailed my bonus, my worth: $65,000.

You bastard, I thought. That number, at least $35,000 too low by my estimate, mocked me. It was less than what I’d received after year two, and being “paid down” was a serious slight on Wall Street back then. Of course, in the faraway place called the Real World, $65,000 was not a paltry figure. That didn’t matter. I was stunned, irate. I considered pleading. I wanted to tell Carl that he had robbed me of what was rightfully mine, because I was a good bond trader. Screw you, I wanted to say. Go home to your kids, your wife, and your two-story hell. But I didn’t. I knew I’d put myself in this position. Carl had never cared about me or my career. The image he had of me was one I’d allowed him to create: a sex object who failed to live up to her implicit promise. When I wounded his ego, I became as useful to him as one of the trinkets on his totem of power, a bobblehead doll.

Without a word, I walked back onto the trading floor, past the plantation of computer stations manned by employees like me. Recognizing our commonality, my rage receded. I had been ruthless, as they were, because I wanted the rewards of success—to assert control and live an independent, enviably cushy life. I felt absurdly unoriginal.

I stayed on for a month, but it really ended for me in Carl’s office. What happened between Carl Pratt and Opportunistic Young Melanie shocked me into seeing my life was empty: no boyfriend, few friends, no focus outside my monetary self-interest. The one smart move I’d made was to save some money, so when I quit to start writing, I had a cushion. Oh, and I had some material: the indiscretions and folly of youth.

This story originally appeared in Elle.

Stay Away From Any Man Who Makes You Feel Like This