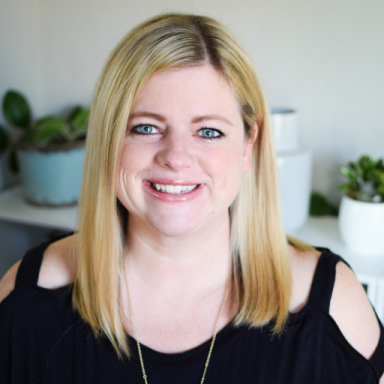 Last winter, I attended a non-profit fundraiser sans Chandler because he was on his way back from a ski trip. I was standing outside waiting for valet to bring my car to me. I was leaving kind of early to relieve the babysitter, and only one other person was outside — a noticeably wealthy woman about my mom’s age, who was also waiting on her car.

After successfully avoiding eye contact for several minutes (social anxiety is real, y’all), she finally caught me looking at her larger-than-life fur coat and started chatting me up. Standard small talk ensued, but then she asked me if I had a family and if I worked. Yes and yes, I explained.

After answering her follow-up questions, she then said to me, “I’ll never see you again, so I can say this. Both of my children, ages 27 and 32, have told me ‘Thank you so much for not making us go to daycare.’” She went on and on, as if she’d had just enough alcohol to be blissfully unaware of how inappropriate this conversation was. “Don’t you just wish more than anything you could stay at home with that baby?” she pried. “Will you consider it for me? Please just tell me you’ll consider it for me.”

By this point, the rage was building in my body, and I knew I was close to an outburst. I turned away from her physically, hoping and praying my car would come around the corner quickly.

“I’ll never see you again so I can say this,” she repeated. “Just tell me you’ll consider it.”

Unfortunately, I’m one of those lucky people who can rarely be mad or hurt without crying. I felt the tears coming, but I was able to push them back down. Instead, my voice shook as I said, “You may never see me again, but that doesn’t mean your words aren’t hurtful and won’t have an impact on the person you’re saying them to.”

She immediately started backtracking, perhaps realizing how rude she’d been. I honestly have no idea what she was saying, because my heart was pounding so loudly it was the only thing I could hear. My car finally arrived, and I got in it without saying another word to the woman.

I cried the entire way home. I’m not talking about a few tears streaming down my face — I was hysterically bawling for the entire 30-minute drive. This woman, whom I didn’t even know, had ruined my entire evening.

I wracked my brain for a while, trying to figure out why she felt so compelled to say these awful things to me. Why would her kids even know to thank her for not making them go to daycare? Did she regret her decision to stay at home? At the end of the day, I’ll never know, and it really doesn’t matter.

What does matter is that we stop this behavior. We need to build each other up, not tear each other down. Think about how different our conversation could had been if she’d said, “Oh wow, I’m sure being a working mom is so hard. Hang in there, mama.”

A self-proclaimed back-up parent on quest to break down gender norms.