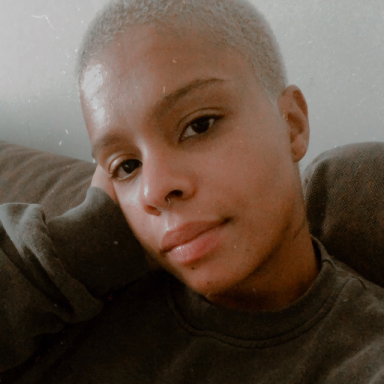 She said she understood. She had been there before. She recalled the lonely nights, the longest days, the suspense. She knew it all too well. The dreams that played out the story that she wanted, the one that would never happen. The one that was so far away it blurred all the lines she crossed so many times. The one that only allowed her to fall asleep at 3 a.m. She was finally getting eight hours of sleep now. She urged me to put an end to it, but she knew I wouldn’t listen. She sent subliminal messages through positive affirmations that only took up space on my phone. She never denied the love that was once there. But still, she told me to let him go.

She said it wouldn’t hurt forever, but I had to stop going back. She said I needed to stop reaching out. I knew she was right. I wished I could be as tough as her. She had pride, the kind that called out to you every time you even thought about picking up the phone. The kind that would rather walk through fire than let another tear fall to the floor. The kind of pride that kept her day full—she was a busy woman. The kind of pride I would kill for.

She said I was a fool. I deserved better. “Why do you keep doing this to yourself?” she would yell. She had never been in my shoes. She didn’t understand the suicidal game I played with my heart. She never had to wonder why. She had never tasted the bitter bite of rejection like I had. I was attached to you in ways I never thought I could be to another human. Romeo and Juliet type of shit—kind of twisted. I’m not even sure when it happened. Maybe it was on a Wednesday standing in that ridiculously long line for that concert. Or maybe a Monday outside of that Po’boy shop. Maybe if I can remember the exact moment I lost all control of myself, I could undo it. I could retrace my steps like that time I misplaced my keys. It took me a while to find them, but I did. She was responsible—responsible for her heart and her keys.

She stood in the middle. She wanted me to get out, but she hoped it would work out eventually. She never said it like that, but I knew what she meant. She knew how much it would mean to me to have someone backing me up. Someone to say I wasn’t crazy for trying to make it work. Crazy for ignoring all the red flags that I hoped would change colors like the sky during sundown. She knew when I wanted to talk about him and when I didn’t and when I felt indifferent. She had finally met the love of her life, and while my world spun, hers had finally slowed down. I was happy for her, but maybe a little jealous. I envied them all, honestly.

She was always indifferent about the situation. She was the perfect person to be around when in a dark place. I was often in limbo in that dark place. Happy hour was usually her plan to snap me out of it. Sometimes it worked and sometimes it didn’t. I guess there was nothing left to try. We had carefully planned how to do this—distraction. The thing is, distraction just sort of pushes the madness out of sight and out of mind. It doesn’t kill it; it doesn’t make it disappear. So, what was I to do with that? We ordered another round, double. Sometimes we stayed out all night until the sun came up, and even then we had a little more energy left. Sometimes I hated being too wasted because I would be weak and want him. Sometimes I dreaded becoming sober because I would be weak and remember him. She knew it was a hard pill to swallow, but she begged me to let him go.

She was a free bird. She never wore a bra or cared what anybody thought about her going back. She had been hurt before, but now believed he was a changed man—maybe he was. She liked to hear me sing Adele songs while riding in the car and she would sing along too. Sometimes we got high together, but I could never keep up. He was my drug of choice, and I got so high off of him I began to think I was meant to float. What did we need the ground for anyway? As long as I was on this green earth, I would love him. We inhaled and exhaled together, telling stories and chasing it down with whiskey. She drank it straight, but again, I couldn’t keep up with her. She danced to her own drum and I envied her for it. I wanted so bad to just not care what anybody thought. But it mattered. I couldn’t make them understand why I was still here. Maybe because I didn’t understand it myself. Maybe because I knew they were right and I was wrong—we were so wrong. I talked for hours with my free bird. She took her whiskey neat, like a pro. But even a pro, even a free bird in her drug-induced coma, tells the girl in love the words she can’t stand to hear:

They all told me to let you go.

Everything changes when emotions turn into ink