Way back in the far away year of 2013, I ran away from a relationship that was unequivocally toxic. Both of us had trust issues and attitude issues. I also knew I had to get out of small town Indiana where I had spent the past 21 years, so I began to scour the Internet for a job, any job, far away from where I currently was located.

At this point in my life, I was not really a world-traveler. Yes, I had gone on yearly vacations to Colorado and Florida with my family (much like every other cookie-cutter family), but that was pretty much it. I had yet to venture outside of my home state on my own. So when I came across an article listing jobs for college students, “camp counselor” caught my eye.

I began to search the web for camp counselor jobs. I applied for several, and spent hours looking at different websites for camps of all kinds – sleep away camps, day camps, sports camps, book camps. You name it, I saw it. One camp in particular in upstate New York caught my eye. I sent in an application to be a counselor, and went to bed.

The next morning, I got a call from one of the directors offering me the position – and that was that. I called my parents and informed them I would be spending my summer in upstate NY – a place I had never been to and a place I knew nothing about. They were, understandably, very hesitant with the usual questions. Was this place legit? How much would I be paid? Did I know anyone who had worked here? How far is the drive?

I told them that yes, this place seemed legit, I wouldn’t make that much money, I did not know anyone who worked there, and the drive would be about 14 hours.

June rolled around and off I went – just out of a long term relationship, full tank of gas, and I was not looking back. After 14 hours of driving, I arrived at camp – which would eventually become my summer home, and the place that I would soon meet my future fiancé.

So there I was at a place far from home with hundreds of people that I didn’t know – but the people that I met there were from all over the world. Some from the United States, Australia, New Zealand, England, and more. I met a handsome Army man named Colin – he was working as a driver, and I was working as a gymnastics coach. He had come to find camp the same way that I did – just looking for a new place and a new job.

That first summer passed with both of us being friends, but having different love interests – me with another counselor, and he with his girlfriend of the time who lived nearby in Albany.

After that, we went our separate ways, I went back to school and he went off to wherever (I didn’t know at that point). The following summer, we both realized we had a connection; a mutual love for travel, amongst other things. We then made our first trip to Albany together and shared our first kiss under the 4th of July fireworks.

I ended up leaving camp early that summer for health reasons, but we stayed in touch throughout the year. He then asked me to accompany him to a wedding in Virginia. I had never been to Virginia, so I said yes. I traveled to Charleston with a friend, and then met up with him in D.C. Our airport reunion was all of the clichés you could imagine, and it was wonderful.

So there we were, both of us having traveled to a new destination. We decided to make our relationship official in June of 2015, and that was that. Still having a bad case of the travel bug, we decided to move to Florida together, where we have been living since August.

Since our time in Florida together began, we have been on multiple trips together – to Texas, Atlanta, Maine, New Hampshire, and several road trips include. We have both taken solo trips as well – me to Los Angeles and Key West, him to Maine and New England.

But one thing was absolutely clear to both of us; we wanted to be each other’s travel partners for the rest of forever.

As it happened, this past weekend I found a cheap flight to Indianapolis (my old stomping ground). I planned a girl’s weekend with my two best friends. On Sunday, as we were heading to brunch, out popped my boyfriend on the steps of the Soldiers Sailors Monument Circle, waiting for me. With him he had a note; a note that described our love of travel, quoted F. Scott Fitzgerald, and ended with a marriage proposal. 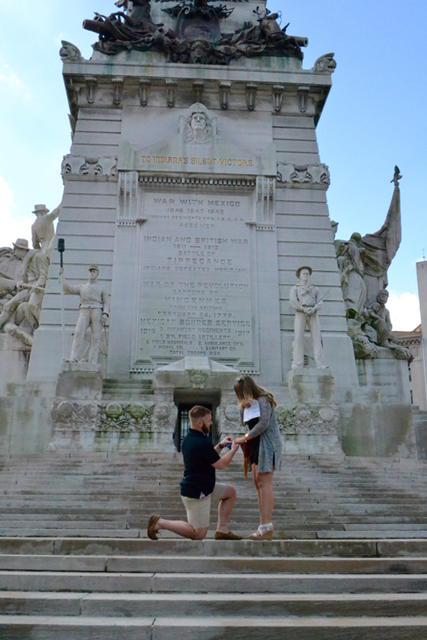