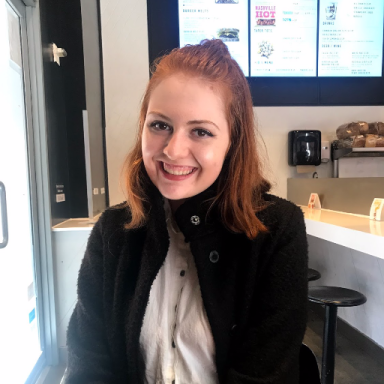 The notion of Valentine’s Day being strictly limited to honoring romantic love is completely false. I consider it to be a celebration of love in all forms—platonic, unrequited, self-love, and yes, romantic. A chance to reflect on all of the relationships we’ve been in— sexual, toxic, healthy, one-sided, and totally fulfilling. More than anything, Valentine’s Day is a day of passion. An invitation to feel things deeply and set your emotions free.

Here are six songs that honor that vision and soundtrack February 14 perfectly.

“Always In My Head” — Coldplay

This track, off of Coldplay’s 2014 album Ghost Stories, will send you into a trance. It leads with a hypnotic, atmospheric instrumental intro that somehow perfectly captures what it sounds like to fall in love. It makes my heart beat faster every time.

Lyrically, it’s simple but sweet. It wastes neither time nor words in capturing the nature of the honeymoon phase of a romantic relationship: the tossing and turning in bed, the inability to get one person out of your thoughts. “Always In My Head” encapsulates the feeling of loving one person so completely that no one else seems as worthy of your heart. The very last line, “This, I guess, is to tell you you’re chosen out from the rest” hits the nail on the head. It’s an ode of complete devotion for the one you love, a wholehearted commitment sealed in lines of poetry.

“Putting the Dog to Sleep” — The Antlers

Clocking in at 5:47, this song from indie-rock band The Antlers is worth its runtime. At its core, it explores the vulnerability in any kind of love— the fear, the swallowing of pride, the pain that knocks you both off of your feet. It’s the idea of no more secrets, of having to be totally honest and transparent. “Prove to me I’m not gonna die alone” is a line delivered as a cry for the promise of security and support from one’s partner. It captures the inner monologues that we’re too afraid to vocalize.

It describes one’s nervousness surrounding the “letting go” of love: the moment of complete surrender to another person, well-aware of the fact that they could break your heart. “Putting the Dog to Sleep” is about giving in to the chase. It’s raw, full of aching vocals, and painfully relatable.

“Bloodhound” reads as a conversation between two lovers, as one desperately tries to support the other in coping with a mental illness. On this track, lead singer Conor Murphy is the “bloodhound,” barking and scratching desperately at the locked door of his lover’s heart. He wants to help heal their trauma, but they are sealed off and afraid to let him in.

The bridge features a chorus of voices that help this song reach its crescendo, its crucial moment. In the end, the “bloodhound” cannot be contained. Like the sea, he eventually floats away from a lover who does not want to be helped. It doesn’t have a happy resolution, speaking to the realities of love deemed too ugly and unsuitable for Hallmark cards. Coexisting with another person means collective pain and suffering; this song doesn’t shy away from that truth.

“Lover of the Light” — Mumford and Sons

This song kicks off with passionate vocals from Marcus Mumford, as he laments the state of a purely sexual relationship. There is a palpable sense of yearning for the relationship to evolve and become more. The line “to have and to hold” in the chorus hints at the desire for a deeper, long-lasting bond with this person.

Around the 0:50 mark, the instrumentals kick in and remain strong throughout the entire track, forming its backbone. The combination of such emotionally-charged vocals and heavy instrumentation is chaotic, loud, and brash. It’s a fight to be noticed, to be recognized by this person as a suitable romantic partner. Love, as captured here, is all about aching for someone else— longing to be seen, to be heard, to be listened to.

“All in White” — The Vaccines

Opening with a heavy, angry guitar riff, the undertone for this song is established right away. It tackles the idea of a toxic relationship: one where you’re well-aware that your partner doesn’t genuinely care about you. It’s a relationship built on manipulation of the truth, where one partner must always be in the right.

“I was always wrong, you all in white” speaks to one partner’s inclination to portray themselves in the best light while putting down the other person. It hits home for those who have ever been in a mentally or emotionally manipulative relationship. It captures the all-or-nothing nature of being loved by someone who cannot be wrong.

“Love It If We Made It” is one of the very best songs of the last decade. It depicts the one-sided nature of a relationship between an entire generation and its country. But now, the kids are fighting back.

The song starts off angry and fed-up and never wanes in intensity. It laundry-lists emotional crimes that America has committed against its youth, including sexism, misogyny, and the fetishization of people of color. It captures the dark nature of what one “lover” (America) has forced the other to do—turn to drugs and sex to cope, distrust their government, and become depressed.

This song ignites passion. Its chorus features a glimmer of hope as lead singer Matty Healy delivers the repeated line, “And I’d love it if we made it.” Even in troubling times, the thought of living through them and eventually finding peace is what keeps the kids running. It’s refreshing, politically and socially relevant, and a breath of fresh air.

Meg is a student, writer, and a big fan of love & curly fries.