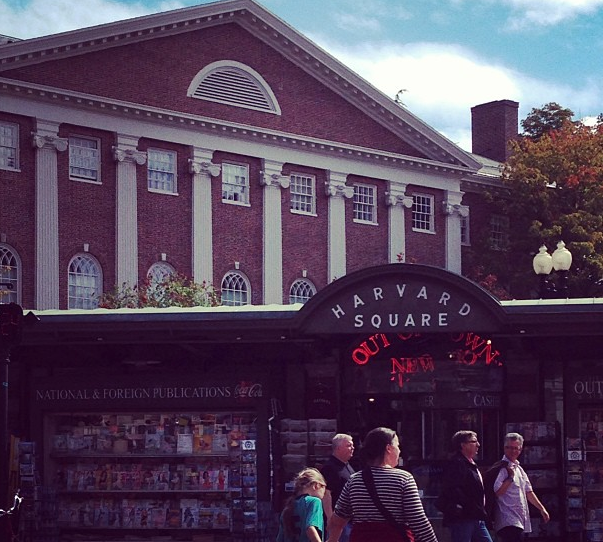 We showed up to our new hometown in a U-Haul driven by my newly single mother.

It was a tedious drive. My brother wasn’t much for car games, but he amused himself by asking me what 2+2 was. I didn’t know. It’s 4, he’d tell me. An hour later, he’d ask again. I still didn’t know.

It was 1993 and we’d picked an apartment complex next to the projects because believe it or not, projects exist in the affluent enclave of Cambridge, MA.

We unloaded. I can’t imagine I was much help as I was probably shorter than the leg of a desk chair. But I was good for morale.

A few years later, we moved to an apartment a mile or so from Harvard Square and it was a great place to be a kid. Cambridge was quiet in the 90s. It was grungy (okay, everywhere was grungy) and earthy crunchy in a way that wasn’t too boastful. There were parks to play in, and I spent a lot of time eating at the Harvard Science Center cafeteria, where they kept the 3 dollar burritos. Our neighbor was filled with senior citizens, and kids my age who were the children of immigrants or professors or both.

Maybe we were destined to become a hipster neighborhood because we really did have herbal remedies and yoga before they were cool. And before they were expensive as fuck. There wasn’t much of a premium on the green teas we bought in bulk at the Chinese food store. Or on the garam masala we’d buy for $1/pound after popping into Hollywood Video.

Last week, I read an article surveying the top hipster cities in America. Cambridge (and Somerville, the adjacent town) made the top 10. They surveyed the number of people ages 20-34, cafes per capita and even the number of yoga studios. Pretty much all that was missing was pounds of almond butter per capita. Cambridge scored off the charts.

So there you have it. My hometown is now a hipster capital.

It’s bizarre to watch people your age infiltrate your hometown, drawn by bougie bars that boast a selection of IPAs and come complete with a kind bartender who is dying to explain the benefits of wet hops to anyone who shows even the vaguest interest.

The survey wasn’t wrong. When I’m home, I offer to meet friends in Boston, which is more convenient for them. But they’d always rather come to Cambridge, because it’s close to their new significant other’s apartment and our supply of overpriced Mexican food never tires.

It’s weird that home is now a neighborhood where people flock to. Like, can I capitalize on this? If we’re now a hipster nation, does that make me an **original hIpStER?

Probably not. I’m too young, only half-white and there aren’t locally sourced minerals in my make-up because my mascara is from Walgreens. (My brother, who is still a condescending little shit but now has a full beard and a brilliant mind, is probably a better candidate.)

All I’m really saying is that I have a new found respect for any kid raised in Williamsburg and the original victims of Los Feliz Day Care, because I now understand what it’s like to come home and be told about the cool new business that opened up in that old warehouse.

But, like, what happens next? Our town – which is home to two Ivys and enough homeopathic remedies to cure the modern world – had the hipster sensation coming. I’m not mad about it. I just don’t get where we go from here.

These places – the Cambridges, or Brooklyns, or Seattles, or Austins of the world – are still changing constantly. Will we tire of the fancy burger joints that name their burgers after politicians? Will we eventually decide the IPAs aren’t strong enough for our now deadened taste buds, and just end up drinking the local, overly floral gins straight from the bottle? How long before the coffee shop wipes off the chalk board outside because someone’s discovered that their honey-lavender concoctions are actually carcinogenic?

These are probably all ridiculous concerns. But the neighborhood around you really is changing faster than you can imagine. So go outside and take some pictures and appreciate it exactly as it stands before your favorite live music spot becomes a Chipotle and your town gets cool without you.

My Boyfriend Disappeared And I Found Him In Thailand With His Ex-Girlfriend, Who Apparently, Was Still His Girlfriend

Do Not Let Other People Rush You In Life