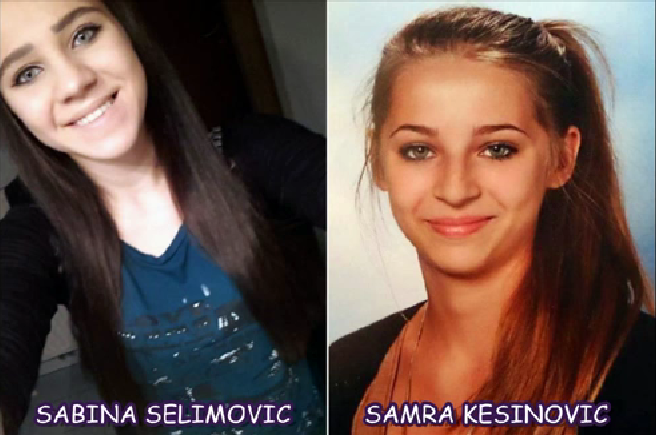 We’re used to hearing ISIS in the same breath as “beheading” and “terrorism.” Now, ISIS is trending alongside words like “Facebook” and “teenager.” Their two poster girls are Samra Kesinovic, 17, and Sabina Semilovic, 15. In April, they left their homes in Vienna and made it to Syria, where they joined ISIS. They each wrote their parents a note saying they were prepared to die for Allah. Samra and Sabina are now “jihadi brides,” married to ISIS militants. Here are a few things you should know about the pair of ISIS teens:

1. They’re using social media to show how much they like their new lives.

They’ve posted pictures of themselves in the their new traditional dress. Just because you join ISIS doesn’t mean you stop taking selfies. In a few of the pictures they’re pointing upward, which is the equivalent of an ISIS gang sign.

Help Find Us: Samra Kesinovic, 16, and Sabina Selimovic, 15. vanished from their homes in Vienna on April 10th. http://t.co/mxAx72NSzb

2. They may not be controlling their own social channels.

It’s possible that to keep a facade, and dispel negative rumors, others have taken over the girls’ social media accounts. One theory is that the images posted may be images of other women. The burkas cover so much of their faces that it’s not exactly a stretch.

3. Sabina just did an interview with Paris Match.

The magazine confirmed that her husband gave her permission to do the interview and that he was present while she texted her answers to the reporter. In the interview, Sabina said she’s enjoying her new life and feels free to practice her religion. She denied the rumor of her pregnancy and raved about still being able to eat nutella. Twist: authorities now think she was held at gun point and forced to do the interview.

Jihad girls who fled to Syria face five years in jail if they return home http://t.co/LWf8rGVqMA #IslamicState #IS

4. One of them wants to come home. We’re not so sure about the other one.

Samra was able to contact friends or family in Vienna (supposedly) and said she wants to come home. Sabina wants to stay. Though, it’s possible she does want to come home and was forced to say otherwise in her interview.

5. Both are believed to be pregnant.

Experts think the women being lured to ISIS aren’t there to fight. They’re there to marry and have children. ISIS is moving toward recruiting more women, in very 21st century ways.

6. If they return to Austria, they could face prison time.

Of course, the safety and well-being of these girls is the main concern. ISIS won’t want to let them go home. If the girls do escape and make it back to Austria, being part of a known terrorist organization won’t bode well for them. They could face 5 years in prison.

7. No one really knows what’s real or what’s fake.

Propaganda is the name of the game. The unfortunate fact is both girls could have already been killed, and we just think they’re alive because of an Instagram feed. Though, if it helps, a Paris Match reporter can find the 15-year-old, even when Interpol can’t.