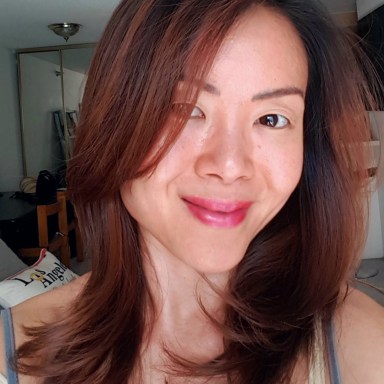 My friend John was glowing. John is usually a bubbly and optimistic person anyway — but that day, he was positively glowing with energy. He looked like he had either won the lottery or fallen in love and I knew that neither was true.

“I just feel that life is suddenly so full of potential and opportunity,” John exclaimed when I asked him about his source of joy. This doesn’t seem like such a strange statement on its own but it is very strange when you consider that John is recently divorced. The most surprising part of our conversation came when I asked John what had changed and he said, “Nothing really. I just had some mental shifts in my head.”

I had been there at the very beginning of John and Colette’s relationship and watched as their beautiful, passionate love affair slowly disintegrated when they grew apart. Individually, they had both experienced immense growth. John had quit his job and pursued his passion for outdoor adventure while Colette had excelled at her career, earning promotion after promotion.

At the beginning of their relationship, John had been a bit more career-focused and Colette had a greater interest in the outdoors. But now, it was clear that they no longer wanted the same things. This realization had led to months of anguish for them both. So, the fact that this change in John came from simply reframing his thinking was astounding.

John wasn’t happy because he was callous and uncaring. In fact, both he and Colette had tried very, very hard to salvage their relationship. He was happy because he had been so very, very tired for so long and now he could finally move on. In the end, they realized that they were holding each other back from becoming the best person they wanted to be and that the most loving thing to do was to set the other person free.

“I wouldn’t change a single thing about it. I’m so grateful for how wonderful it was but I know we can’t get back there. We’re just not the same people anymore,” he said.

They had both mourned the relationship but more importantly, they had celebrated it for what it was — the right thing for them at that time. After months of hard conversations, long hours with a therapist, and many, many tears — here are some of the realizations that John had that helped him become hopeful about life again.

After the first date John went on post-divorce, I got this text from him: “I never have to have mediocre sex again!”

John has always been a very sexual person but Colette is not. In the beginning, the sex had been good but not as passionate and frequent as John would have preferred. John had accepted this fact because there were enough positive aspects in the relationship that made it worth investing in.

However, as the relationship deteriorated, so did the sex, and it eventually became a huge sticking point. That post-divorce date was a reminder to John that though he was losing many things he cherished, he was also losing things he didn’t like about the relationship.

Maybe sex isn’t the issue in your relationship. Perhaps it’s an annoying habit, arguments about money, or an infuriating mother-in-law. Every relationship has downsides that are less than blissful. Remind yourself of what your “X” is and be grateful that you never have to do it again.

2. You can stop investing time and energy in something that isn’t working.

For a long time, John and Colette believed that their relationship was failing because they weren’t working hard enough. So, they doubled down on their efforts and tried even harder. They read books, went on joint vacations, doubled their visits to the therapist, and each came up with a list of things to work on.

But working harder wasn’t the problem. It was that they couldn’t find a future they both wanted. John wanted to buy a van and pursue adventures on the road. Colette wanted to buy a house and build a career. They were both working hard but not towards the same things.

“Rowing harder doesn’t help if the boat is headed in the wrong direction.” — Kenichi Ohmae

John realized that one of the reasons he was feeling so good post-divorce was because he was no longer feeling emotionally drained from trying so hard all the time.

Think about the amount of time and energy you spent worrying, talking about, and working on your past relationship. Well, now you can take this time and put it into something fulfilling instead of a sinking relationship.

Perhaps there are relationships in your life that you have been sorely neglecting or maybe you’ve been wanting to start a workout routine for a while. You might be surprised at how much more energy you now have to devote to other aspects of your life.

3. You can start a new, exciting chapter in your life.

Part of John’s feeling of hopefulness stemmed from the potential to start a new relationship with someone again — to discover a new mind and a new body. He was excited to create new experiences with someone, especially the ones that he could never convince Colette to be a part of.

You now have the opportunity to experience things that may have been lost to you forever in a long-term relationship. Remember the butterflies you felt right before your first kiss with a new love interest? What about the “can’t eat, can’t sleep” honeymoon period of a new relationship? Well, this could happen to you again. If your previous partner was never very adventurous, the opportunity to find someone who is will now be possible. Even if your next chapter isn’t about love, you now have a chance to reinvent yourself.

4. You can be selfish and stop compromising.

The compromises in John and Colette’s relationship happened constantly in big and small things. When they went hiking, John would walk slower than he liked and Colette would walk faster than she wanted to, and neither would fully enjoy the hike. When they were buying a house, John wanted one away from the city while Colette wanted a short commute. In the end, they bought a house in an area that was less than ideal for both of them.

When he was done grieving the relationship, John was suddenly infused with an incredible sense of freedom that he hadn’t realized he had sorely missed.

There is definitely a special luxury of selfishness afforded to single people that people in relationships don’t enjoy no matter how easygoing their partner is. You always have to consider how your choices might impact them, and inform them of your activities.

So, think about something you genuinely enjoy indulging in that you always had to compromise in your relationship. It could be something as simple as a Netflix TV series that your partner hated or something much bigger like an extended trip overseas. Want to spend 8 hours playing video games or stay up all night with friends? Well, now you can— guilt-free.

5. You can reclaim your personal power.

After 8 years of being in a relationship, John had forgotten how to be alone. He was used to having a climbing partner whenever he wanted one or a sounding board for major decisions whenever he needed one. He had become reliant on Colette for emotional support when things got stressful.

In the first few months following the breakup, even a weekend without plans seemed daunting to John. It wasn’t that there was anything he couldn’t physically do by himself, it was that he had stopped cultivating that feeling that he — by himself — was enough.

The breakthrough for John finally came when he decided to stop packing every weekend with social plans to distract himself. He was determined to simply sit with his thoughts that weekend and learn to be comfortable in solitude. Sometime that weekend, he went on a walk. As he stood in the sun with no plans for the day, he thought to himself, “Right this minute, I feel good and I need no one else and nothing else but myself.” He said he had not felt that powerful sensation of self-assuredness in decades.

So create the opportunity to intentionally be alone and to create good feelings by tuning in to yourself. You can do something you used to love doing that you haven’t done in a while, recall past achievements that you are especially proud of, be grateful for the things that you have created in your life, or simply acknowledge whatever feelings you have right now with kindness.

It’s a magical feeling when you have a deep knowing, that you — just you — are enough. It’s that feeling of trusting yourself — your judgment, your choices, and your ability to be happy on your own. It can be incredibly hard to find these things when you are in a relationship, good or bad.

A few years ago, I met an amazing man who taught me what it really means to love. When I ended the engagement, my mother asked me what was wrong with him and I could not come up with a single reason. It was only later that I realized that he wasn’t the problem — I was. I was too selfish and immature to ever create the relationship I desired. I also realized that I had gone from relationship to relationship without ever pausing to reflect on why I kept repeating the same patterns.

Though the events that led to that conclusion had happened during that relationship, I didn’t have the opportunity to grow from it until I was single. Just as periods of rest after a workout are when your muscles build, periods of being single are when you can really reflect and internalize the lessons you learn from your past relationships.

In that period of being single, I learned how to be with someone because I wanted to and not because I needed to, I learned how to appreciate what was truly important to me in a partner, and most of all — I learned to be a more giving partner. I’m convinced that I would not be able to enjoy the amazing relationship I have with my current partner without the self-awareness I gained from my time of choosing to be single.

So, think of being single as a choice. A choice to prepare yourself for better things to come.

“It isn’t what you have or what you are doing that makes you happy or unhappy. It is what you think about it.” — Dale Carnegie

I write about connection — with yourself and with others. I want to hear from you!