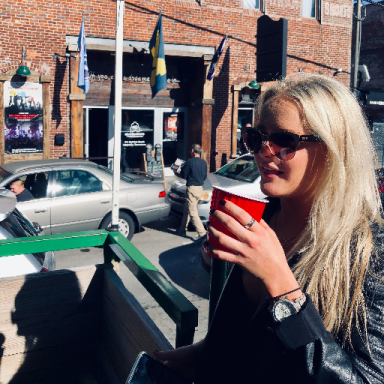 I swear, when it first happened, my heart shattered—not in the cliche way your heart breaks when someone tells you they’re done. I mean, I felt that muscle go rigid, then obliterate into millions of sharp fragments. Then it felt like everything stopped. Like my body was shutting down. Nothing was working properly, and my heart surely wasn’t beating.

In the days after, I swear those small pieces that broke apart in my chest traveled. They got lost in my bloodstream—that was the only explanation for the pain I was feeling. Every time I moved or breathed, those shards would cut inside of me. Everything I did hurt. The particles journeyed throughout my body and it was like being splintered from the inside out. They took their time bruising my bones, aching my muscles and making sure the pain was not only emotional but physical as well. My body was in mourning just as much as my psyche was.

But then, I swear, the fragments started to get smoother. The miles they roamed through my circulatory system whittled them down. The edges weren’t as sharp. When I moved, the pain dulled. I breathed a little easier. Things weren’t as hard. Getting out of bed didn’t take as much energy. Going through the motions was a little less monotonous. Smiling and laughing became less forced. I was less of a shell.

And I swear, those bits are finding one another again. Every day, it seems like one more piece of my heart is coming back together. The soft sections have evolved and fit perfectly in new ways. It is a strong muscle, and just as it is finding its way to becoming whole, so am I. One day, it’ll be a functioning part of my body again, capable of beating properly. In charge of fostering love and compassion for a person. It’ll get back to working as a warm place that uncovers the good in the bad—a home for hope.

I swear I’ll get to that place. But in the meantime, I’m waiting for all the pieces to attach. And every so often, there will be a sharp object that connects from within, and the pain will erupt slightly. But I know it’s a part of the process. They have to bump and bruise to take a new shape and fit into this new heart that is forming inside of me. I will be prepared for the slip ups and the aches in order to get to who I’m supposed to be.

More often than not, I swear through the pain.

But I swear I’m going to make it.

sarcasm is my love language.

Crawling Back Through Us