“If you like him and he likes you, why won’t you date him?”

While in a simple basic understanding of that statement, yes inevitably that would reflect that perhaps dating is a good option. “Dating” –meaning boyfriend and girlfriend titling. Having been faced with various different questions that sometimes I’d rather avoid, I have inevitably started to form what I mean when I say, “I am not ready for a boyfriend.”

It doesn’t mean I don’t like the person I am seeing…It means that I am not rushing anything. I am not saying I would never date someone…I am saying that I am getting to know the person to decide if we fundamentally and genuinely want to be each other’s significant other. It means that at the point I am at I am not willing to consider the obligations that come with truly considering someone to be your boyfriend. That takes time…

Sometimes, for some people, dating isn’t as simple as just liking someone and not wanting them to be with someone else. 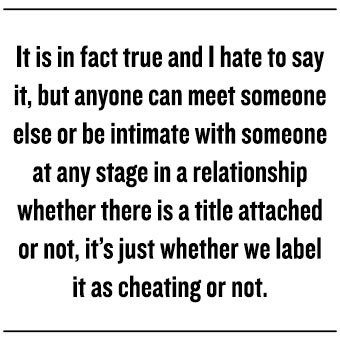 In this culture, it seems as though there exists an idea that you have to date people in order to prevent them having “other relationships,” meaning if you don’t turn someone into your boyfriend or girlfriend, they can inevitably have sex with someone else.

It is in fact true and I hate to say it, but anyone can meet someone else or be intimate with someone at any stage in a relationship whether there is a title attached or not, it’s just whether we label it as cheating or not. It hurts either way if you care about someone.

Having rushed into referring to someone as my boyfriend before and later finding out that we were in no way truly compatible is something that I have a general unwillingness to do again. I will take my time no matter what society demands of me. To me calling someone my boyfriend means you see a real future with the person, which I believe often takes a long time to know. I don’t want to call someone my boyfriend so they don’t sleep with someone else or feel that obligation to me. I want someone to want to be with me so bad that they don’t want to sleep with someone else. I want to feel that at the end of the day I want to invest a part of my heart in that person’s life and in return their investment in my life.

In some ways I love how our culture allows for relationships to form without having to put a title on what it means. For me this has allowed me to be honest with my feelings and how I currently don’t want or feel the need to have the pressure of calling someone my boyfriend. When you take the pressure away from the “title” it allows you to get to know someone without questioning whether ‘holding their hand’ is going to communicate the wrong message.

It’s all very confusing, but for me rushing has never had any positives, so I might as well just take my time.

I Don’t Want To Complain About My Boyfriend. Am I Weird?

Should A Lady Date Multiple Gentlemen At The Same Time?

When Did The Word ‘Commitment’ Start Feeling Taboo?

10 Ways I Know My Boyfriend Is “The One”

Read This If You’re Tired Of Waiting For Love