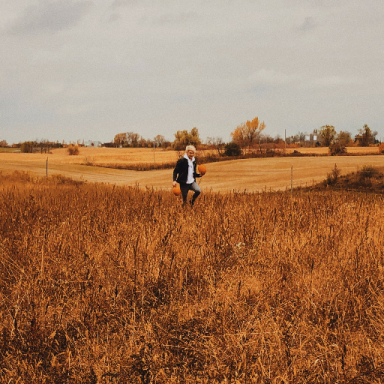 The thing about mental illness is that many people are surprised when you tell them that you have one, especially as a man in society today.

It’s not something that people necessarily like to talk about, nor is it something that we like to show people. But make no mistake about it—many people put on a mask to hide the pain, and so did I for a large part of my life.

I truly believe that each and every one of us has a story to tell. And well, this is mine.

So we bottle up our emotions.

We bottle them up until one day, those repressed emotions come out in even more monstrous ways than we could have ever imagined.

And that’s exactly what happened to me.

Things got out of control fast, and the next thing I knew, I was at the doctor’s office being shown a chart of my weight decline while I heard my Mom bawl her out eyes out in the hallway.

I was frail and sickly and had lost over 25 pounds within a short two months. I was cold all the time. I was as pale as a ghost and my heart rate was dangerously low, sitting at just 40 beats per minute, compared to the average 120.

The doctor told me that he wanted to hospitalize me and hook me up to tubes. My mom thought otherwise. My mom wanted me home.

She convinced the doctor to send me home under strict supervision with the warning that I had to eat or else I could die from exhaustion and starvation. I had to eliminate any physical activity and eat Mcdonald’s as much as I could (which now, sounds like a dream come true to me, but at the time felt like hell).

The next several months were extremely challenging.

I had to sit in the stands and watch my hockey team play as I told them all I had “stomach problems” to save myself the embarrassment of having to tell them the truth.

Meanwhile, everyone knew the truth, and I still had to slay my demons before they slayed me first.

My parents would sit with me at every meal. They would make sure that I would eat everything on my plate and more. My stomach had shrunk so much, however, that I could barely stomach anything. Sometimes, I would sneak my plate when they weren’t looking and dumped it in the garbage.

However, one time I was caught red-handed and they told me I was the one causing all of my suffering. They told me I had the power to change it, too. I didn’t believe it at the time. But looking back, I realized I was the creator of my own misfortune. I was in the confines of my own self-created prison, and if I wanted to finally be free, I had to break free of my beliefs and trust the ones that truly loved me. I had to finally start loving myself again enough to change.

I forced myself to eat, gaining back all of the weight. Even though my mind continued to play games on me, I pushed through with my health in my mind. With my happiness in mind. I just wanted to be normal again. I just wanted to go back to being alive again.

Within three months, I had gained back all of the weight and the doctors had told me that I had accomplished one of the fastest recoveries they’d ever seen. I was allowed to play hockey again and my heart rate had returned to what it was once.

My family was so proud of me. I don’t know what I would have done without them.

But later on, I learned that the physical battle is just one part of recovery. Mental recovery is the true challenge, and that’s when I learned how your mind can either become your greatest asset or your worst enemy.

I remember so clearly looking at myself in the mirror, seeing a version of myself that wasn’t at all what other people saw of me. It’s crazy to look back on now, and it gives me chills in my spine to remember how I once saw myself.

I think many people can relate to this. When you look in the mirror and are drawn to the scratches, the scars, the faults, and the imperfections. Nowadays on social media, we are programmed to believe that we must show only the good side of things. The side that is “perfect”, in a sense. We need to convince others that we are perfectly happy with our lives.

I came to see, however, that social media is only a mere glimpse of the truth, a fabricated reality based upon needing validation from others to make us feel whole. When in actuality, the only answer to our ever-lasting search for happiness is within ourselves.

I began to become aware of my thought patterns and read books on self-development. I began to awaken to what truly is and identify my unhappiness through constant work and journaling.

I am still very much so a work-in-progress, and I always will be. But this was the beginning for me.

From there, my life changed for the better forever. I was able to begin loving myself again. I was able to begin loving life again. I was inspired by people that created a vision for themselves, and I was inspired to create my own. I began surrounding myself with people that lit up my soul, and who loved me for who I authentically was. I began to build strength again.

My eating disorder experience is now over eight years ago. And it turns out, this story does have a happy ending.

I recovered fully physically, mentally, and spiritually, and I am now on my way to living my dream to become a writer. I’m still not sure how I’ll get there, but as long as I’m loving each day towards it, I know I’m winning.

I also experienced the most growth I’ve ever had in my life. I’ve learned since then that everything in life happens for us, not against us. Life is but a subjective perception of how we see it. And the truth is, you choose how you perceive everything that happens to you. Thus, if you don’t like the way you’re seeing the world and yourself right now, you have the power in every moment to change that.

I also discovered the root of my disorder. In other words, the root of my pain. My validation and worth came from outside of myself. I cared so much about my appearance that my entire identity was based around it.

And that is what almost destroyed me. That’s how powerful our thoughts can be.

So to you, the person struggling. The person holding it all in. The person that was once like me, thinking they can’t be helped. This is my message to you:

Don’t allow this experience to define you. Because in the end, this will only just be part of your story, and not the whole thing. A part that one day, you’ll be able to share with others to hopefully inspire them, just as I am hoping to do right now as well.

And as soon as you see what I’m telling you right now, your life will transform forever. That I can assure you of.