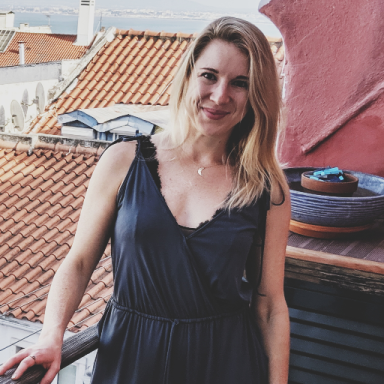 “You’re an earth person,” said Farrah as she pushed one, two, three needles into the back of my neck.

The areas she selected were tender; my body recoiled as she pushed her fingers into the knots before inserting the needles. The twists of tension my back created made the connecting muscles jump, even as I silently pleaded with them to let her in. It hurts less when you relax, they always told me. Doctors with their vaccines, gynecologists with their speculums, and now acupuncturists with their needles. Just relax — let it in.

“I’m a Capricorn,” I replied, my face circled in the massage table’s donut hole headrest, unable to gaze anywhere but the floor. Farrah told me I could leave my jeans on, but I felt more comfortable in only my lacy underwear. Too much material on my skin bothered me, made me itch and fidget and sometimes caused my chest to tighten. Once I told my husband clothes made me claustrophobic, and he laughed but looked worried.

My words sounded shallow as soon as they were out of my mouth. That wasn’t even part of the same philosophy, was it? What is a Capricorn anyways, some sort of water goat?

She brushed passed it. “Your tongue is too purple, your fingers are too cold. Your pulse is quiet,” Farrah continued as her fingers search my back and legs, each journey punctuated by the slightest jab. “Earth people are tied to the spleen. We need to get your blood flowing.”

She wasn’t pleased that I was on birth control pills that did away with my menstrual cycle. I mentioned that in our introductory conversation, along with the tension in my jaw from clenching it every night and the small ache in my head from too much to drink the night before. I did not want to tell her that I was a yoga teacher; these things didn’t seem to align.

I tried to feel the release spurred by the needles. I imagined it like a warm flood across my neck, back, and lower legs. Cleansing me, opening me. It didn’t happen, but I did sink a little deeper into the table. I didn’t want to talk, I wanted to nap.

Farrah wanted to talk. “Do you still think of things people said years ago to you? Do you think about things you said to people and beat yourself up about them?” She had unknowingly summarized my therapy session last week.

“That’s an earth trait,” she said, and I nodded into the donut hole. “You need to practice releasing things. Some people like to write on paper and dissolve it in water. But not you. You need to burn things. You have a lot of fire in you too. Don’t be afraid to burn things that need to go.”

Then I was alone on the table, with instructions to relax, to sleep if I wanted. My neck started to itch and I instinctively reached for it, remembering the needle seconds before my hand made contact. I let my arm fall back down by my side and wiggled to get the itch to subdue. It lingered, taunting and agitating.

I remembered a Grey’s Anatomy episode, or maybe it was the spin-off show, where the pretty redhead doctor who’s emotionally detached gets acupuncture. “I don’t feel anything at all,” she says. Then her face crumples and she starts to cry. The release comes.

A release like that didn’t come for me, just a bad headache. It didn’t come the day after either. But for the first time in weeks, maybe more, I opened my laptop and pulled up a blank Word document, the buzzing white screen crisp and promising, waiting to be filled. Asking for the thin black lines that create words, worlds, and experiences. The symbols that can show you back to yourself. There was a new freedom, like someone had given me permission, thrown out the rule book, removed the blocks.

And I started to write in the way I’ve always wanted to write. And maybe that was the release.

“And above all, watch with glittering eyes the whole world around you"