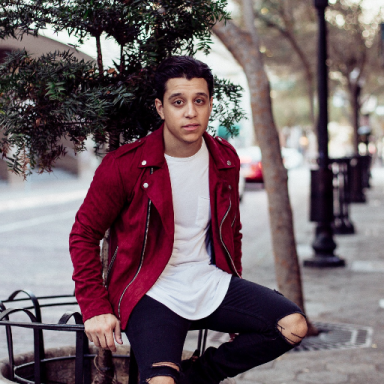 I didn’t start writing because I had this fantasy of being a best-selling novelist, but because I wanted to put words out into the world that would help people the way they have helped me. I wanted someone to read something I wrote and, even if just for a short while, know that they weren’t alone. The pressure I put on myself to write isn’t driven by this obscure idea of success, but by a real desire to help people begin to heal.

I am no stranger to pain. I know what it means to be depressed. I know how it feels to be so crippled by anxiety you feel like you may actually die in your own bed. I know exactly how loud the wrong kind of silence can be. I understand what it is to question everything you thought you knew on a daily basis. I know how it feels to wake up in the middle of the night and have to remind yourself just to breathe, which is why I know how it feels when someone looks right into your darkness and says I see you. I get it. Because I do see you. I do get it. And no matter what that voice in your head is saying, you’re not alone. You never have been.

Things get hard, and sometimes when you think they can’t get any worse, they do. I hate to say it, but that’s just life. It doesn’t always fight fair. Things don’t always work out the way we envision. Sometimes people leave that we thought never would. Sometimes it’s us that leave. I used to see life as a ladder, just climbing one rung after the other until I could reach something that felt a little less like I was just surviving. But life is more like a never-ending roller coaster.

My point is that life will never go the way we want it to. The pieces will never align perfectly. Life was never meant to be controlled. It just goes at its own speed, and you can spend your energy trying to catch up or you can find a way to enjoy the ride. You can settle in to your seat and face the days as they come.

I heard a phrase once when I was younger that used to scare the hell out of me: Nothing is permanent.

I would stay up all night worrying about the things I would lose. I panicked about everything I was so worried would be taken from me that I started to pile them as high as I could carry, until one day it was all too much and everything came crashing down at my feet. It was right around then that I realized that the beauty of the things I held so close to my heart wasn’t whether they lasted or not, but that they existed at all. And on the other end of the spectrum was that none of the pain I felt or would feel would last, either.

You might be reading these words feeling like you’ve been staring at a wall. You feel stuck. You’re in a loop. The anxiety is getting worse. Or maybe you’re deep in the throes of depression and you feel like it’s never going to end. My friend, let me just say it won’t last forever.

Sometimes you have to remember that it’s you that gives your lungs permission to breathe. You’re in charge of the moments that leave you breathless with wonder and not the world leaving you breathless from exhaustion. You are stronger than you give yourself credit for. You have already made it farther than you ever thought you might. You’re not the sum of your broken parts. You are a work of art still being sculpted. So breathe in the process and know that you’re not alone.

For the boys who feel too.