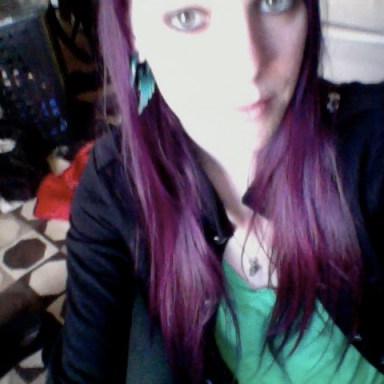 I felt the familiar disturbance of the bed as she shifted her weight, pulled herself up, and sat erect at the bed’s edge with her feet on the ground. Sometimes I would wonder how long she would sit there if I didn’t wake her up.

This time, however, I was especially groggy. I had to wake up for work in three hours and had gone to bed late because she had been drinking again.

”What are you doing? Go back to sleep.”

She didn’t reply or show the slightest response to indicate that she had even heard me. I sat up and gently shook her shoulders, and she came to and finally turned away from that damned corner. She looked at me with confusion in her eyes.

It was always the same. She would ask this before lying back down and going to sleep like nothing had ever happened. We had talked about it before.

It had been happening for a long time.

”Don’t remember doing that.” She said with her back to me as she walked into the bathroom fixing her hair.

She had a keyboard a little ways from that corner in the room, the corner that was only inches away from the doorframe, and sometimes we could hear the quiet clicking of the keys that it makes when it’s not turned on and someone is just messing with it.

That was the only other weird thing that happened besides my girlfriend occasionally texting me or calling me to tell me the house has been weird and that she wants to leave. She told me one time that she woke up in the middle of the night and a black shadow was standing by the bed staring at her.

Both of us are open to the supernatural but skeptical all the same. So really, this was a topic for us that was best avoided. We didn’t like considering the possibility that we were both stark raving mad.

The next night, however, it wasn’t the shifting of her weight that woke me up. Or the cold air that seemed to fill the room. Or the shadow in the corner of the room that was just a little too dark. It was her.

”He’s coming,” she said with her back to me staring at that damned corner like she did every night since we had moved into that house.

”Who’s coming?” I asked, but when I looked to the corner there was no reason to explain any further. In the corner, at the ceiling there was a pitch black, but clearly seen silhouette of a man perched there with his knees bent and his arms outstretched at his sides, palms flat against the walls like some kind of evil bird.

Just staring right back at us. There was black all around him, it was almost liquid-looking, like ink or tar, and as we sat there staring, that tar seemed to be expanding and rushing toward us.

When I woke up it was morning and she was still asleep in bed. I didn’t think much of it, having dismissed it as a bad dream—until she dropped a line that nearly caused me to piss my pants.

”You know, it’s weird. After all this time I finally remember. I came to suddenly and I was sitting up on the bed with my feet on the floor, just like you said, but what was weird is that you weren’t in bed, you were standing in the corner staring at me. When I called your name you wouldn’t respond. You just smiled all creepily until I shouted at you to stop, then acted like nothing had happened.”

”Probably just sleepwalking,” I blurted out.

The words seemingly came from nowhere. A forced breath from my mouth dulled the instant shock and horror that I had immediately felt. I couldn’t resist the urge to turn up the corners of my mouth and smile, a grin that some how filled me with a sense of achievement. The next night when she woke me up, she wasn’t looking at the corner.

She was looking at me.

Nursing student with an odd fascination with nightmares.