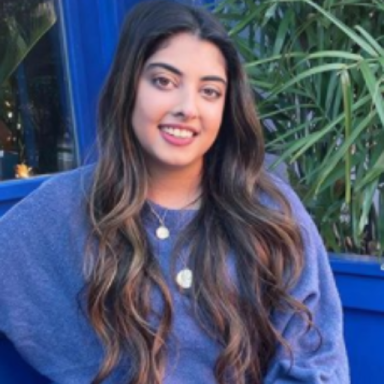 It was almost the end of the day and I’d just half-assed my nightly routine and finally laid down on my bed. Propped up on my pillows and new white Millennial-esque bedding, I was scrolling through the dating apps one by one (also part of my bedtime routine) and finally found myself on Bumble swiping through tens of profile, some left, some right, but no one I was excited about. I’d just had a decent first date the previous night with a software engineer who had already made plans for a second date and started watching Schitt’s Creek on my recommendation, so it didn’t feel right to complain.

I’d almost lost all interest in my own dating life when I received a notification from Bumble. Some boy replied to my routine “Hey!” message. I glanced through his profile again and remembered, “Oh yeah, this is the film guy I thought was cute but had way too many professional photos.” But then again, he had a beard. And his profile said he was 6 ft tall, which meant he was definitely 5 ft 11 in, and I could get onboard with that. I responded and we started chatting away.

Fast forward four months and I can never get this boy to shut up. He has a lot of energy for someone whose brain is always being pulled into multiple directions, and it turns out that energy is infectious. He’s made me more agreeable to trying new things and less conscious about the things I like. And that evolution is now an ongoing discovery. I always thought that dating was about meeting new people and learning about their lives. Only now do I realize how much it encourages you to reflect on yourself and inevitably reveal new parts of your being.

The past few months have felt mentally tiresome and induced unearthed traumas of my past romantic-ships, but they’ve also felt exhilarating. I was finally putting myself out there in all seriousness of the word and surprisingly doing okay. That isn’t to say all my issues were solved and I didn’t need to go to therapy anymore—if anything, I needed someone to hold my hand even tighter now to cope with the anxiety of starting from scratch and being with a new person again. Rather, it meant that I was ready to explore that side of myself that wants a deep, healthy connection and assess what I could bring to the table for someone else.

My biggest fear has always been getting my heart broken. There, I said it. I saw my friends go through it, I saw my own father go through it, and I subconsciously built a glass barrier to avoid it, one through which others can peek through but never cross over. The only way to enter was to shatter the glass, which takes plenty of time and energy, something I never granted anyone permission for until now. My previous romantic situation was excruciatingly and unreasonably long, something I did not realize until very recently. When I admitted that realization to my friends, they obviously hit me with the “I told you so” remix, which, well, I can’t deny. But I kept that situation stretching on and on and on because I had the commitment issues of a crackhead who can only commit to one thing that can only hurt in the long run. He was never equipped with the tools to break down that glass shield, and I never really wanted him to, either. This Bumble Boy, though, as we’ll continue to refer to him, is swinging on a wrecking ball, making dents and cracks with every strike. And for the first time in ever, it doesn’t hurt or feel uncomfortable.

Bumble Boy has also been the most persistent so far. Looking back at my previous plethora of failed/hilarious dating experiences, the only other that stands out is Mr. Israel – I call him that because that was the most interesting part about him as he lived there for years with his father and was very well traveled by privileged-Indian standards for being, you know, American. We had the intellectual chemistry of Shaggy and Scooby-Doo and could’ve truly solved crimes together if we wanted to. Probably a good thing we didn’t work out in hindsight.

Dating in NYC is like dating anywhere, really, except that there’s a lot to do and a whole lot of options to do those things with. If you can grow a thick skin, take nothing personally, and stand your own ground without compromising on your wants and needs, you’ll be fine. If you let a finance douchebag force you to climb five flights of stairs to his studio apartment and pressure you for sex (true story, except that he was a sports manager, not a banker), then you need to change your approach and kindly tell him to fuck himself. And yes, he won’t climb those stairs back down to drop you off but will definitely call you the next day to apologize. That’s when you tell him to go fuck himself again. That experience taught me to never ever take anyone’s bullshit, no matter how cute they are or how much you want to meet the football team he manages.

One rule I had in mind when I moved to New York six years ago was this: do not date an Indian. I moved all across the world to delve into new experiences, and no Delhi boy was going to get in my way. I managed to stick to that fatwa for almost four years until this boy from Bombay I begrudgingly made an exception for. It had been a rough few months—and by rough, I mean hella dry—so I decided I’d go with it. He looked very cute on his profile, lived in Brooklyn, and was not from Delhi. I could do that, right? Turns out, no. Rules exist for a reason, and I should have stayed home because my vibrator would’ve made for a much better date. Aside from the fact that he looked nothing like his photos and was four inches shorter than he quoted, he asked me how many men I’d slept with since moving to New York in a game of truth of dare on our first date. Needless to say, I made an excuse and left five minutes later. Two years down, he still sporadically texts me once in a while. My only regret, aside from actually going on the date, was not telling him off. Unfortunately, I was a shy feminist back then, but I’ve really stepped it up now and promise to do better next time. (Fun fact, Bumble Boy is an Indian Delhi boy. So I’ll also go out on a limb and add that there might be exceptions to every rule.)

While this handful of anecdotes is a semi-bleak representation of dating in the modern era, it’s still enough evidence that each and every person I met revealed a learning curve for myself, whether it might have shown me what I want or definitely showed me what I don’t – they’re both equally important. And I wouldn’t trade these experiences for anything under the sun. Every man I ever went on a date with made me more accepting of different people with different priorities and expectations that I learned to respect. Every time I put on a cute dress and curled my hair in anticipation of those first date jitters, I was making the conscious choice to open up and let someone show themselves to me, which is a beautiful thing. It didn’t matter if they came from a lazy dating app swipe or as a result of Friday night drinks at a bar – it convinced me that everyone has the potential to knock on your own barriers and ask to come in, it’s your choice if you want to let them in or not. But either way, they’ll teach you something new and unexpected.

Except bankers, they all suck. Don’t date them.

I write at odd times of the day when I want to both laugh and cry.

At Least He’s Tall: Some Things I Learnt From Online Dating

I Let My Mom Take Over My JDate Account