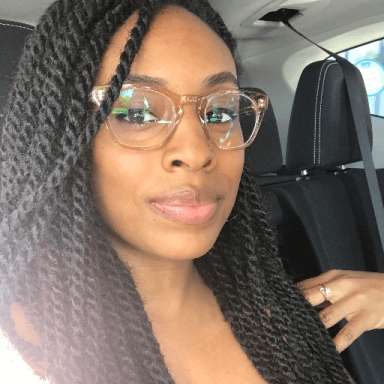 If not yet, there’s a good chance you’ll love a romantic partner deeply one day. Many of us worry about relationships ending—we think it’ll be the end of life as we know it. We’ll question how we’ll move forward.

I’ve been through multiple breakups, and while they don’t feel good, I am still here, living, breathing, and looking forward to loving again. Don’t get me wrong, I haven’t always felt like I could pull myself up by the bootstraps after the end of a relationship, but somehow heartbreak has made me stronger.

Here are seven ways I’ve grown from a broken heart.

1. I stopped wanting to be someone else and started being myself.

I used to have this awful tendency to act in a way I thought men liked. Let’s blame it on all the love stories on TV, in the movies, and in romance novels, but mostly society. Young women are constantly sent messages about how we should behave and what we need to do to get and keep young men interested in us.

I always ended up dating boys, and eventually men, who I shared very little in common with. This meant I relied heavily on oversimplified ideas of what the women those men might have felt more comfortable with would be like, and I acted on those ideas. Of course, that didn’t work, but it took me a while to realize that it never would.

It wasn’t until the universe provided me with the experiences in life I needed to realize that I was good enough just as I was, and that if anyone – friends, family members, and especially romantic partners – didn’t like that, they weren’t for me. I am saying this with the idea in mind that if I am not an unkind, mean, violent, or abusive person. Who I am and who I am becoming is good enough for me and anyone else who wants to be part of my life.

2. I gained a better sense of what I wanted and didn’t want in a relationship.

Because I had no idea who I really was and spent too much time trying to be other people, I had no real sense of what felt genuinely good to me. I didn’t know what I enjoyed about dating and what I didn’t. After several relationships had gone south and I was burned out (read: bitter) by the effort to meet people who might be good for me, I started to do some digging into myself. I started therapy and got to know myself better. I read books on codependency. I journaled a lot and created lists of the qualities I liked about myself and the things I would like to improve. I did the same for hypothetical future partners.

Granted, I still have work to do on myself (that will never end), but I have come a long way. I know that I want someone who is patient with me (I also want to be more patient). I know that I want someone who can laugh with me and at themselves, who is kind and cares about treating people well, who knows that relationships take work and is willing to put forth effort. I don’t want someone who sees no benefit in developing themselves, who is manipulative and narcissistic, and I don’t want anyone who can’t find the worth in other human beings.

3. I started vocalizing and acting on boundaries.

Once I had a better idea of what I wanted, it was easier for me to connect with people. I got to the soul of relationships and found out if values were aligned and if compromise wouldn’t be so daunting.

Previously, even if I knew I was dealing with someone who would sometimes say or do things I didn’t like, and that were beyond my imaginary line of acceptable, I wouldn’t speak up about it. I allowed the mold I wanted to fit into bite down on my tongue. Now, I can’t do that. Sometimes I don’t even know where it comes from, and sometimes it’s nerve-wracking to speak up, but I do it anyway. I speak up because I can — because in many cases, I should.

I was dating someone previously who I didn’t share political views with, and while sometimes people can push beyond that and disconnect ideas to maintain a relationship, in that case I could not. For me, his political views were an affront to who I am as a person, to who others are as human beings. I told him that I could not date someone whose values were not aligned to mine. And maybe that’s not a big deal to you, but again, there was a time in my life when I didn’t know better and I would have let that be. I would have forced myself to push through the discomfort just for the sake of having someone.

I used to put a lot of effort into having someone – I was quite the co-dependent mess. There are still times I think that being cuddled up with someone is the best thing in the world. I would jump on and offline, swiping out of my mind, hoping to meet my prince charming (cuffing season can be particularly lonely).

However, there are so many things I enjoy and can do alone. Sometimes I’ll hop on the train with a good book and no real destination. I’ve come to enjoy working out, whereas in the past I didn’t want to spend any (what I thought was) unnecessary time away from my partner. I like coloring (there are adult coloring books!) and dancing around my apartment in larger-than-life underwear or none at all.

By getting to know myself better, sorting out what makes me feel good, what brings me joy, I realized that there were parts of me that I was avoiding. I was filling voids by focusing my attention on other people. Now I focus more on my own happiness so I can more confidently be single.

I’ve always had insecurities, mainly around my looks. As I’ve gotten older, my weight has become more of an issue for me. I have never really been too large or too small, but somewhere along the way I started to tell myself that my body wasn’t attractive.

The way I felt about myself got worse when I started dating someone who was basically a gym rat. He considered himself a healthy eater and told me multiple times that my eating habits were a dealbreaker. I started to hate my body so much with him that the pressure had the complete opposite effect on me. I started to eat more unhealthily, didn’t get to the gym, and snacked at all hours of the day.

When we broke up, the pressure was gone. When I looked in the mirror, I wasn’t as displeased with my appearance. I started to appreciate my curves, started wearing less baggy clothing, and began to think about how I showed up in the world before entering it.

Most of the time now, I don’t get dressed up, I don’t put on makeup every day, and I am far from a gym rat. However, most days I don’t care about what others think of my appearance. I do what feels good to me in the moment with consideration of my health and wellness.

6. I got back to the things I enjoy and found hobbies.

In addition to long train rides with good books, working on my coloring books, and hitting the gym to ease my mind, I have found hobbies that keep me independent and centered. I started taking language classes, I write more, I make more time for friends and family, and who can pass up a good Netflix binge?

Too often in the past, I would lose myself in my relationships, give up my interests, and attach myself to the guy. The key to not losing myself in recent relationships has been spending time alone, doing the things I enjoy, and only giving time to potential partners who find my time as a privilege – not something that is always available for them to waste.

7. I started to take better care of myself.

We’re not getting any younger, and my mind and body know that all too well at this point. I woke up on my 30th birthday and an energy hit me. I felt a force telling me to get my life together and find joy. I needed to let go of a lot of things and people.

I have been notorious for “going in the trash” for exes, as my friends like to call it. I have given out second changes like candy on Halloween, but just like candy, the benefits to taking past lovers back are low. While I am appreciative of the experiences because they have taught me many things about myself and love, I also learned that the heart sometimes needs a break.

When I began to take a break from dating, I started to pay more attention to my own needs. For example, after one breakup, my credit score greatly increased. After another breakup, my relationship with my family got better. I started using the word “beautiful” after another. Granted, these examples might not be directly tied to heartbreak, but I’m definitely not ruling it out.

Through dating challenges, maturing, and the experience of true love from family and friends, I am taking much better care of myself, and I do this knowing that no lover can ever love me more than I love myself.