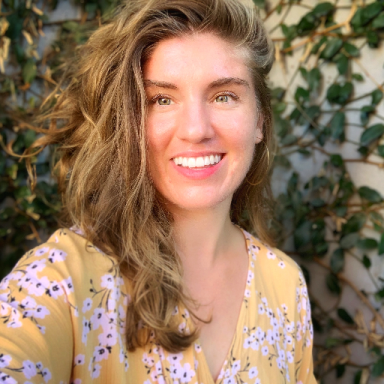 I looked down at my shoes and smiled to myself. Yesterday they had been gray. Now they were covered in a thick coat of beige dust.

As I walked home, two worlds collided under a lavender morning sky. Half of the city was just waking up. Lights flickered on. A pair of ambitious early morning joggers ran by. The man from the newspaper stand in the square was beginning to stack that day’s papers. Then there were the rest of us, the ones who had never gone to sleep.

My brain was exhausted from a long night spent jumping between Spanish and English, but my heart felt full. I had just spent the entire night dancing on the dusty ground of the town’s bullfighting stadium with my classmates.

Had I told my 17-year-old self that in several years she would find herself here, studying abroad in Northern Spain, dancing in a bullfighting ring, she probably would have scoffed in disbelief.

At that age, I really believed that I couldn’t dance, that I had no rhythm or coordination. When I wasn’t at field hockey or lacrosse practice, my body was just an awkward vehicle to carry my brain around.

Ironically, I had grown up dancing. From ages three to 13 I took intensive dance classes—tap, jazz, hip hop, but mostly ballet.

Most afternoons after school I was at the dance studio. With near saintly patience, my mom and brother would hang out in the parking lot for hours while I was in class.

At home, my sock drawer held more pairs of pink tights than socks. My hair was perpetually in a high bun or ponytail, slicked back with hair gel. In most family photos from that time, my head looks like a little bowling ball.

The dance I knew was tightly choreographed and precise. I moved as I was told to. When I deviated from that, there was usually some yelling involved, occasionally a sharp finger in the back or stomach commanding me to straighten up or suck in.

Then seventh grade hit and dance classes suddenly became very serious. We were no longer just children running around in leotards. Some of my peers auditioned for the ballet company affiliated with our studio. Others stopped taking lessons entirely. I felt caught somewhere in the middle and eventually decided to leave.

During this same time, I was required to join a sports team at my new middle school and I chose field hockey. For the first time I could remember, I was encouraged to move my body without restraint.

Instead of precisely pointing my toes, now I got to whack an apple-sized ball down a field and chase after it as fast as I could. I got to be aggressive, loud, and bold. Suddenly, leaving the dance studio where I had grown up didn’t feel like such a big deal.

There are photos of me coming off the field hockey field in middle school and high school, my eyes wild with competition and adrenaline, face bright red and sweaty, hair barely contained. Bowling ball head was no more.

Seventh grade was also the first year of middle school dances. I can honestly say there has never been another time in my life when I have so badly wanted to simultaneously disappear and be seen.

Middle school dances really just seemed to confirm what I had already begun to suspect: my body was awkward as hell. I had been a ballerina for the last decade, but I didn’t really know how to dance like a normal teenager. The kind of dancing that I knew just didn’t seem to translate to any sort of social setting. So, I just tried to figure out the least awkward thing to do with my arms while bouncing up and down to Nelly Furtado. High school dances were not much better, and for the most part, I avoided them.

Then, during the second week of college, a group of us decided we were going to try a dance class together. I can’t remember whose idea it was. I do remember that I reluctantly agreed, prefacing my participation with a nervous laugh and a slew of disclaimers about how bad I would be.

But then, when we were in the class, something strange happened. My body started to remember long forgotten movements. To my surprise, I felt my feet find their way and grow more confident with each step. By the end, I was soaked in sweat and smiling uncontrollably. I wondered who or what had possessed my body for the last 90 minutes.

Curious, I kept going back to the class each week. It only took a few more before I realized that the story I had told for years, that I couldn’t dance, was a complete and total lie.

Growing up, I had danced for perfection, not for fun. At the ballet studio, at middle and high school dances, I had tried to perfect my movements to fit my surroundings. I had honed technique and desperately tried to avoid mistakes. Dance just began to feel like an uncomfortable chore.

But now I had discovered that I actually really loved to dance, even after years of thinking otherwise. My movements didn’t have to be perfect for them to be good. It was freeing to dance just for the joy of it.

And that’s how, three years later, I found myself covered in dust, deliriously tired and happy, walking home after a night spent dancing around a small town in Northern Spain.

These days, that night feels like several lifetimes ago. But if there has ever been a time to dance, to create even the smallest moment of joy and light merely by moving to music, that time is now.

Maggie is a Utah-based writer and creative.