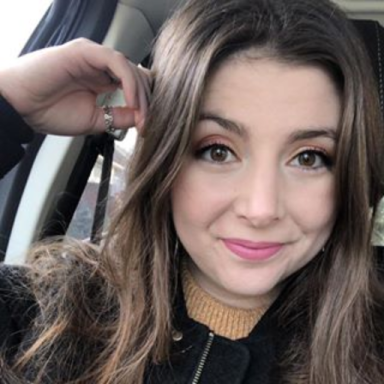 I can pinpoint exactly two moments when I’ve met someone and immediately known that he’d be a very important person in my life. Both times I knew it may not mean I’d met “the one,” but I just had a gut feeling that these men would be around for a while in some capacity, and whatever that capacity or length of time was, it was going to be very significant to me.

The first time it happened, I was 18 years old and ended up dating that guy for almost two years. He was a few years older than me, my first serious boyfriend, and we had a very happy and strong relationship until an amicable breakup that, while heartbreaking, was not altogether shocking, as we’d found ourselves in very different spots on our career, spiritual, and personal journeys. I was devastated, but I soon came to realize that the time was right. I remember that relationship, my personal growth within it, and the many memories we shared with so much fondness.

The second time was a bit messier.

In the years since that first, very formative relationship, I’ve had another relationship of a few on-again, off-again years. I’ve dated casually, I’ve taken breaks, I’ve gone with the flow, I’ve downloaded Bumble, I’ve essentially run the gamut of the millennial dating experience. I met some very sweet guys along the way, but I was stopped in my tracks by a man I met while working on an opera with a local company. I was not in the habit of becoming involved with castmates, but I heard my Jiminy Cricket telling me that something important was going to happen here.

One day, I made a joke in rehearsal, and he sent me a message. We got a post-rehearsal drink, and the rest, as they say, is history. After our second or third time hanging out for hours on end, we breached that dreaded subject: exes.

He’d recently gotten out of a very serious relationship that did not end well, and he was still healing and regaining his confidence and emotional health—he wasn’t ready for a relationship. I, too, had recently hit the final “off switch” on my aforementioned on-again, off-again relationship, so I felt in a similar boat, though the consensus was that mine had sailed a bit further down the river of recovery than his. All things considered, I heard “not ready for a relationship” and had resolved that I was in a similar space. He and I communicated very seriously, honestly, respectfully, and openly about our respective situations, what we were feeling and desiring, and where our limits were, and we ultimately decided to date exclusively but not seriously. To take things one day at a time. Really, what was the harm in just spending time together in mutual companionship with no expectations and no serious commitment? Why not just be single, but together?

We had loads of fun together for a few months. We binge watched Schitt’s Creek, we cooked meals, we talked about religion and politics and the minutiae of being musicians. He was so kind to me and respected my opinions and supported me. We were inseparable; we were hanging out every single night and, if for some reason we couldn’t see each other, we FaceTimed.

Through all this time, however, it was continuously made clear to me, though not unkindly, that this wasn’t a relationship. It wasn’t serious, and due to his plan to move home (a few states away) within a few months, there was a pretty hard expiration date. The exclusivity of our situation paired with the casual nature of “taking things one day at a time” confused me. I felt like I was constantly investing in someone who wasn’t available to invest in me, and I began really struggling with the idea that I simply was not a long-term plan for this man. I was stuck in limbo, and I had to evaluate how I felt about it.

I told myself for a while that this is what one’s mid-20s were for, and that there was no harm in just enjoying my time with somebody until the imminent expiration date. But as I asked myself if I really was okay with it, I discovered a lot about what I want from somebody, and from myself.

I realized that I’m not okay just being convenient for someone. I’ve always known that I give and give pieces of myself and my love, and for a long time I thought that just giving was enough, but I’ve recognized my desire to be loved in return, not just casually. I’ve learned to speak up and to address when I think I deserve more than I’m allowing myself to receive.

I’ve also learned, happily, how sincerely I value a man like this one, who can have these less-than-comfortable conversations and really hear and respect my thoughts and opinions. I still care so deeply for this man, and I recognize that no one is to blame for our situation ultimately ending. It hurt so much to end things—I frequently wonder if things would have panned out differently if we’d met at another time—but I’m proud to have taken a necessary step in respecting what I want and need.

I’ve been able to identify a foundation for what I’m looking for and what I hope to receive in my adult life, and most importantly, I feel comfortable and confident enough to advocate for myself, all because of the not-relationship I shared with this man. The way was not always clean and clear, but it has significantly impacted my life for the better, just as I knew it would.

Maggie is a singer/actor, an avid reader, and a lover of spicy foods.