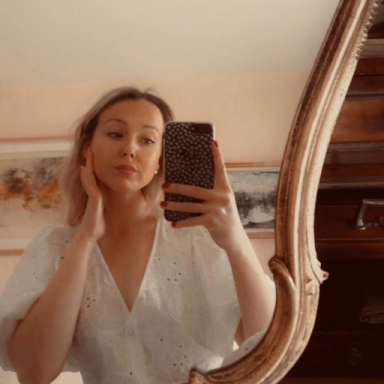 His eunoia was the reason she fell in love with him. Not his grey Panama hat or his matching tweed suit. They thrived and grew in the era of money and parties and alcohol. The summer of 1920 captured them both in a glamorous portrait with a golden frame. The orchestra could be heard from the neighboring state – every trombone, saxophone, and drum. The sound whistled through the marble-floored hallways and skimmed the grand hats of each gentleman with a lady latched to his arm. Striking head garments and silk rippling like the gentle waves on the shore. The air was alive with high-pitched voices and exaggerated laughter. The people were scattering and changing every time the hand danced around the grandfather clock. The flashing lights forming shadows and hugging the faces of the women with chiselled faces. A party infested with fakery, excluding the two humble figures that the strobe light ignored.

Her golden hair was untameable – the ringlets that once were now only vaguely resembled that of beautiful chaos. Her knees were crossed, a champagne flute held loosely between finger and thumb; she was mumbling something about her father and a curfew.

Buttoned up blazer and a jaw overwhelmed with thick, ink-coloured hairs. He had eyes the color of whiskey being hit by the natural sunlight and a vocabulary that made you question your academic ability. He had a pen latched to his blazer and a leather notebook in hand. An artist draws what he sees, an author writes what he feels.

Golden curls, ivory skin, disarmingly unaware of own beauty. Her voice gentle and comforting. Cannot stop writing about her. Eyes resemble winter spiralling into spring. Words could never do her justice.

The summer months were finally smothered with the wintry air and the sky had birthed black clouds. The naked trees stood fragilely along the avenues. And bitterness seeping through every crack in every building. The icy blankets were putting the sidewalks to rest – it all looked like an unfinished painting waiting for a dash of color. A man so filled with ambition watched the masterpiece through a steamed-up window. A coffee mug in one hand, a fountain pen gripped by the other. Blazer still buttoned, eyes the same color as the coffee he sipped. His Panama hat was removed in frustration and the sound of the bell as another late-night coffee lover became endorsed with the warmth and the smell of cleaning products. “No smoke!” A gentle voice apologized. A gentleness that had been described on the first page of the same notebook. The reunion occurred rapidly – hugs and questions and answers and compliments and hand-holding and the clock ticked on and the months between August and November were nonexistent. Her vibrant red lips latched around her mug, leaving an imprint behind. Her vibrant red lips latched to his, leaving a desire to fall in love behind.

Smoke blew from the chapped lips of the loved-up lady – it fused with the air as her gloved hand had fused with his. The sun was falling behind the curtains of the buildings and nightfall rained over New York City. Nothing but optimism flourished within the streets. It had soaked through the snowed-up pavement cracks and into the windows of stores of all kinds: fruit, coffee, and books. The city a labyrinth of back alleys and overpopulated streets. A city that never sleeps. They weaved through the crowd of hats and fur coats – his growling laugh and her piercing squeal bounced through the gaps between shoulders covered in winter-proof fabric. Movie theatres and jazz music, honking cars, and the strongest accents you had ever heard. Every week they escaped. Breathed in the new air, smiled at new faces. Their leather shoes walked upon new snow and the months were ticking by like the hands on the grandfather clock. Time measured feeling and soon the spring months washed over the winter like a tidal wave of adventure and possibility.

A lot of dates. New York City gave us thrills. Her face feels like home. The word love left her lips. Winter to Spring. Like to love. Jazz music and wonder. She wants to introduce me to her family.

Wealth reflected from the grounds of her home. Their garden gave a warm welcome of flowers and cascading ivy, greenhouses upon a neatly mowed lawn. An apple tree acting as the jewel in the crown of the garden. A pond held hands with the cobbled path that the two were following. Their steps in sync, their nerves in sync. The house reflected onto the pond. His head hung down and his hat balanced gracefully. A tweed suit and a notebook were looked down on by the red roses and the reflection of the sun upon the water. The building proudly loomed over the greenery – it was slathered in maturity and nature. Oak floors and a marble fountain that gurgled water melodically. A grand staircase and a huge mahogany table complimented by a tablecloth and daring guests. The man of the table had a gruff voice – “writing is no ambition!” A fountain pen was flung and the ink that splattered across the wall resembled that of his stubble. Tears and screeching and the packing of bags. The roses waved at them maliciously as the door slammed.

Chose love over family. Finally broken free of the world of strict wealth. We have open minds. The 1920s is a time for opportunity. The next step in our relationship: moving in!

Apartment 304: an apartment made for one now cared for two. The single leather chair traded for a sofa decorated with patterned throws. Lamps and plants began springing up and lighting up the once lifeless home. French paintings and a gramophone that always played ‘West End Blues’ by Louis Armstrong. A small oak bookshelf stood grandly in the corner, filled with the likes of F. Scott Fitzgerald and Hemingway. The large window embraced downtown New York and captured every view a person could long for: parades and color and life. They danced to Armstrong and read Fitzgerald. Watered the plants and flung open the windows. He opened his eyes each morning to fluttering eyelashes and a tender kiss. A cramped apartment for two curious lovers. Once a cramped apartment for a novelist and his creations.

New love. New apartment. New furniture. New mind. New novel. Annie is my muse. Our life is my muse. “Tender is the day”. It has been a year since we met. I am in love.

Time instigated change. Golden ringlets to a face-framing bob, elegant dresses were taken from the washing line and replaced with tasselled, lace dresses and matching head garments. No longer a humble figure that the strobe light ignored. Late nights, speakeasies, and dance routines. One night stands and the scent of alcohol that no perfume could ever mask entirely. Broken heels and smudged lipstick. Cigarette ash trailed from the front door to the sofa, leading to a passed-out woman that smells of guilt. In the bedroom where the bed was a double, one side was occupied by drafts and pens with no ink. Candle wax melted down to its last life and an unshaved man with black eyes. Greasy hair and four empty glasses with no traces of whiskey left. The curtains were drawn closed midday to protect himself from the harshness of the roaring sun. A lifestyle changed and an engaged mind trapped in an apartment made for a flapper girl and a drunken novelist.

The man with the tweed suit and the grey Panama hat and the roaring desire to publish no longer stood. Bloodshot eyes, alcohol-stained clothes, and his dictionary mouth stitched closed. He heard the moans from next door and took another shot. His tie as low as his mood, and his passion as dead as the love he once shared with the golden-haired girl. Her conversations with other men being the only time he heard that gentle voice of hers. The only relationship he clung to was with that of alcohol and a fountain pen without ink.

I don’t know the date. And I don’t know my name. But I love Annie and her long golden hair and her fur coat and when she used to hold my hand.

Another man with a cashmere suit and black top hat stood in the doorway of apartment 304. The golden-haired lady had smudged makeup and a tear threatening to fall the way she had fallen all of those months ago. The apartment was torn up. The sofa ripped, the window was tightly closed and the plants died. The gramophone was hidden by dust and a broken bookshelf. Her hand found a fountain pen and she managed to conjure up words of explanation. And she fled, barefoot, out of the lovers’ apartment and into the arms of another without another word.

He bought a cashmere suit to match his grey Panama hat and a new F. Scott Fitzgerald’s novel gives the bookshelf more life. He had purchased another deep red leather chair and threw the French paintings from the window of apartment 304. The gramophone was playing everything other than Louis Armstrong. Whiskey bottles still filled the fridge but the glasses were washed. Dark circles still illuminated his face but the windows were open. Unorganised journals and singular pieces of paper shaped the room. The broken heels and stray men no longer swarmed the apartment – only newspapers and pen lids. ‘ANNIE’. That was what the brown leather notebook had stamped across the front of its cover. ‘1920-21’ it had underneath. The alcohol took him on a journey of ‘Tender is the day’ and left Annie in the night. His mind was infested with empty desires and unspoken words – hers filled to the brim with perplexity. “I wish she knew that-” he paused. “That her mouth now tasted of whiskey just as mine did.” The man removed his blazer and poured himself another glass. His eyes fixated on foreign handwriting:

We lost one another, didn’t we? Our love can never be rekindled, can it? I wish I could ask you this but my Frank isn’t there anymore. You left so long ago. You let me go and I let myself go. If you ever find this, you already know that I’ve gone. But please. When you’re better. Only when you’re better, come and find me. I read the diary entries that you wrote about me. I always wondered why you carried around that notebook. I’ll be waiting for you at

He ripped the tie. He pulled off the shirt. His bare shoulder hit the leather and the spilt alcohol dripped from the note to the floor. The paper began to crumble between his heavy hands. The clock struck midnight. He and Annie were both under the influence of the grandfather clock.

I have lived in 4 different countries in the proximity of 6 days!